The volatility continued in the metals again this week, something that we shouldn’t expect to change anytime soon. There wasn’t much news-flow this week, following earnings season. There are talks about the next stimulus package that could be announced at any time, though it will be just be stop-gap until the two sides can come to an agreement on what will inevitably be a larger stimulus package. This is where the upcoming US elections come into play (note: I'm not political).

If Trump wins, we don’t know what the metals would do in the very near-term but he will be very  supportive over the medium-term as Trump has set records for single-year deficit spending, and record for single year increase of national debt. However, if Biden wins, gold and silver should go up much more in the very-near term and be incredibly supportive of higher prices. To give you an idea, the democrats wanted to pass a $4T stimulus package already, as opposed to the proposed $1T stimulus by republicans.

American Creek: Announced it has expanded its D1-McBride property in the northeast corner of the Golden Triangle. The new claim block covers an area of roughly 2,600 hectares, adjacent to the company’s original 34-hectare D1-McBride property. 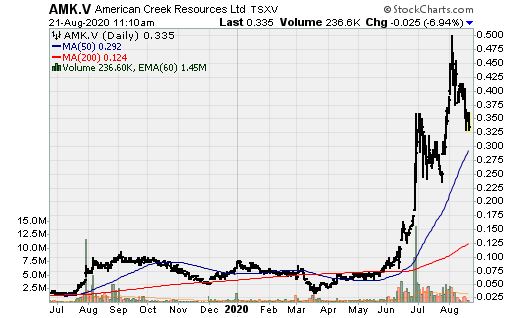 America’s Gold and Silver Corporation: Provided Q2 results as well as an operations update. The company lost money in Q2, driven by the maintenance costs at its Mexican silver operations. This part of its business should generate profits in Q3 on the back of higher silver prices. Higher silver prices will allow the company to target higher-grade silver in the upper zone of San Rafael and develop the EC120 area. This is expected to greatly increase silver production once mining commences in 2022, upwards of 2.5-3m oz. annually.

The company provided an update on the construction of its principal asset, Relief Canyon, announcing commercial production would be delayed until Q4-2020 due to various start-up issues. In early August, the operation began stacking ore and initial leach solution grades are consistent with feasibility expectations. Given the company’s cash position of $16.9m and the delay of commercial production at Relief Canyon led the company to announce a C$35m financing. It was likely this large because the silver price has increased and it will focus on also advancing the Galena complex closer towards production as well as development of the EC120 area, along with completing the Relief Canyon build. 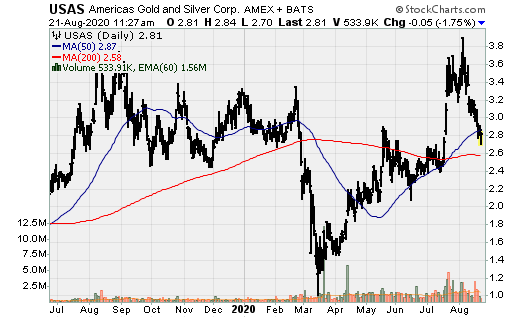 Amex: Reported additional exploration results from the high-grade zone, found in the eastern gold zone on its Perron property. Highlights include: 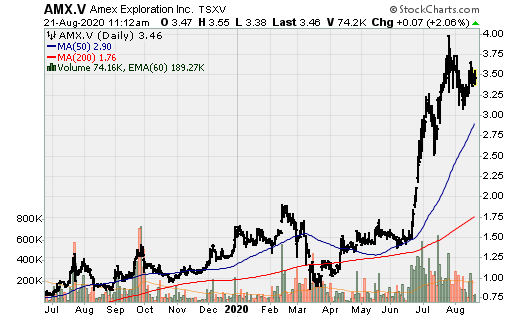 Discovery Metals: Continues to announce high-grade drill results, this time from four diamond drill holes at its Cordero project. These holes are part of the 55k meter drill program that began in September 2019. Drill highlights include: 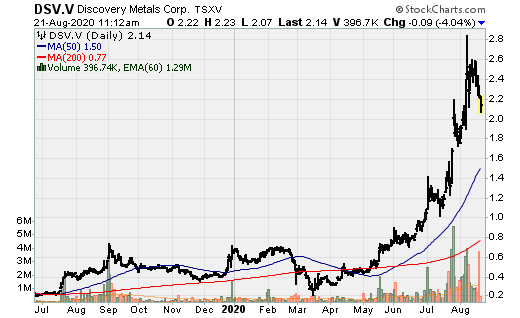 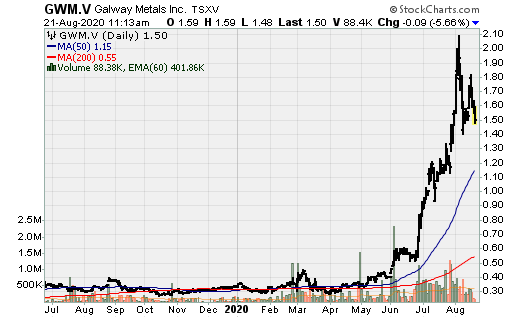 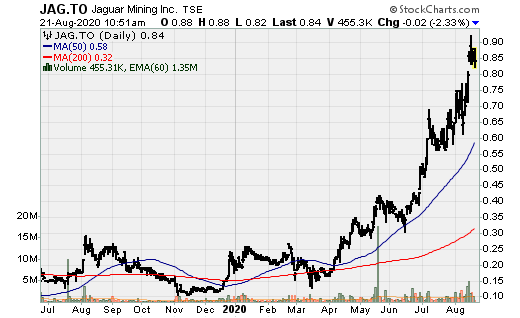 Japan Gold: The company provided an update regarding the Barrick Alliance project activities in northeast Hokkaido:

The Kitami Region of northeast Hokkaido is one of Japan's major epithermal gold provinces with more than 40 historic mines and prospects. Japan Gold has 9 projects with applications and prospecting rights covering >700  of prospective ground within the region, 8 of which are included in the Barrick Alliance. 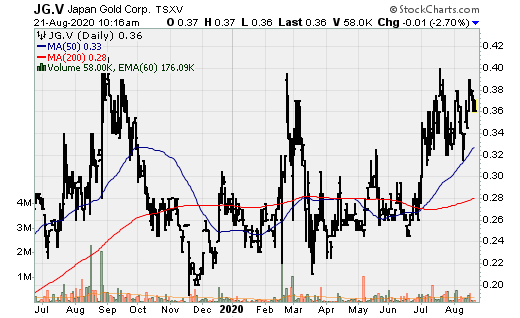 Kirkland Lake Gold: Announced a strategic alliance with Newmont Canada for exploration opportunities around the Holt complex and Newmont’s Timmins properties. Under the agreement, Newmont will pay Kirkland Lake $75m to acquire an option on certain mining and mineral rights related to the Holt mine. The Agreement also includes a commitment by the two companies to work together to identify additional regional exploration opportunities around their respective land positions in the region where they may be able to cooperate in the future to advance projects and create value for both companies.

Under terms of the Agreement, the Option may be terminated by the Company upon the assumption of certain liabilities related to the Holt Mine property. Kirkland Lake Gold will act as manager of Strategic Alliance activities. Ownership of all infrastructure on the Holt Mine property, including the Holt Mill, is retained by Kirkland Lake Gold, and the Option does not involve the other Holt Complex assets, including the Holloway and Taylor mines. Most thought the Holt Complex would be sold as it is considered a “non-core asset” but instead, Kirkland monetized some of the property and entered into what is essentially a JV agreement with Newmont. Kirkland Lake certainly doesn’t need the cash after selling its stake is Osisko Mining for a nice profit and reducing its holdings in Novo Resources. 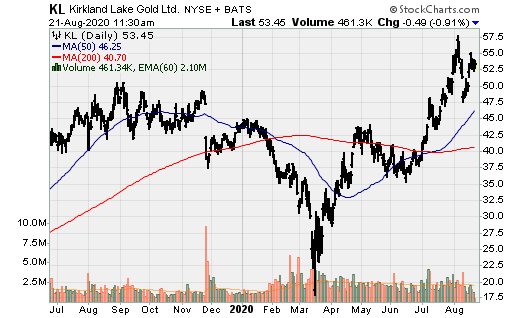 In last week’s issue, the strong ownership was discussed as many people, including myself, have high hopes for the company.

Northern Dynasty: The company updated the resource estimate at Pebble. Because there has been a lot of opposition against the building of this mine, it certainly helps that in this MRE, the rare-earth element, Rhenium resources increased by 84%. Rhenium is a categorized as a strategic metal, which could very well make permitting easier going forward, only time will tell. The US currently relies on foreign producers for 82% of its Rhenium needs. The resource is as follows: 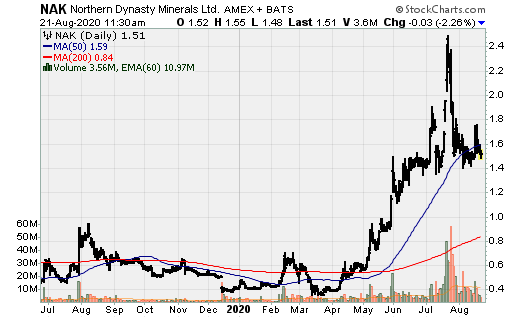 QMX Gold: Announced the results from the on-going exploration drill program on the Bonnefond deposit. Drill hole 17315-20-121 was completed to test the deposit at depth and provide structural and geological data to advance the geological and grade-model of the deposit. Highlights include: 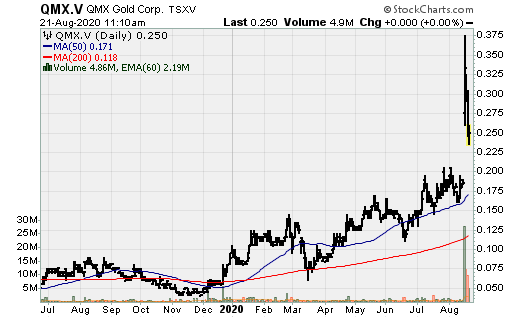 Sabina Gold & Silver: Reported first results from drilling the high-grade corridor at Umwelt underground at its Back River project. Assays have been received for the first three of six drill holes completed at Umwelt following up on the strong results of higher-grade drilling at the Vault zone from 2017-2019. This year’s drilling is to test whether the higher than average grades encountered in the Vault zone extend up plunge to the bottom of planned open-pit. This could provide an opportunity to revisit mine sequencing, mining higher-grade underground material earlier in the mine life. Highlights from these first three drill holes include:

Sabina’s Back River Project is shovel ready so it seems that the company, at this point, is essentially burning cash. It is already a large, high-grade project with over 7.2m oz. of gold resources. It has already been advanced to the feasibility level, illustrating exceptional economics with a 24.2% after-tax internal rate of return (IRR) using a $1,150/oz. gold price. Relative to its peer group, it has one of the lowest capital intensity ratios (Initial capital investment to build the mine as a percentage of its market capitalization). Per the 2015 FS, the project would produce 250k oz. Au over the first 8-years of production with cash cost and AISC of $534/oz. and $620/oz. There have been three new discoveries since the FS, which have shown to be higher grade and would extend the mine life. Using a long-term gold price deck of $1,800/oz. the IRR is upwards of 54%, which is exceptional for a project of scale. 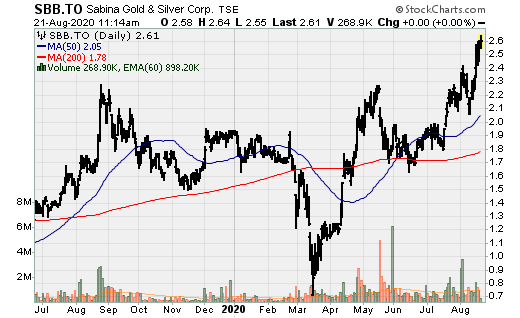 Victoria Gold: Exciting news-flow continues for the company, having achieved commercial production on July 1st. Additional high-grade intercepts were encountered within much larger, lower grade intervals. Many of these are multiples of the reserve grade (which is just 0.65 g/t Au). Gold assay results have been received for the first five step-out drill holes and high-grade gold intersections have been identified in every one of these holes including:

The 2020 exploration program, to date, includes:

Victoria Gold remains a top-takeover candidate given the scale of its operations [195-210k oz. p.a.] over an initial 11-year mine life with AISC below $800/oz. 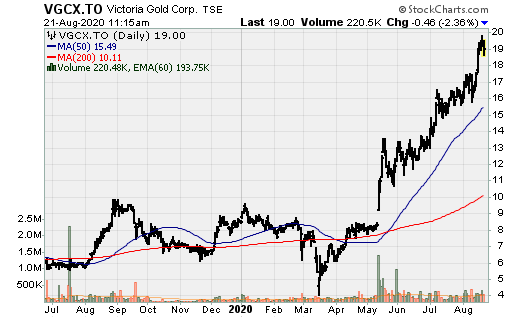