17 hours 38 minutes ago
The Short Position in SLV
23 hours 45 minutes ago
Here Is Why Silver Demand Will Climb to a New Record High! - Keith Neumeyer
4 days 1 hour ago
This Is Why NOW Is the Perfect Time to Buy Silver - Garrett Goggin
4 days 1 hour ago
Rico Charges Dropped On Silver Manipulation Trial
4 days 22 hours ago
Has Inflation Been Defeated?

Battered gold and silver markets face a test of their bull market prospects.

For gold, a bullish trendline has been in force since late 2018. 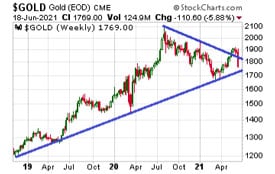 The gold market also formed a large symmetrical triangle pattern from last year’s peak. Prices appeared to break out of the triangle to the upside last month. But last week they fell back into the triangle, which now appears to be nearing its apex.

Obviously, holding above trendline support in the mid $1700s will be crucial for the bulls. A powerful upside move could follow.

But chart patterns are only probabilistic, not deterministic.

What determines prices is supply and demand. Investors would be wise to focus more on the long-term supply/demand fundamentals of what they are buying and less on the recent price momentum.

Yes, precious metals prices can be moved by large institutional traders on futures exchanges. Most of them have no desire to take possession of physical bars and no interest, necessarily, in the fundamentals of the physical market.

The concentrated short position and the manipulation enabled by it is often a great source of frustration for gold and silver investors.

It can also be an opportunity. When exaggerated downside moves are engineered in the paper market, such that spot prices diverge from physical fundamentals, the artificial discount makes it attractive for buyers to accumulate more ounces.

Of course, the single biggest market manipulator of all is the Federal Reserve.

Fed officials need not intervene directly in most cases. Often, they don’t even have to make a single policy move to effectuate market outcomes. Their words alone can move markets.

That’s exactly what happened last week. Fed Chairman Jerome Powell along with some of his central planning colleagues sounded off on inflation and the likelihood of monetary tightening.

Equity and precious metals markets reacted to this vague talk as if it represents a hawkish shift in monetary policy.

The reality is that the Fed is way behind the curve when it comes to taming inflation. Even if the FOMC did pull off a couple rate hikes in 2023, those baby steps would only represent a slightly less dovish, slightly less accommodative stance – not an outright shift to tight monetary policy.

The Fed hasn’t yet acted at all in response to the recent inflation surge showing the Consumer Price Index exceeding 4% (and other, alternative measures showing inflation running even higher).

Based on that, monetary policy is actually getting looser relative to inflation. Real interest rates are dipping deeper into negative territory.

And that is very bullish for precious metals markets.

The bearish case for gold and silver presumes that high inflation, as Chairman Powell assures us, is transitory.

The “transitory” meme has been repeated so often in the financial media that it may seem like a universal consensus among the so-called experts.

It isn’t. None other than the Fed’s close partner in the financial system, JPMorgan CEO Jamie Dimon, disagrees.

“I think you have a very good chance inflation will be more than transitory,” Dimon said recently.

And loose monetary policy will clearly be more than transitory. It will be years – if ever – before the Fed actually gets out front of inflation with a positive real Funds rate.

That means cash will effectively be trash (a guaranteed loser of purchasing power) for the foreseeable future.