Long-time readers of The Gold Update know that we don't overly dwell on that produced by our very respected great and good fellow precious metals' colleagues for but one reason: we simply desire our attention span (such as 'tis or 'tisn't) to be focused upon what we directly glean from our own analysis.

Indeed as we've come to quip with respect to the Fin n' Social Media at large: "Others parrot; we do the math".

'Tis by such simple construct that we fundamentally "know" the S&P 500 (3845) is +62% above its earnings valuation and that Gold (1806) is -53% below its U.S. Dollar debasement valuation. Hardly rocket science; rather grammar school arithmetic. And as history proves, such excesses always, always, always revert to their respective means, i.e. valuations.

Regardless, (blinders or otherwise) we regularly swerve past quite a bit of precious metals hype, (which -- inevitably given the aforementioned means reversion -- will out). Still, an eye-roller that crossed the email transom this past week proclaimed "The Price Of Silver Just Had A Historic 10-Year Breakout!" Knowing obviously that it hadn't, we nonetheless pulled up the Silver chart for the past ten years-to-date: it hadn't. Moreover, Silver (23.92) faces significant overhead structural resistance from present price all the way up to 30.35. The defense rests.

The point is: amidst all the rightfully wishful thinking/hype out there that Gold at any second is suddenly going to shoot up +$1,000/oz., hardly is that reflected by price's trading range which remains fairly staid. To wit, the following chart is of Gold's "expected weekly trading range" (EWTR) for this year-to-date. (For you WestPalmBeachers down there, this is not the price of Gold; rather 'tis the trading range we expect to see by points for each ensuing week). And save for the volatility surge as the RUS/UKR war first unfolded in late February, Gold's EWTR is essentially hype-less: 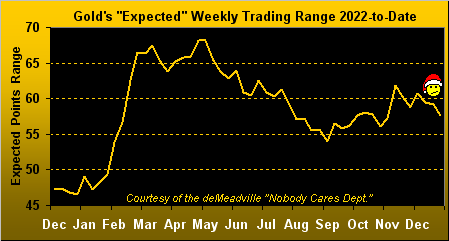 And yet inanely through it all, Gold remains unnoticed given the ongoing Investing Age of Stoopid (from the retail rookie up through the investment banker) as dominated by the LISAIG (low-information, short-attention-span, instant-gratification) crowd.

Thus "The Now" continues as we turn to Gold's weekly bars from a year ago-to-date, the blue-dotted parabolic Long trend seven weeks in duration. Whilst price has languished these recent weeks (the last four weekly settles being 1811, 1809, 1803 and now 1806), Gold nonetheless has made four consecutive "higher lows": that has not occurred since the early weeks of the RUS/UKR war, but it does statistically suggest a "lower low" is in the imminent offing. As for the overall state of this current Long trend, we've mentioned throughout that a total points gain by historical follow-through would eclipse the 1900 level ... but for the present the equally-mentioned purple-encircled resistance (arguably aided and abetted by those shamefully evil COMEX price suppressors) of the 1800s has thus far been in charge: 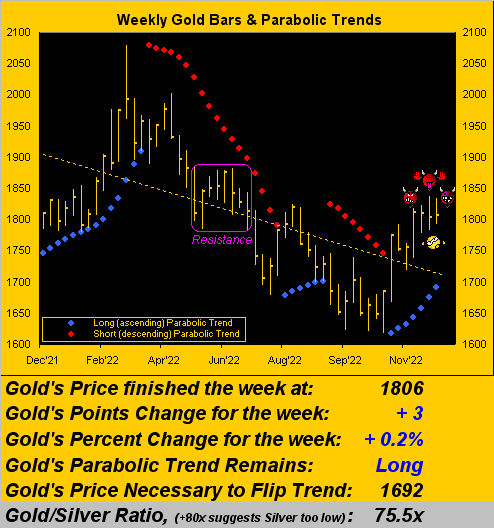 Note at the foot of the above graphic's table the Gold/Silver ratio now being down to 75.5x: 'tis its lowest end-of-week reading since that ending this past 21 January. 'Course, the millennium-to-date mean is 67.2x which solely in that vacuum means Silver "ought be" +11% higher at 26.86 than its present level of 23.92. "Got Silver?" Don't just be meaning to so do.

Still as fundamentally far higher ought be the precious metals, we've a couple of near-term technically negative notes:

■ For Gold: the current "front month" contract (February 2023) by its daily parabolic trend just flipped to Short from the 1801 level; there've been five prior like Short signals since August, the average downside follow-through being -51 points, (just in case you're scoring at home);

■ For Silver: as we'll see further on in this missive, her "Baby Blues" of linear regression trend consistency just dropped below their key +80% level; that has occurred three times prior since this date a year ago, and the average downside follow-through has been -1.31 points, (just in case you're prudently managing your cash).

Unlike you, it appears the United States Congress does not prudently manage its cash, (of which in REAL terms it has none). We just read that inclusive in funding this latest $1.7 trillion "raison d'être" budget, nearly one-half trillion dollars shall come from the taxpayers. So can SecTreas Janet "Old Yeller" Yellen sell enough debt to come up with the other $1.2 trillion? Plus another one-half trillion dollars to pay the annual interest tab? "Yo Jay, babe, I need more dough..." Understatement. "Got Gold?"

What the U.S. economy just got this past week was a +0.3% upward revision for the final read of Q3 Gross Domestic Product (to 3.2% annualized). To put that in perspective, final GDP revisions of +0.3% or more actually have happened for 33 of the past 98 quarters (since 1998), so 'tis not that surprising, especially as the Economic Barometer clearly showed growth for Q3 as we here see. You point the way, Mr. President: 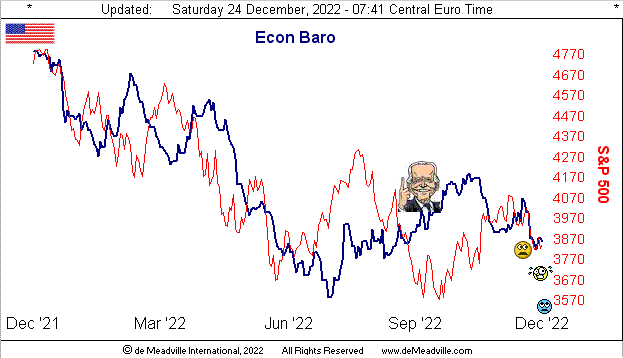 'Course since that up spree, Q4 has held little glee. Amongst this past week's parade of incoming metrics for the Econ Baro came the Conference Board's November read of Leading (i.e. lagging by the Baro) Indicators, a -1.0% drop which was not only the worst since the inception of the COVID-induced shutdown during March/April 2020, but ex-COVID the worst monthly drop since we began gathering these metrics 25 years ago! WHOA!

There were a couple of bright spots (rather unbelievably) as November's New Home Sales gained ground over those in October, and December's Consumer Confidence got a good bump from 101 to 108. Hmmmm...

Still, December's National Association of Home Builders' Index slowed, as did November's Existing Home Sales, Building Permits, Durable Orders, and both Personal Income and Spending. But Santa did leave a gift for the Federal Reserve: their favoured inflation gauge of Core Personal Consumption Expenditures ticked down from +0.3% to +0.2%, in turn an annualized rate of +2.4%. "But raise rates we must!" ... (if in the Fed we trust). And now a week way from New Year, Dow Jones Newswires chimes in (per a Wall Street Journal poll) that "Americans Expect Worsening U.S. Economy in 2023." To stay ahead of the herd, mind the Econ Baro.

We're minding the following two-panel graphic of Gold's daily bars from three months ago-to-date on the left and 10-day Market Profile on the right. Price's recently running out of puff is just cause for the baby blue dots of trend consistency to be curling down. Too, as was the case a week ago, price remains mid-Profile with the dominant volume trading resistors and supporters as labeled: 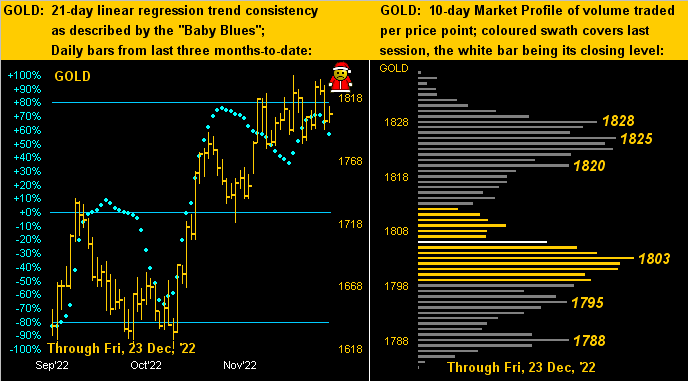 And because Silver rightly has adorned herself in her precious metal pinstripes (rather than her industrial metal jacket), her two-panel graphic is keeping fairly in sync with that for Gold. The concern here (as noted earlier) is Silver's "Baby Blues" (below left) having fallen below their upper axis at the +80% level. The notion thus is a retest of the labeled 15 November high at 22.38. That in turn would see Sister Silver slide off her present Profile (below right): 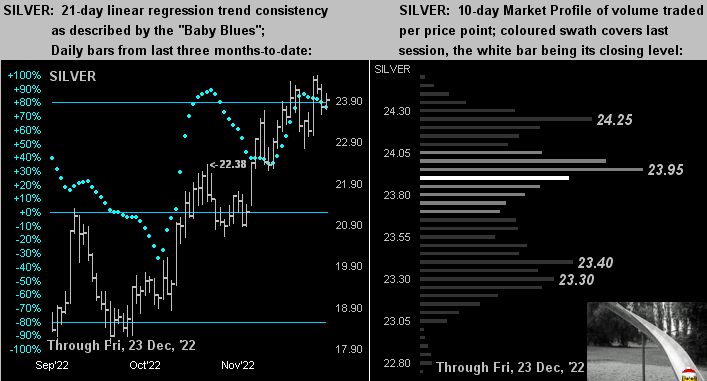 Thus for both Gold and Silver, we anticipate by the technicals a bit of weakness just near-term; yet how joyous 'twould be as we enter the final week of 2022 to have the investing world wake up and indeed load up on the precious metals in positioning for 2023! With but four trading days to run until then along with a very light EconData calendar we'll simply have to wait and see.

For this missive, we'll finally pen with a peek at the ¥en. Upon awakening this past Tuesday, our ¥en screen was sufficiently alarming that we were initially swayed to ring Squire as to a "bad data issue", for this is what we saw: 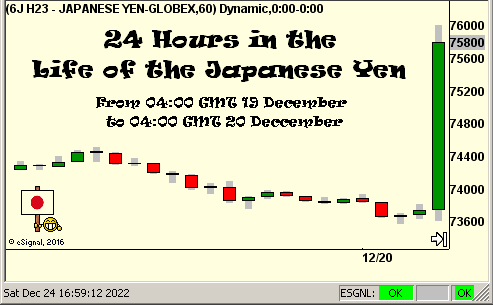 "And I was out of cell range up on the slopes of the Grossglockner, mmb..." 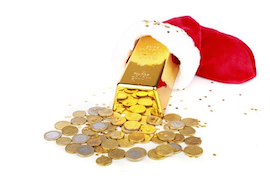 A Most Merry Christmas to Everyone Everywhere!