November 10, 2021 Gold's Run Shows Interest Rate Hikes Not Coming Soon
October 28, 2021 Case for 'sticky' Inflation Strengthens, As Energy Crisis Intensifies
October 17, 2021 Is the Us Willing to Give up the World's Reserve Currency to Fix Its Trade Deficit?
September 22, 2021 Evergrande not a Minsky Moment
September 14, 2021 In Gold We Trust

These batteries consist of an anode, cathode, separator, electrolyte and two current collectors (positive and negative). The cathode contains lithium, either in the form of lithium carbonate or lithium hydroxide, while the anode is made up of graphite. There are no substitutes for either in a Li-ion battery. 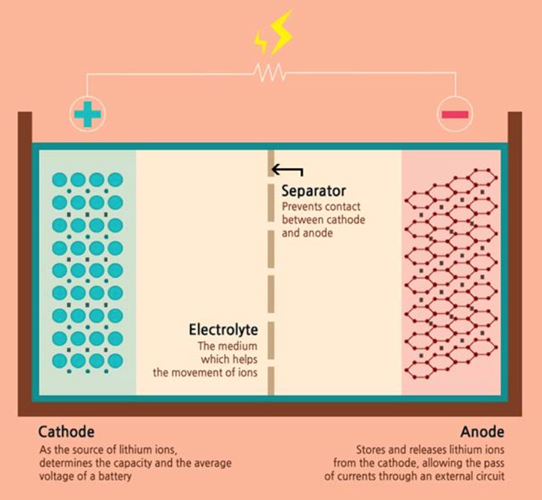 Schematic of a lithium-ion battery

Favorable supply-demand dynamics, in play mainly due to the growing electrification and decarbonization trend, have sent lithium prices on a tear. According to Asian Metal Inc. data, China lithium carbonate has almost doubled in just two months, and lithium hydroxide is up more than 70% over the same period. Remember, both lithium products are used in the lithium-ion battery cathode. 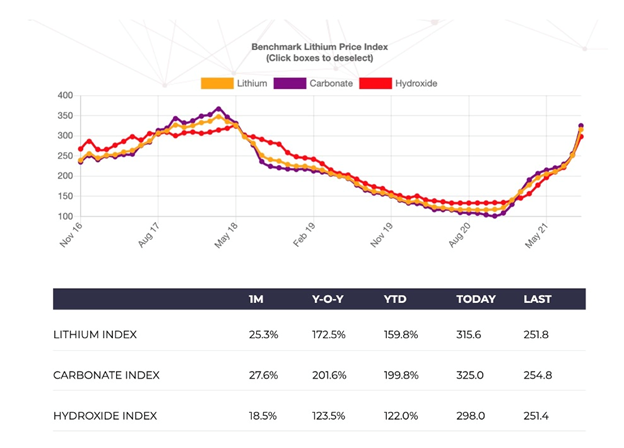 The rally comes amid a global push for less polluting energy sources, which has automakers and battery manufacturers racing to secure supplies of so-called “future-facing commodities” such as lithium, obviously a key battery ingredient.

Curiously, a metal that often gets left out of the hype over lithium-ion batteries is graphite.

There is no substitute for graphite in an EV battery and lithium-ion batteries are expected to be the technology that runs electric vehicles for the foreseeable future, making graphite indispensable to the global shift towards clean energy.

Before going deep into the graphite market, a bit more on lithium and lithium batteries will illustrate the fundamental shift that is going on, away from fossil fuels and towards electrification, that will carry both lithium and graphite along for what is almost certain to be a multi-year ride.

Lithium has a hot hand

The global lithium-ion battery industry is expected to grow at a CAGR of 16.4% from 2020 to 2025, reaching USD$94.4 billion by 2025 from $44.2 billion in 2020. Growth will be driven not only by the need for plug-in electric vehicles and hybrids, but grid storage applications for which the dominant technology is lithium-ion.

Demand for lithium carbonate is expected to rise at a compound annual growth rate (CAGR) of 10-14% until 2027, while lithium hydroxide demand is seen climbing at a 25-29% CAGR.

A recent study by BloombergNEF shows that 5.3 times more lithium will be demanded by 2030 compared to current levels. 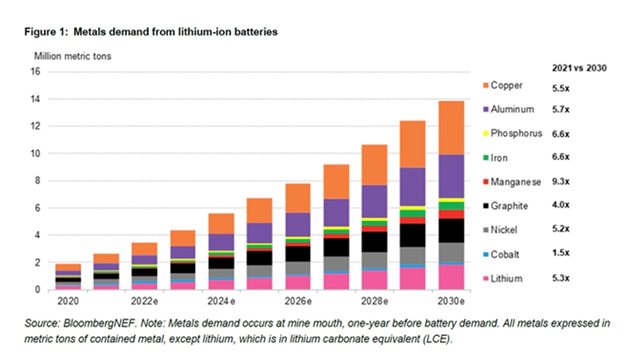 Other reputable sources are equally bullish on EVs and grid-scale electricity storage.

Australian bank Macquarie forecasts a global EV penetration rate of 16% by 2025 (battery electric vehicles and plug-in hybrids combined), and by 2030, 30% globally and 41% in China — a scenario that would push spodumene (hard rock) prices above $720 a tonne, lithium carbonate above $13,000/t, and lithium hydroxide over $16,000/t.

Much of lithium demand is being pulled by the second-largest electric car market in the world behind China, the United States.

President Biden has set an ambitious target to make half of new vehicles sold in 2030 zero-emissions vehicles.

His $1.2 trillion infrastructure package, passed by the Senate but not yet by the House of Representatives, includes transitioning the US transportation system to battery-powered vehicles and supporting renewable wind and solar energies over carbon-based sources like coal and natural gas.

An even larger $3.5 trillion spending package is also under consideration by the House. It includes:

North America relies heavily on foreign supplies of critical minerals — the raw materials it needs to become a leader in high technology, transportation, energy, and defense. Materials like lithium and graphite.

The United is thus scheming to expand its domestic lithium sources, having listed the battery metal as a critical mineral back in 2018, to lessen its reliance on foreign production.

China produces roughly two-thirds of the world’s lithium-ion batteries and controls most of its processing facilities.

One way to meet the threat of foreign countries restricting, or embargoing, critical minerals, is to encourage the domestic exploration and mining of these metals.

Here at AOTH we have been advocating for the creation of a “mine to battery” electric vehicle supply chain in North America for years, something that is finally appearing on the radar screens of governments, large mining companies, automakers and battery manufacturers.

There are a number of battery plants in the works to join Tesla, whose first gigafactory in Nevada started production of battery cells in 2017. The company has a plant in Buffalo, New York, and plans to open a third (US plant) in Texas by the end of this year. Tesla also has a “pilot line” at its facility in Fremont, California, for R&D technologies.

In 2020 General Motors announced plans to install its first battery cell factory in Ohio, a project called Ultium Cells launched with its Korean partner LG Chem. The latter opened a plant in Holland, Michigan in 2013.

Another South Korean company, SK Innovation, is planning on opening the first of two battery plants in Georgia early next year; the company is a supplier to Volkswagen and Ford.

The latter along with American auto icon GM have big plans to electrify their fleets. Ford announced plans to boost spending on electrification by more than a third, and aims to have 40% of its global volume electric by 2030, which translates to more than 1.5 million EVs based on last year’s sales.

GM reportedly aspires to halt all sales of gas-powered vehicles by 2035, with plans to invest $27 billion in electric and autonomous vehicles over the next five years.

The latest automaker to commit to the US electric car market is Toyota, which said this week it will invest about $3.4 billion on American battery development and production through 2030. 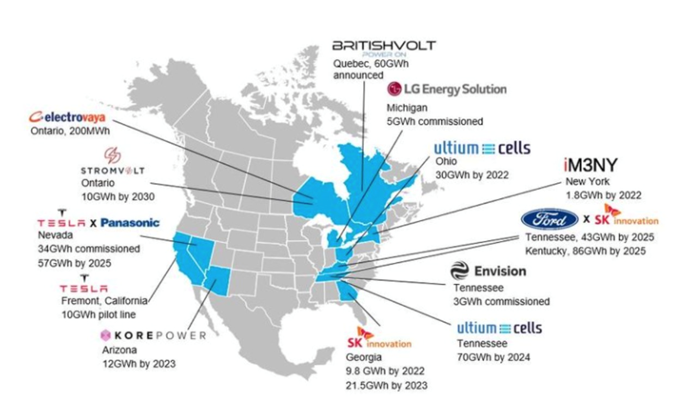 There are currently 11 EV start-ups racing to catch up with market leader Tesla, fueled by money from Wall Street. They include Rivian out of Irvine, California, Lucid Motors based in Newark, CA, Lordstown Motors from Ohio, Nikola Corp (Phoenix), Fisker (Los Angeles), Faraday & Future (Los Angeles), Canoo (Torrance), NIO, Li Auto and XPing from China, and Arrival, based in London.

This gives you a sense of the extent to which the EV lithium battery market in the US is growing.

Graphite poised for a breakout

A Tesla Model S with a 70kWh battery uses 63 kilograms of lithium carbonate equivalent (LCE) — the standard industry measure of lithium production. The Chevy Bolt has a 60kWh battery so the weights are comparable.

The average plug-in EV has 70 kg of graphite.

Every million EVs requires in the order of 75,000 tonnes of natural graphite. This represents a 10% increase in flake graphite demand.

In the last section we outlined the criticality of lithium, however for the US graphite is more difficult to come by.

Graphite is included on a list of 23 critical metals the US Geological Survey has deemed critical to the national economy and national security.

North America produces just 4% of the world’s graphite supply, from mines in Canada and Mexico. No US natural graphite production was reported to the USGS in 2019 or 2020.

China, Brazil and Mozambique are responsible for most graphite mining, with China producing about two-thirds. More importantly China controls 100% of the market for spherical graphite, the kind needed for the anode part of a lithium-ion battery. 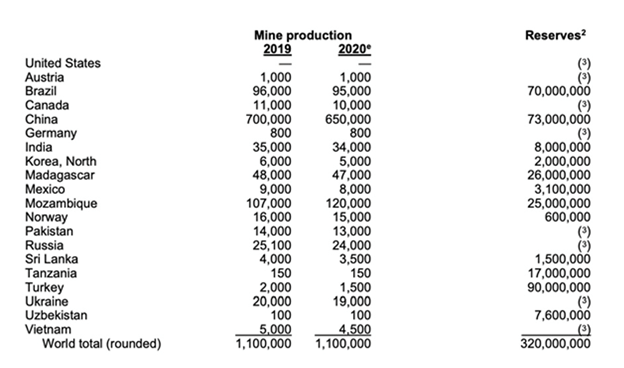 The USGS believes that large-scale fuel cell applications are being developed that could consume as much graphite as all other uses combined. Tesla’s Nevada gigafactory alone consumes around 35,000 tons of spherical graphite per year. We have clearly come to the point when much more graphite needs to be discovered and mined.

Global graphite consumption has been increasing steadily every year since 2013, although in 2019 there was a reduction of 14%. Roskill expects total graphite demand over the next 10 years to grow around 5 to 6% per year.

A White House report on critical supply chains showed that graphite demand for clean energy applications will require 25 times more graphite by 2040 than was produced worldwide in 2020.

Remember there is no substitute for graphite in an EV battery and lithium-ion batteries are expected to be the technology that runs electric vehicles for the foreseeable future, making graphite indispensable to the global shift towards clean energy.

Currently there are no producing graphite mines in the United States, and only 10,000 tonnes a year is being mined from two facilities in Canada. The fact is, for the United States to develop a “mine to battery” supply chain at home, it currently has no choice but to import its raw materials from foreign countries.

For battery-grade graphite, that means China, which is growing increasingly adversarial, in terms of trade, foreign policy and militarily.

For many years the United States didn’t mind being dependent on out-of-country suppliers for critical mineral like lithium and graphite. Mining can be messy and the political will just wasn’t there. This is changing, thanks to politicians like Alaska Senator Lisa Murkowski, who is trying to reverse this dependency. They like the idea of developing domestic critical metal mines and are working with the mining industry to achieve results.

Murkowski helped draft the bipartisan infrastructure bill currently making its way through the House of Representatives. The $1.2 trillion proposal includes money for research and demonstration projects and other efforts aimed at lessening the reliance on China for the supply of critical minerals like lithium and graphite.

Another provision calls for streamlining the permitting process for mining and extracting critical minerals. It can take 12 years now to line up the federal permits needed to open a mine, making businesses hesitant to deploy investment capital.

Please visit aheadoftheherd.com for this part of the report.

AOTH/Richard Mills has based this document on information obtained from sources he believes to be reliable, but which has not been independently verified.

AOTH/Richard Mills makes no guarantee, representation or warranty and accepts no responsibility or liability as to its accuracy or completeness.

Expressions of opinion are those of AOTH/Richard Mills only and are subject to change without notice.

AOTH/Richard Mills assumes no warranty, liability or guarantee for the current relevance, correctness or completeness of any information provided within this Report and will not be held liable for the consequence of reliance upon any opinion or statement contained herein or any omission.

Furthermore, AOTH/Richard Mills assumes no liability for any direct or indirect loss or damage for lost profit, which you may incur as a result of the use and existence of the information provided within this AOTH/Richard Mills Report.

Our publications are not a recommendation to buy or sell a security – no information posted on this site is to be considered investment advice or a recommendation to do anything involving finance or money aside from performing your own due diligence and consulting with your personal registered broker/financial advisor.

AOTH/Richard Mills recommends that before investing in any securities, you consult with a professional financial planner or advisor, and that you should conduct a complete and independent investigation before investing in any security after prudent consideration of all pertinent risks.  Ahead of the Herd is not a registered broker, dealer, analyst, or advisor. We hold no investment licenses and may not sell, offer to sell, or offer to buy any security.

Richard owns shares of Graphite One Inc. (TSXV:GPH). GPH is a paid advertiser on his site aheadoftheherd.com