Since our initial report on Hycroft Mining (A Nevada focused gold and silver producer, with very substantial upside if it can execute on the multi-year phase expansion at its Hycroft mine), the company has taken some significant steps installing a capable management team, raising financing for the next 12-24 months and coming closer toward completing Phase I (leach pad expansion).

On September 29th, Hycroft announced its intention to raise capital via equity financing, offering (selling) 7.22m units (each unit consisting of one share of common stock and one full warrant). A few days later, on October 2nd, 2020, Hycroft announced it was upsizing the offering to 8.33m units at $9.00/share and a warrant with a $10.50/ strike price. Each warrant entitles the holder to purchase one share of common stock at the aforementioned price for a period of 5yrs from the closing date. On October 6th, 2020, Hycroft Mining announced closing the upsized $86m public offering, including full exercise of the over-allotment option. The total offering (inclusive of the over-allotment) totaled 9.583m units. Hycroft raised gross proceeds (after expenses) of $83.1m.

Should Hycroft execute on its multi-year expansion at Hycroft, this will, in the not too distant future, will be an excellent asset of scale as it will begin exploiting one of the world’s largest resources: 2P reserves of 18m AuEq oz. and total resources of 31m AuEq oz. (ranks among the top 25 in the world and 2nd in the U.S.). What makes this more interesting is that approx. 40% of AuEq reserve and resource is from silver.

Q3 was more or less in line with previous quarters (production-wise), which should continue to be the case until the completion of Phase I of the new Hycroft Leach pad (end Q1 2021). Construction continued during the quarter; however, due to engineering and design changes and delays in delivery of electrical components and pumping infrastructure, construction and commissioning completion are now expected before the end of Q1 2021. Once completed, production and, in turn, cash flow will increase, which, combined with the recent financing, will allow the company to advance the expansion over the next 12-18+ months (dependent on when/if the $11.50/strike warrants are exercised early per the acceleration clause, gold and silver prices (on-going cash flow generation), and the timing of additional expansionary capital. We will update our NAV calculation once we see the impact on financial performance following the Phase I leach pad expansion. The NAVPS could be lower than our initial report following the recent financing; unless gold and silver prices increase to a certain level. The 2025 Hycroft warrants (HYMCW) remain an excellent speculative instrument. 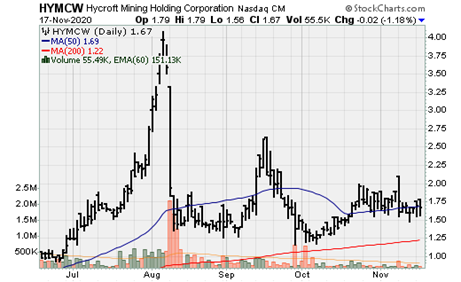