The Inflation Tax Is Bearing Down on Investors Too

The post-COVID inflation surge that was supposed to be “transitory” is looking a lot more permanent.

Those numbers reflect the biggest increase in 30 years. 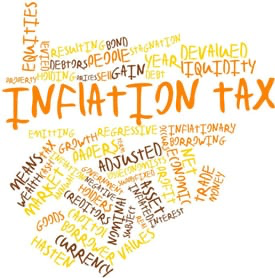 Even when excluding food and energy, the PCE index jumped 3.6% from one year ago – well above the Fed’s own long-term 2% objective.

Fed chairman Jerome Powell has stated he is willing to tolerate above-target inflation for an indefinite period to make up for previous periods of below-target price rises. But recent inflation pressures have clearly been stronger than he had anticipated (or had been willing to admit).

In comments last week, Powell blamed persistently higher prices on factors other than loose monetary policy: “It’s also frustrating to see the bottlenecks and supply chain problems not getting better – in fact at the margins apparently getting a little bit worse,” he said.

“We see that continuing into next year probably and holding up inflation longer than we had thought.”

Powell seems to have little concern about record government spending. He certainly has no qualms about buying up Treasury bonds by the trillions to help enable it.

Yet this process of effectively monetizing government debt with newly created currency is the primary driver of price inflation.

It’s not just Republicans who are growing concerned. Democrat Senator Joe Manchin is holding up President Joe Biden’s $3.5 trillion spending bill because he fears it would exact a heavy “inflation tax” on American families.

“What I have made clear to the President and Democratic leaders is that spending trillions more on new and expanded government programs, when we can’t even pay for the essential social programs, like Social Security and Medicare, is the definition of fiscal insanity,” Manchin said.

“Suggesting that spending trillions more will not have an impact on inflation ignores the everyday reality that America’s families continue pay an unavoidable inflation tax.”

The inflation tax tends to hit retirees and others on fixed incomes the hardest, along with those who are living paycheck to paycheck.

Investors who hold large portfolios of financial assets are at great risk as well. Bonds and most other income-producing instruments aren’t paying enough to keep pace with inflation. And stocks are vulnerable to being repriced to reflect the inflation tax drain on corporate earnings.

Precious metals are among the most solid, time-tested inflation hedges. Despite their recent price weakness, history shows they can move rapidly to the upside during times when stocks, bonds, and other financial assets succumb to inflation.

That’s exactly what happened in the late 1970s, with gold and silver embarking on epic bull markets. The economic, political, and monetary pressures in place today may be leading up to a repeat.