17 hours 39 minutes ago
The Short Position in SLV
23 hours 46 minutes ago
Here Is Why Silver Demand Will Climb to a New Record High! - Keith Neumeyer
4 days 1 hour ago
This Is Why NOW Is the Perfect Time to Buy Silver - Garrett Goggin
4 days 1 hour ago
Rico Charges Dropped On Silver Manipulation Trial
4 days 22 hours ago
Has Inflation Been Defeated?

The steady increase in interest rates coupled with references to inflation has some people scratching their heads. Not surprising. The two don’t necessarily go together. For now, let’s see if we can add some perspective to interest rates.

“Dad, I am in a national sales meeting. We are discussing inflation. What were mortgage rates in 1981?”

I responded with a message that average annual mortgage rates in 1981 peaked at 16.63%.

That might be something to keep in mind when you read a headline that refers to the recent horrific increase in mortgage rates.

That is a huge percentage increase, but is it unreasonable? Depending on the context in which it is viewed, maybe not.

Over the same six month period that has seen mortgage rates double, the interest rate on the US Treasury 20YR bond has risen from 2% to a recent 3.45%, an increase of seventy-two percent. The corresponding decline (twenty-eight percent) in the underlying bond price is pictured in the chart (TLT ETF) below…

Below is the same chart over the past three years… 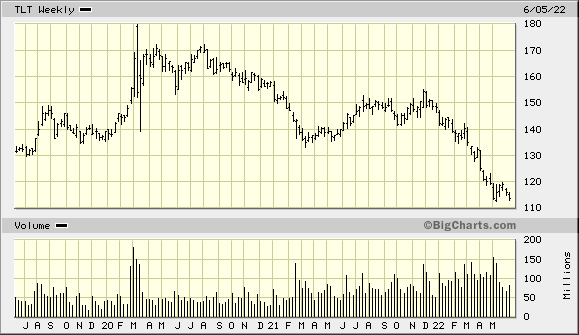 The decline in bond prices (and rise in interest rates) has been in force since early 2020.  From a low of just over 1% in the summer of 2020, the interest rate on the US Treasury 20YR bond has more than tripled (1.06% to 3.45%) and the underlying bond price has declined by thirty-eight percent.

As in the case of mortgage rates, the increase in long-term interest rates has been swift and significant. Yet, as we saw with mortgage rates above, some additional perspective can help.

Between 1971 and 1980, interest rates climbed to mind-numbing levels.  The benchmark 10-year US Treasury Bond yield increased to a high in excess of 15%.

With long-term treasury bond rates at historic highs and mortgage rates at 16%, how does that compare to where we are now? Are today’s high rates so horrific?

Of course the systematic risk is there, but it has been all along. Percentage-wise, a rise in interest rates from 1% to 3% isn’t any different than a rise from 5% to 15%. It is a matter of perspective.

And since the financial system and world economy are dependent on cheap credit, the ultimate cataclysmic event could come at any time.

The historic (centuries old) average annual (all-inclusive) interest rate through the end of the twentieth century was approximately 8%.

Interest rates have risen sharply of late. But they are only a fraction as high as interest rates forty years ago.

The world economy’s dependence on cheap credit has reached addictive proportion. The increase in interest rates heightens the systematic risk.

Nevertheless, the potential for much higher interest rates is great. At a minimum, interest rates would have to more than double from their current levels just to get close to long-term historic averages.