Alasdair MacLeod, the Head of Research at Goldmoney, wonders if we may soon see “the end of paper gold and silver markets.”

The Bank of International Settlements (BIS) developed Basel III regulations, purportedly to prevent another 2008-style financial crisis. The roll out of these new measures began years ago. 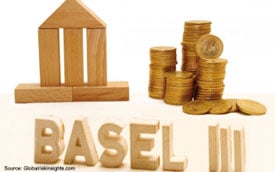 Unless they secure a requested extension, European banks will have to comply with Net Stable Funding Requirements by the end of June. Along with other effects, these regulations could make trading in the gold and silver derivatives markets less profitable to them.

These paper markets operate like rigged casinos, with bankers as the organized crime syndicates in charge. In fact, the Department of Justice recently prosecuted JP Morgan Chase using the same RICO laws developed to prosecute the mafia.

The end of the paper gold and silver markets would be a very good thing for honest price discovery and for the cause of sound money.

We hope McLeod is right about the effect of the regulation. He certainly makes a good case.

However, the last thing anyone should expect is for the BIS and other regulators to be part of any honest effort at reform. They work for the bad guys. What then is really going on with these new rules?

MacLeod isn’t certain about what the BIS is up to, given the apparent dire consequences for gold and silver derivatives trading. Like many of us, he doubts the BIS can be counted on to do the right thing.

Maybe the policy wonks there made a mistake. They wrote a regulation years ago and didn’t understand what the true effect would be.

Perhaps killing the paper markets is part of a plan to reset commodity prices much higher. Massive price inflation and currency devaluation has always been, in our view, the most likely method for dealing with otherwise unpayable mountains of debt.

Another interesting theory suggests that derivatives trading simply won’t be needed to manage the gold and silver markets anymore.

Central Bank Digital Currencies are on the way. Bankers and politicians are busily planning a monetary system which offers total oversight and control for them and zero privacy or control for the rest of us.

If they get their way, physical cash will go by the wayside and 100% of transactions will be recorded on a blockchain operated and monitored by the Federal Reserve.

The central bank and federal agencies, including the IRS, will no longer have to rely on private banks and credit unions to provide transaction records. That information will reside at their fingertips, stored on government servers.

Authorities will be thrilled to hold vast new powers. They could add, or remove, funds from peoples’ digital wallets at will. Payments to unapproved merchants and individuals could be prohibited.

Some even more novel ideas have already been floated. An expiration date could be applied to stimulus funds, thereby forcing citizens to spend. Money may also be restricted for use only within certain geographic boundaries.

This amount of power and control is irresistible to the sociopaths at the top of world power structures. We can be sure they intend to reach for it.

Central banks around the world are well down the road toward development of digital currencies, so the timing of the current inflationary surge, as well as the Basel III regulatory change, is a little suspicious.

Former Chicago mayor and Obama administration operative Rahm Emanuel, an apparent student of Rules for Radicals author Saul Alinsky, famously said, “You never want a serious crisis to go to waste. And what I mean by that is an opportunity to do things that you think you could not do before.”

If Basel III regulations do signal the end of the current price discovery scheme in metals, no goldbug will miss it. It will be fun to watch what that might do for gold and silver prices.

Just be aware there is a much bigger game also afoot.