14 hours 16 minutes ago
COT Silver Report - August 12, 2022
1 day 22 hours ago
Was $18 Silver the Bottom? Next Pivot? - Lawrence Lepard
3 days 2 hours ago
Silver Coin Premiums – Another Collapse?
4 days ago
The End Game for Silver Shenanigans...
5 days ago
The Fed Is All Talk, and JPMorgan Trial EXPLAINED - Chris Marcus

The Next Key Level for Gold

Gold rallied last week toward the top of a down-trending channel that has been in force since prices peaked last summer. 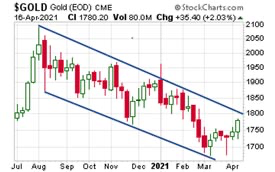 A breakout attempt in early January failed. The gold market subsequently slumped to a potential double-bottom low in March around $1,675/oz.

The $1,800 level now looms as a critical technical juncture.

The recent bounce could either fail around there… or gather the strength to finally break out of the multi-month corrective phase.

A strong push above $1,800 (confirmed by a weekly close) would carry hugely bullish implications for the remainder of the spring. New all-time highs could soon be in sight.

Bearish traders, though, will be eyeing lower levels if resistance kicks in and triggers a sell-off.

Either scenario could play out in the near term. However, the bullish scenario does have a few things going for it.

For one, the gold market appears overdue for a period of seasonal strength after suffering an unusually bad first quarter.

Gold prices may also be due to play catch-up to palladium, copper, and other outperforming metals.

What’s bullish for gold is typically super-bullish for silver. Silver bulls are watching for a move above $27.00/oz to establish a breakout above the March high.

Is a Silver Raid Coming?

Some internet chatter is pointing to April 20th as a day for a “silver raid” – massive physical buying of bullion that depletes available inventories and pressures large institutional short sellers to capitulate.

It is difficult to gauge what impact, if any, this campaign will have on bullion availability or actual spot prices. The paper market for silver typically doesn’t react, at least not immediately, to developments in the bullion market.

That said, some internet-sourced campaigns have proven quite impactful on markets this year.

For example, The WallStreetBets community directly fueled a spike in Gamestop and other targeted stocks. And the once obscure joke of a cryptocurrency called Dogecoin got “memed” back into relevance – to the tune of over $40 billion in market value.

What Dogecoin is actually going to be used for other than to be traded back into other crypto or fiat currencies, nobody seems to know (or care). But Elon Musk is fond of it, and there’s no particular reason why Dogecoin can’t become as valuable as Bitcoin.

That value, down the road, could be multiples of today’s market prices… or a tiny fraction of them.

There’s no particular reason to expect any cryptocurrency to retain a certain value given that another digital coin could always come along to steal its momentum. Or the entire space could fall from grace and become functionally obsolete like so many other captivating technology innovations from the past.

The upshot is that if digital tokens backed by nothing and shares of companies with dismal business outlooks can surge for no fundamental reasons other than internet chatter, the same sort of boost could accrue to assets that do have actual fundamentals behind them.

It wouldn’t take much, relative to the size of crypto and equity markets, to move silver a lot.

A super-spike in silver prices as a result of a “raid” or “squeeze” isn’t necessarily something investors should expect. But crazier things have happened in other assets that have gone viral on the internet – and silver has the benefit of being useful and scarce in the real world.