“Post-bubble contraction” (PBC) as coined by Bob Hoye, may finally be at hand

Bob Hoye has been talking about a coming post-bubble contraction (PBC) for many years, in my experience. Now after many false starts, it may finally be in play on the wider macro picture. Past contractions (e.g. 2008 and 2020) have proven to be little more than precursors, triggers to new asset bubble phases because the Fed’s main macro manipulation tool, bonds, were in a multi-decade long trend of disinflationary signaling.

To this point with respect to the PBC, timing has been an issue. This is not a critique of Hoye, a fine financial historian and macro fundamental analyst. In fact, it is the opposite. It is from him that I learned the proper fundamentals for gold and especially the gold mining industry. But perfectly good deflationary meltdowns (of previous inflationary operations) were foiled in both 2008 and 2020.

Why were they foiled so effectively? Because the Federal Reserve and global central banks have for decades had a lenient bond market to fall back on (the fabled ‘bond vigilantes of yore apparently rode into a small town, hit the saloon and never again emerged… until 2022, that is). I have for many years now used the 30-year yield ‘Continuum’ (monthly 30yr yield chart, below) as a nice visual to the mechanics of the Fed’s macro-manipulative wheel house, the US Treasury bond market.

My theory has been that since the 2016 election the Fed has firmed its resolve to extricate itself from a dangerous situation; caught with its pants down as Trump/Republican fiscal (i.e. politically instigated) stimulus was going to be laid on top of already extreme monetary stimulus [as perma-promoted by the Bernanke Fed through 7 long, saver killing years of ZIRP].

Q4, 2018 was a time when a tweeting president was routinely berating Fed chairman Powell for rate cuts because said Fed head would not back off his hawkish stance even though stock markets were cratering. We knew that the Fed would not willingly allow the Continuum, by which it was given license to inflate over the previous post-Volcker decades, to break out. Thus we knew that Trump’s harangues were falling on deaf ears.

I continue to maintain that an impulsive breakout in yields would have blown the Fed’s racket. How do you maintain an orderly system of inflationary operation – that has endured through many decades – if bonds are burning and inflationary asset bubbles (most notably in stocks on the post-2008 bubble engineered by Bernanke-era monetary policy) are raging? The answer may well be, you don’t.

Dialing ahead to 2019, our most recent journey along the Continuum has resulted in a spike that just today [Thursday] hit our upside target of 4%. It was a simple (inverted H&S) pattern measurement to a logical resistance zone. 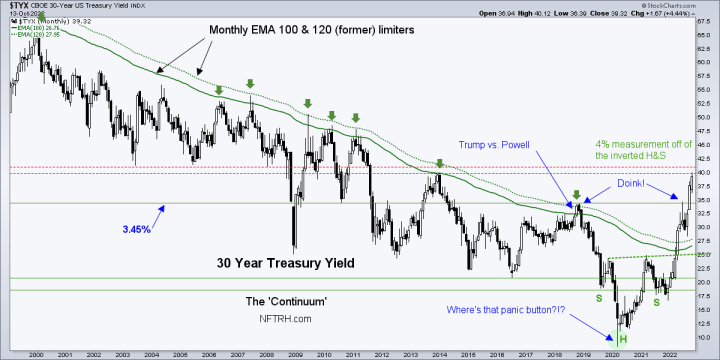 How We Got Here

The progression toward today’s [Thursday’s] potentially max inflation hysteria (by the public, forward inflation indicators topped quite a while ago) point went something like this…

That brings us back full circle to the opening concept of the article; that this time the PBC squirrel may indeed find his bubble ending nut.

This story is being told by the chronically strong US dollar, main receiver of frightened liquidity on the run. The story is also being told by its fellow Horseman of (macro) Apocalypse, the Gold/Silver ratio which is, in Hoye’s words “a metallic credit spread”. When gold rises relative to silver, it is a signal toward anti-liquidity for the markets, especially inflation-sensitive markets (silver having more cyclical, industrial and inflation sensitive utility than gold). 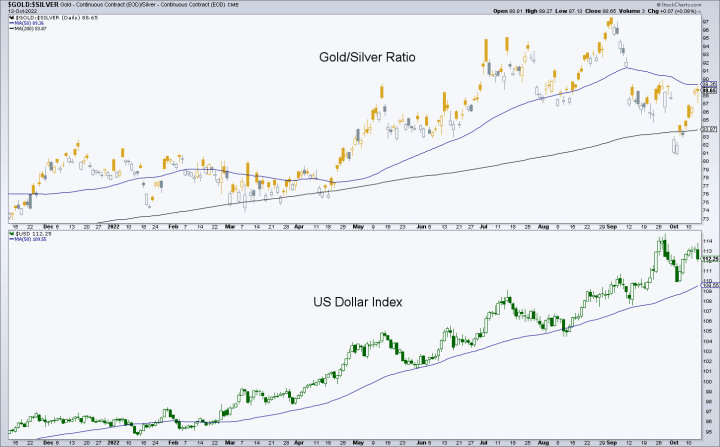 The Continuum & a PBC

The bottom line is that if/when this inflationary phase falters as expected there is going to have to be a lot (and I am talking about something way beyond the routine bear market that is in play now) anti-asset price pain before that vampire gets invited back into this particular house (of cards, actually).

I have long viewed the 30yr yield above as the most elegant indicator I have. It was so beautiful in its unbroken structure and ‘like clockwork’ accuracy at forecasting macro turning points (along an inflation>deflation>inflation>deflation, etc. continuum with a bias to disinflationary signaling).

But now that important tool used by the Fed is broken. It broke in April with that big spike candle that pierced through the limiters (now green) and importantly, held the limiters on a subsequent test a few months later.

If you believe as I do that the implied disinflationary backbone known as the Continuum above was instrumental in the Fed’s power to manipulate the bond market in service to its inflationary operations, then maybe like me you might wonder how on earth is the Fed going to save the world again during the next meltdown? Or will it simply be runaway inflation forever? von Mises, anyone? Beuller?

There is only one clear answer for the years upcoming; this ain’t Grandpa’s or even Dad’s bond market. People have for decades claimed that the Fed is in a box, yet there they always were, inflating away as needed. But one firm statement I can make now is that the assumptions and metrics traditionally used by conventional market analysts (and tragically for the public, financial advisers) are obsolete for what is ahead.

For decades the sustaining constant has been periodic deflationary/disinflationary episodes routinely met by a dovish Fed. Today the Fed is forced by its own excess to try to recapture something that has gotten out of its bottle. But the spike above the green moving averages look like a broken lid and the Genie is not going to willingly go back in.

If this is finally THE post-bubble contraction the Fed is going to have to invent some new form of manipulation or else it’s going to be a long (and long overdue) economic and financial market contraction that the Fed has been warding off with extremely loose policy for decades. Said PBC would have to clear of its own mechanics. But boy there is a lot of clearing to do after decades of excess.