1 day 7 hours ago
This Is Why NOW Is the Perfect Time to Buy Silver - Garrett Goggin
1 day 7 hours ago
Rico Charges Dropped On Silver Manipulation Trial
2 days 4 hours ago
Has Inflation Been Defeated?
3 days 18 hours ago
COT Silver Report - August 12, 2022
5 days 2 hours ago
Was $18 Silver the Bottom? Next Pivot? - Lawrence Lepard

The Race for Copper, the Metal of the Future 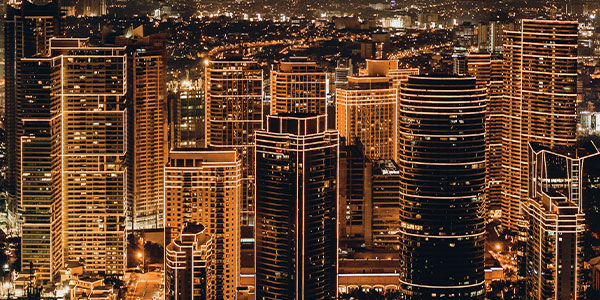 The International Energy Agency (IEA) was founded in 1974 in response to oil embargos the previous year that caused the global price of oil to surge 300% from $3 per barrel to $12 per barrel. From the start, the IEA’s mission has been to help member nations deal with major oil supply disruptions.

Over the years, the group’s purview has broadened to include more than just oil security, and in its most recent report, the IEA sounds the warning bell on the global supply of key minerals—particularly copper.

Many of these minerals are produced by a very small number of companies in a small number of jurisdictions. Take rare earth metals, used in everything from semiconductors to smartphone batteries. China controls between 80% and 95% of the world market, depending on the mineral.

Or look at copper. Chile and Peru are responsible for a combined 40% of global output. The largest copper mine in the world, Chile’s Escondida, is believed to have reached peak production. Meanwhile, the Chilean government has threatened to shut down the mine—57.5% of which is owned by BHP—for its water usage. Oh, and did I mention there’s a strike at Escondida?

These are only near-term risks to global supply. Looking more long-term, the risks increase and could be more severe.

Like gold, fewer and fewer large copper deposits are being discovered, and the time between discovery and production has lengthened over the years as costs rise. S&P Global Kevin Murphy called last decade “dismal” in terms of new discoveries. Of the 224 copper deposits that were discovered between 1990 and 2019, only 16 were found in the past 10 years. Although the earth’s surface still has an abundance of the red metal, most new deposits are of low grade. 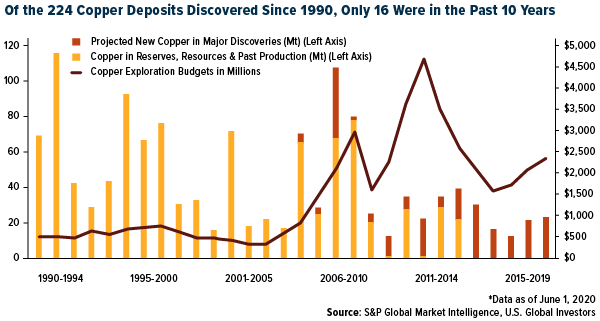 This could be a problem going forward. As I’ve written about before, the adoption of electric vehicles (EVs) and battery storage technology—both of which rely heavily on copper—is set to accelerate rapidly over the coming decades. Last year, EV sales were around 3 million. By 2040, they could be as high as 70 million. 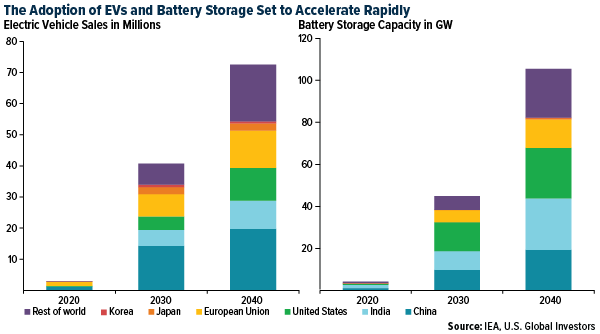 According to the IEA, copper will remain the most widely used metal in renewable energy technologies. Compared to aluminum, nickel and zinc, its importance is rated high for most new energy-related projects. That’s mainly because its electrical conductivity is the second best after silver and 60% higher than aluminum. Goldman Sachs predicts that by 2030, copper demand will grow nearly 600% to 5.4 million tons.

Although large copper discoveries are becoming fewer and farther between, there are notable exceptions. The IEA mentions Peru’s Quellaveco, majority-owned by Anglo American, and Ivanhoe’s Kamoa-Kakula in the Democratic Republic of the Congo (DRC).

“Discovering and delivering a copper province of this scale, grade and outstanding ESG credentials, ahead of schedule and on budget, is a unicorn in the copper mining business,” commented Ivanhoe founder and co-chair Robert Friedland, who added that Kakula was discovered only five years ago. This represents “remarkable progress by the mining industry’s glacial standards from first drill hole to a new major mining operation.”

Kakula, Robert says, is now on path to become the world’s second largest copper mining complex and perhaps even the largest. Further, the project is estimated to be the world’s highest grade major copper mine. Further still, Ivanhoe pledges that Kakula will be a net-zero greenhouse gas generator, making the company an attractive ESG play.

Last week, analysts at CIBC announced that they adjusted their end-of-year copper price forecast to $5.25 a pound, Kitco reports. The estimates are now 22% and 32% above 2021 and 2022 consensus estimates.

If true, this should be supportive of copper miners such as Ivanhoe going forward.

All opinions expressed and data provided are subject to change without notice. Some of these opinions may not be appropriate to every investor. By clicking the link(s) above, you will be directed to a third-party website(s). U.S. Global Investors does not endorse all information supplied by this/these website(s) and is not responsible for its/their content. Beta is a measure of the volatility, or systematic risk, of a security or portfolio in comparison to the market as a whole.

Holdings may change daily. Holdings are reported as of the most recent quarter-end. The following securities mentioned in the article were held by one or more accounts managed by U.S. Global Investors as of (03/31/2021): BHP Group Ltd., Anglo American Plc, Ivanhoe Mines Ltd.