A Recession Is NOT “Good For Gold”

Financial writers and gold bulls have both taken their turn at referring to a potential recession as having a positive impact on gold prices. The commentary varies somewhat, but here are a few examples…

“the price of gold would ‘benefit’ from a recession”; “the risk of recession will drive investors into gold”; “a confirmed recession is all gold needs to move higher.”

The statements above and others like them, stem from the assumption that bad economic news is good for gold. Further (they incorrectly assume), the worse the economy is, the higher the gold price.

Gold is a financial asset. Its price is not determined by economic events or activity.

Below is a chart of gold prices for the past century. The prices are adjusted for inflation… 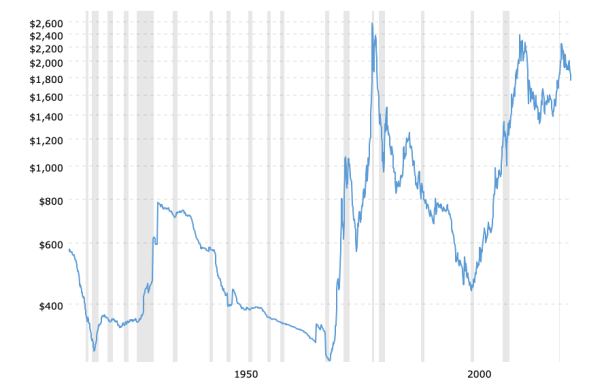 During the period 1934-70, the United States and the rest of the world experienced a horrible depression, a horrific world war, and a period of new and positive economic growth.

For thirty-six years the inflation-adjusted price of gold declined steadily. This seems to contradict those who insist that things like a weak economy and geopolitical unrest are good for gold.

Then, between 1980 and 2000, the US and world economy experienced probably the most significant and lasting period of unusually strong economic growth in history. Technological advancement and business expansion powered a growth juggernaut.

Inflation, or more correctly, the effects of inflation, were little noticed. The inflation-adjusted price of gold declined by more than two-thirds. The nominal gold price declined similarly, as much as seventy percent from its intraday peak to its low point two decades later.

GOLD PRICE DURING PAST RECESSIONS

The shaded gray areas on the chart above indicate periods of time which have been classified officially as recessions. There is no apparent correlation between the gold price and the events called recessions.

Also, the recessions occurred independent of whatever major trend in the gold price was in effect at the time.

This can be seen on the chart below as well, which shows the same gold price history without adjustments for inflation… 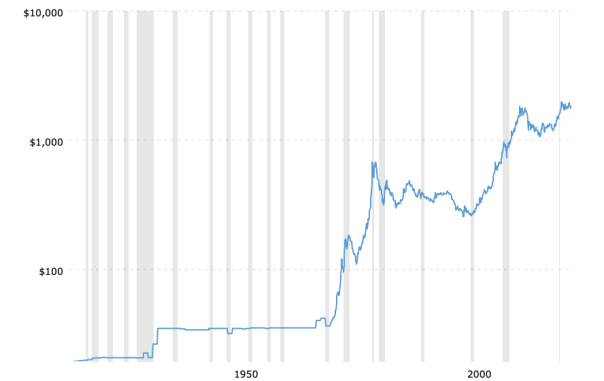 The price of gold is not affected or determined by economic events, such as recessions, depressions, etc. Nor, is the gold price subject to considerations involving wars, political instability, interest rates (see Gold And Interest Rates – No Correlation), etc.