Recession Over and Gold Falls Lower

Given so much going on within the monetary/financial chaos out there, (and it being -- save for one trading day -- our graphically-rich, month-end edition of The Gold Update), 'tis efficiently sufficient to lead with another installment of "Facts, Hercule, Facts!"

■ "Fact!": The StateSide recession which never happened -- even though it REALLY did -- is over.
--->Moreover: the positive REAL Q3 annualized +2.6% Gross Domestic Product growth was herein foreseen way back on 06 August just after President Biden stated with respect to July's Payrolls data: "That’s the fastest job growth in history today" (even though since 1998 'twas actually 26th-best on a percentage improvement basis and 40th-best nominally). Regardless, we then penned: "...if this robust jobs report is any indication, the 'minus sign' shan't reappear in front of the Q3 number. Within seconds of the release, the 'recession' shall thus formally be declared as over -- perhaps even redefined as having never existed..." And that is precisely what happened this past Thursday. (So don't forget to vote a week Tuesday).

■ "Fact!": Thus logically Gold is lower, trading participation growing ever slower as the economy booms.
--->Moreover: in settling out the week yesterday (Friday) at 1648, 'twas not only Gold's lowest weekly close year-to-date, but indeed the lowest weekly close since that ending pre-COVID on 21 February 2020. And as we've regularly pointed out of late, Gold's average monthly contract volume is the weakest in three years, including that for this October with but one trading day to run. The greater the Gold hype, the more subdued its participation. Again, nobody cares.

■ "Fact!": As to the stock market, the robustly positive S&P continues to tease us, but its relatively negative MoneyFlow stands to squeeze us.
--->Moreover: should the website's S&P MoneyFlow page run its typical leading way, the low for this year (3492) is not yet in place, we're prone to say. Oh to be sure, the S&P closed out this past week with its 12th-best daily gain thus far this year, indeed the sixth-best weekly gain. But riding on a "live" riskfull price/earnings ratio of 34.9x (1.724% yield) in a riskless 4% U.S. Treasuries environment is not appealing one wit.

Now then, what is the inescapable conclusion?

Yer watching the wrong film there, Squire. That's fiction. This is reality. Two consecutively negative GDP quarters (Q1 and Q2) as foretold by the Economic Barometer "officially" put the into recession. Q3's positive turnaround (again foretold weeks in advance by the Econ Baro) ended the recession. Here's the picture: 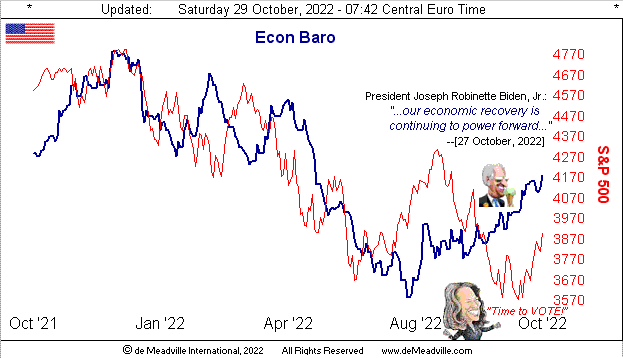 'Course, 'tis not all jolly out there, especially on the housing front as mortgages continue to gouge. New Home Sales in September slowed, and worse, the month's Pending Home Sales fell -10.2%, its third weakest month-over-month swing from a year ago. Too, October's Conference Board's reading on Consumer Confidence backed off. And as for the turnaround to positive GDP, a factor of 0.61 was strictly due to inflation-affected data versus just 0.39 REAL growth. (But let's not mitigate the mirth out there).

Getting to Gold, here we've its Weekly Bars and parabolic trends, the current one of course continuing its Short course. Entering an eighth week in duration, the hurdle to flip said trend to Long is +111 points above the present 1648 price at 1759. Given Gold's "expected weekly trading range" is now 56 points, price shan't get there this next week -- but if it did, 'twould be indicative of Gold finally gaining some bona fide interest. (Now living in our eighth calendar decade makes us wonder if we'll ever see such enthusiastic ownership interest; after all by the opening Gold Scoreboard, value today is 3899 vs. actual price at a lowly 1648). But year-over-year, the hard truth is here, with this gentle reminder: should the present parabolic Short trend run the typical course, the high 1500s can soon be in force: 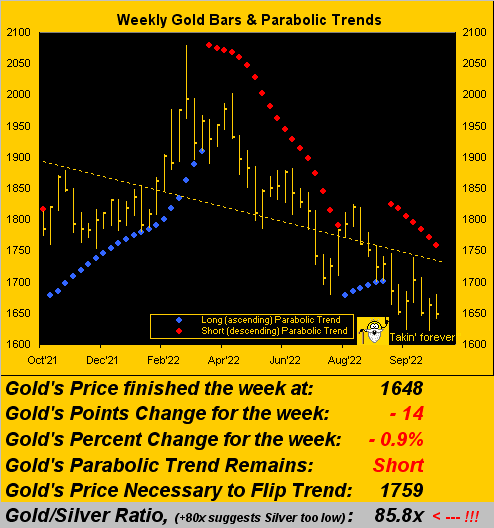 It being month-end (but for Monday), here too from one year-to-date are the percentage tracks of Gold itself (-8%) along with these key equities brethren: Franco-Nevada (FNV) -14%, Agnico Eagle Mines (AEM) -18%, Newmont (NEM) -22%, the VanEck Vectors Gold Miners exchange-traded fund (GDX) -24%, the Global X Silver Miners exchange-traded fund (SIL) -37%, and Pan American Silver (PAAS) -38%. And whilst the equities seem to be now catching a bit of a bid, more broadly the look remains (again) "brutal": 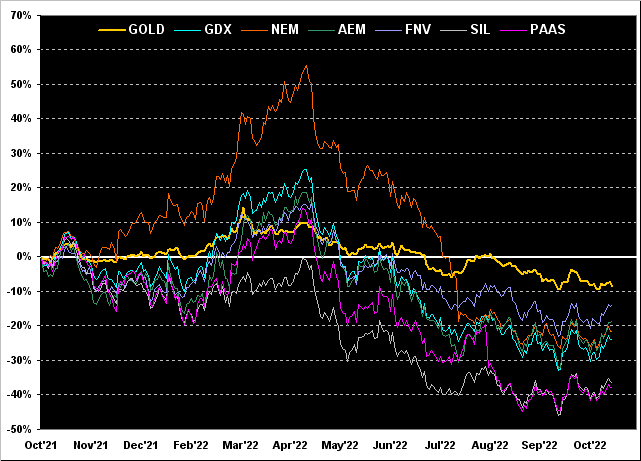 Within the BEGOS Markets at large, we find Gold just off the podium -10.0% year-to-date, but poor ol' Sister Silver -17.8%. And to which we earlier alluded, the Bond may be in the basement (but you get full price in return plus interest, barring U.S. Secretary of the Treasury Janet "Old Yeller" Yellen running out of dough), whereas the S&P despite its pop is on balance languishing (and you've no clue what you'll get in return): 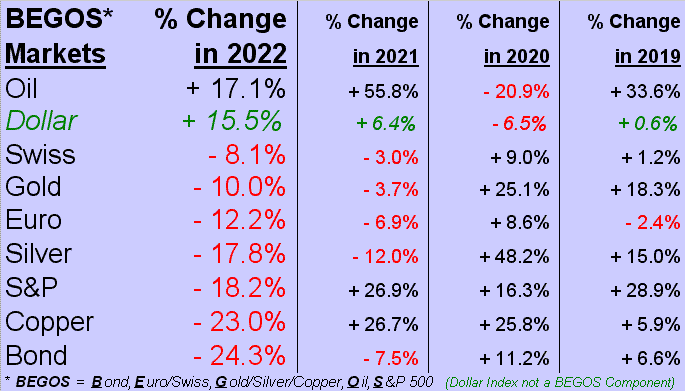 "And yet stocks are all the rage again, mmb..."

True for the moment, Squire. The S&P 500 today stands at 3901. Again we reprise that which we wrote way back on 21 May, our being "...in anticipation of [the S&P] dropping lower still to the top of the 3600-3200 support zone..." In the ensuing months, other analytical entities also piled onto the 3600 notion, and come late September, voilà 3600. Since then, the S&P has been bouncing about that 3600 level (trading as noted no lower than 3492), such as to finally see Bloomy declare on 17 October that "S&P 500 Bounces Off Make-Or-Break Technical Level", (that being 3600). And since that day, the lemmings have herded pell-mell back into stocks. As one analyst noted [paraphrased], "They're preparing for the year-end rally!" Add in the Econ Baro being clearly on the rise, and just like that, we've yet again returned to the era of "We don't need no stinkin' earnings!" 'Course in recent years, neither were there no stinkin' interest rates either. In fact, 'twas nearly nine years ago (when there were interest rates) in our 07 December 2013 missive that we put forth the eventual rationale for a "Look Ma, No Earnings!" crash. That occasionally-quipped notion still stands.

And yet earnings still apparently have some meaning, one technology stock after another getting rather hoovered this past week. Take for example Amazon (AMZN): it's year-over-year earnings fell -95.4% from $6.12 to barely 28¢, the shares in turn taking a deserved beating. "Deserved" indeed as the day prior to the earnings report, the stock had settled with a 101.1x P/E ratio. Who holds risk like this? (The Investing Age of Stoopid continues...)

Be that as it may, as we next go 'round the horn for all eight BEGOS Markets across the last 21 trading days (one month), that with the steepest up-sloping linear regression trendline is the S&P 500 (at lower left). Further, the rising baby blue dots of trend consistency for the S&P suggest reinforcing of the trend; nonetheless we sense quite soon 'twill come to its end. Indeed with last week's reference to Leonardo Bigollo Pisano Fibonacci, if measuring the S&P from its 12 September high to the 13 October low, ol' Fib just completed his Golden Ratio retracement yesterday upon crossing 3879; now let's see if Galileo Galilei's gravity kicks in: 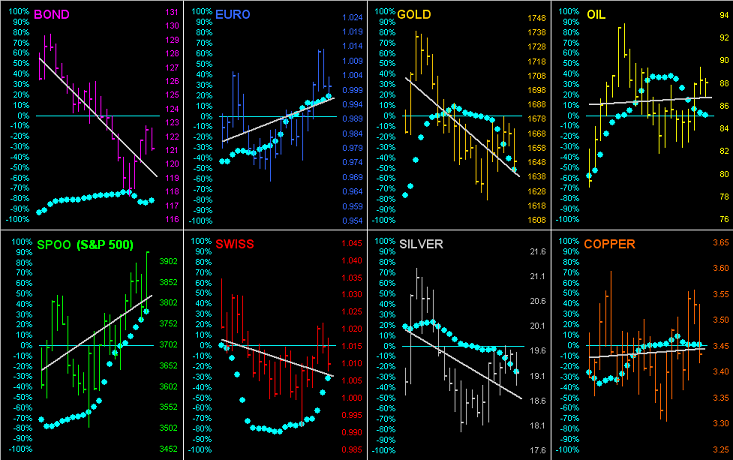 As for pricing by volume for the precious metals, we now turn to the 10-day Market Profiles for Gold on the left and for Silver on the right. In both cases for the present, price appears rather hemmed in: 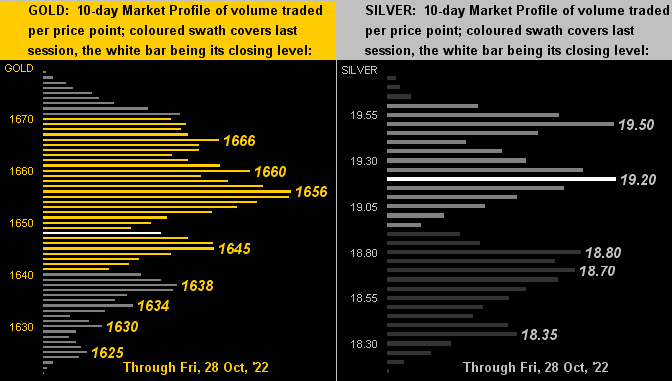 Finally, it being essentially month-end, we go to Gold's Structure and defined strata therein. Quite the "Swing and a miss!" there for our 2254 forecast, eh? 'Course the worst of it is, (barring your exquisite timing as an investor or trader), Gold hasn't made any progress in 10 years. And yet 10 years ago today, Gold's currency debasement benchmark -- the U.S. Money Supply (M2 basis) -- was at $10.2 trillion, less than half today's $21.4 trillion. Roll the tape yet again, Squire: (3,2,1): "'Tis DIABOLICAL!" An understatement at that as Gold appears headed to "The Floor": 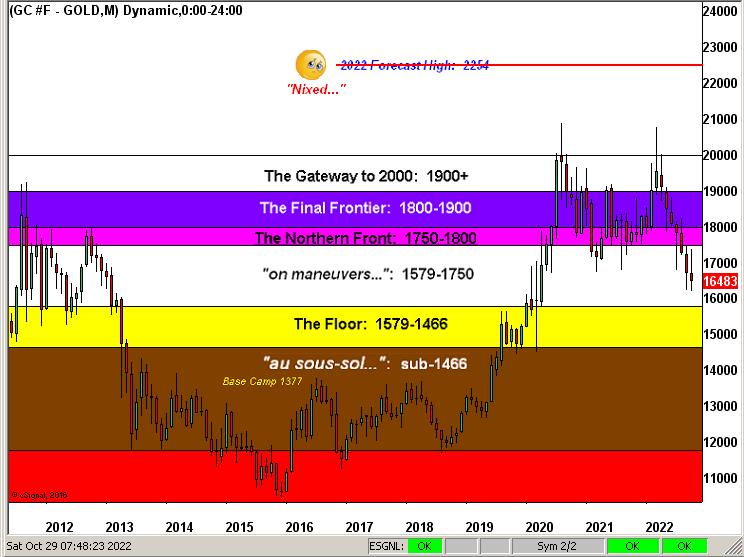 All that said, the recession being over and Gold moving lower, let the monetary/financial chaos continue! For come Wednesday, the Federal Open Market Committee shall up its Bank's Funds Rate another +0.75% to 4.00%, (the FedFunds Futures "suggesting" perhaps even a full +1.00% hike given their present 4.155% level, should they be playing advocate of the devil). Then Friday brings another (by consensus) quarter-million net new Non-Farm Payrolls for October. So: by 08 November, can all this great news keep the StateSide Democrat Party in the majority of the Congressional pews? Just make sure 'tis to Gold you enthuse! 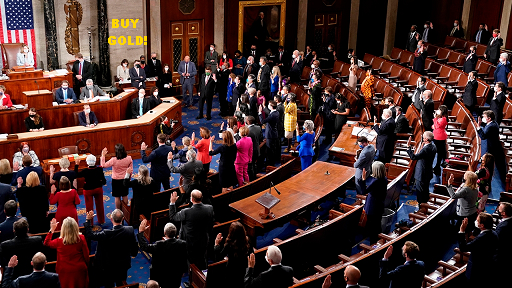