“Smoot and Hawley ginned up The Tariff Act of 1930 to get America back to work after the Stock Market Crash of '29. Instead, it destroyed trade so effectively that by 1932, American exports to Europe were just a third of what they had been in 1929. World trade fell two-thirds as other nations retaliated. Jobs evaporated.”

“They were the darkest of times, the years following the crash of the stock market in 1929. Thousands of people across the United States were cast out of their Jobs, off their farms, out of their homes and apartments, and into the crushing depths of poverty.”

“I don't give a damn about the stock market. But I do care about jobs.” 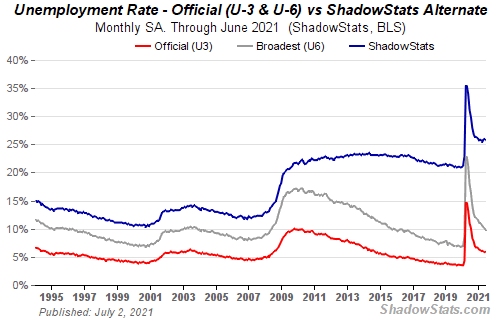 The June job numbers beat consensus with the addition of 850,000 nonfarm payrolls. The market had expected a gain of 700,000. The May nonfarm payrolls, originally reported as a gain of 559,000 were revised slightly higher to 583,000. Last March and April the U.S. lost a total of 22.4 million jobs. They have now recovered 15.6 million, leaving them still short 6.8 million jobs. That’s far from recovery, considering that the U.S. population has gone up 1.7 million since February 2020. That means they have recovered almost 70% of the jobs that were lost, even as the total population has grown 0.5%. Of the total, the private sector added 662,000 which was above consensus of 600,000. The government sector added another 188,000 which was above consensus of 80,000. The gains were primarily in leisure and hospitality with other gains in education, professional and business service, and retail trade. The number of people working part-time jumped 408,000 while the number of full-time jobs actually fell by 183,000. (Source: www.stlouisfed.org).

A number that caught our attention was a decline in number of hours worked to 34.7, down from 34.8 in May. But that May number was revised down from 34.9. The drop was attested to a fall in manufacturing hours due to parts shortages. That alters shifts and hours worked. Average hourly earnings rose 0.3% in June and 3.6% year-over-year. The market had expected a rise of 0.4% in June and 3.7% year over year. With continued high unemployment and wages and salaries not rising as much as expected, any concerns over wage inflation are being dampened.

The sector that saw the biggest jump in employment was leisure and hospitality with a gain of 343,000. That accounted for 40% of June’s increase. Manufacturing was up a modest 15,000 but employment fell in construction and motor vehicle assembly plants. Parts shortages were cited for the declines.

Overall, while the number was better than expected, the U.S. economy is still struggling to get back on its feet. Yes, more people are now vaccinated. That helps. But many jobs remain unfilled. Some are blaming the benefits but that has been shown to be largely bogus. Lack of affordable childcare and continued fear of COVID in the workplace keeps many, especially women, from working. Many have retired, thanks to a record stock market and surging house prices. They then become part of not in the labour force.

So how did the market react? The stock market surged to record levels. Okay, not all. The S&P 500 gained 1.7% to a record high while the NASDAQ surged 1.9% to a record high, thanks to shift back into risk growth stocks and out of value stocks. The Dow Jones Industrials (DJI) did not join the party but gained 1.0%. The Dow Jones Transportations (DJT) is well off its highs, gaining a small 0.4% this past week. Of the two the DJI is closer to a new all-time high than the DJT. The small cap S&P 600 actually fell 1.4% on the week and is fast fading. Small caps are usually the leaders in a bull market but underperform in a bear market. Others joining the all-time high party were the NASDAQ 100, the S&P 100 (OEX), Wilshire 5000, the Russell 1000 and 2000, and the Philadelphia Semi-Conductor Index (SOX). Notably, the S&P 500 Equal Weight Index did not once again make new highs, a divergence. Facebook, Google, Microsoft, and Nvidia all made new all-time highs as did the NYSE FANG Index. Could the S&P 500 be heading to a nirvana high over 4,400? Seems that way. However, the top of the channel looms. The index breaks down under 4,200. 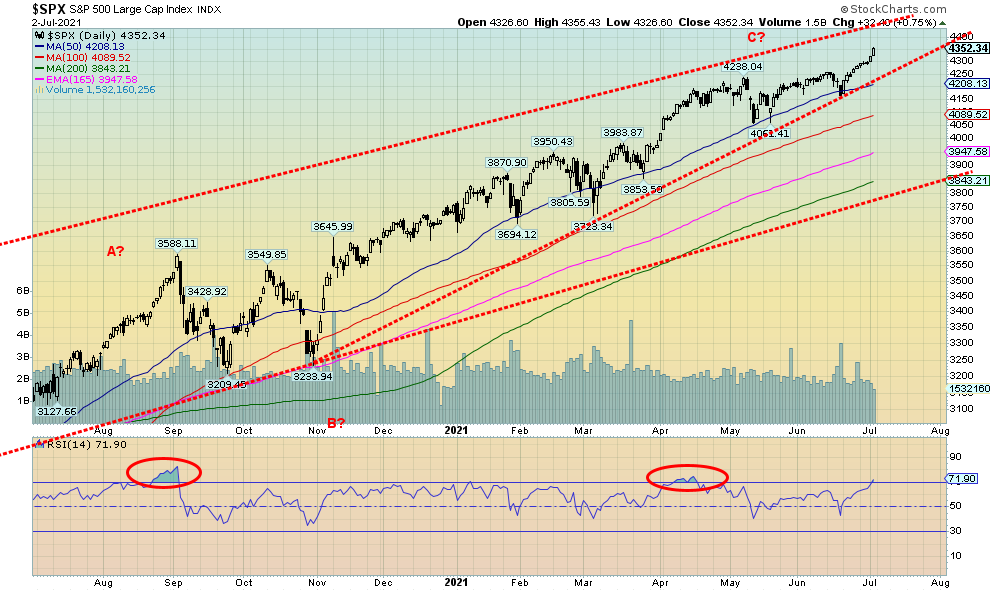 Other reactions from the employment numbers saw bonds fall as the U.S. 10-year treasury note dropped to 1.43% from 1.52% the previous week. This is significant because the cry is that there is inflation. But bond yields are falling, not rising. Inflation? What inflation? A break under 1.40% could send yields down even further. The US$ Index fell after rising earlier in the week while gold rose after falling earlier in the week. Despite the rise in gold prices, gold remains below a potential breakout to confirm a low above $1,820/$1,830. The precious metals gained on the week with gold up 0.3% and silver up 1.6%. The gold stocks gained as well with the Gold Bugs Index (HUI) up 0.5% and the TSX Gold Index (TGD) gaining 0.8%. Both were down earlier in the week. Oil prices rose to another 52-week high with WTI oil up 1.5%, closing over $75 while natural gas (NG) also hit a 52-week high, up 4.0%. But the energy stocks faltered with the ARCA Oil & Gas Index (XOI) down 1.5% and the TSX Energy Index (TEN) off 1.3%. A divergence signaling a potential top? 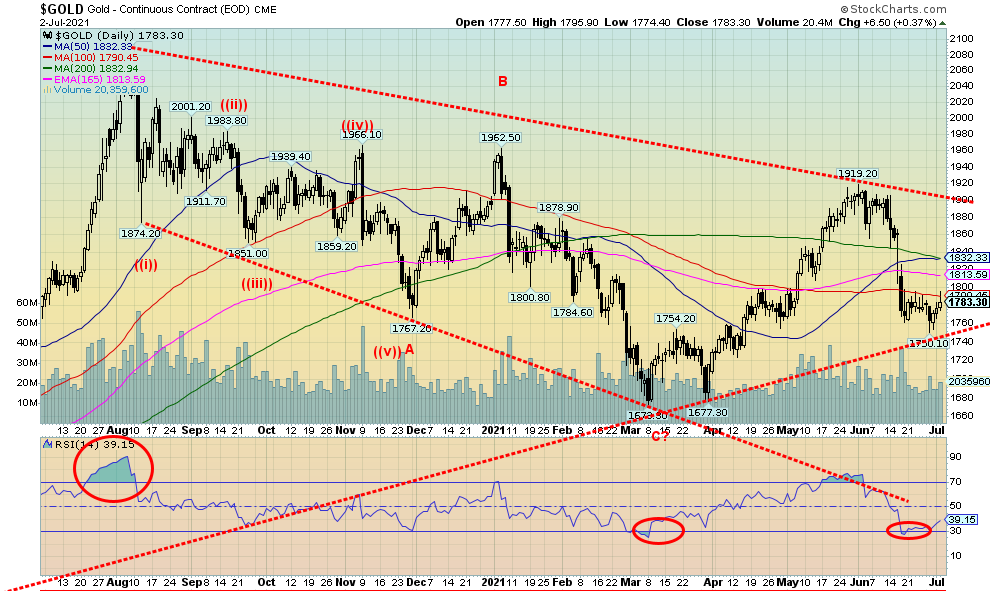 Overall, while the U.S. chortled that things are booming, thanks to another big rise in employment, the reality is they remain well short of where they were before the pandemic. Meanwhile, the population grew and millions remain out of work and some may never find work again. Yes, the U.S. is getting vaccinated and that helps. But the costs of the record heat wave in the West coupled with a record drought have not yet been tallied.

The U.S. infrastructure remains a disaster waiting to happen (see Surfside City) and the full effects of climate change have not been determined as the U.S. and many other jurisdictions (Canada?) remain unprepared for the consequences and the eventual soaring costs. Meanwhile, the political divide is as bad if not worse today than it was at the time of the 2020 election. The consequences of the January 6, 2021 insurrection on Capitol Hill are not resolved. How all this impacts economic growth going forward is undetermined but none of it is positive. Meanwhile, money supply (M1) grew 1.5% in May and is up an astounding 377% since February 2020. The Fed’s balance sheet grew $143 billion or 1.8% in June and is up 94% since February 2020. QE continues unabated ($120 billion/month), yet the Fed drained the financial system a record $992 billion with reverse repos on June 30, 2021. Yes, almost a trillion dollars. Something is not right.

Chart of the Week

We would also expect a US$ Index high somewhere in that period as well. The high with the US$ Index does not necessarily correspond exactly with the low in gold prices. We’ve indicated the high with the red arrows. Note the actual highs occur either near the low or a few months later.

Note that the December 2016 low was actually a higher low than the December 2015 low which Merriman cites as the 7.83-year cycle low. The December 2016 low was still significant in that it was a higher low, suggesting that the cycles for gold had shifted to the upside and a new 7.83-year cycle was underway. McCellan noted that gold tends to follow 3 years up and 5 years down pattern. However, the period 2001–2008 did not follow that pattern. The 2008–2016 period followed the pattern almost perfectly with a high in 2011. How is the current period doing?

New highs/lows refer to new 52-week highs/lows and in some cases all-time highs.

David Chapman is not a registered advisory service and is not an exempt market dealer (EMD) nor a licensed financial advisor. We do not and cannot give individualised market advice. David Chapman has worked in the financial industry for over 40 years including large financial corporations, banks, and investment dealers. The information in this newsletter is intended only for informational and educational purposes. It should not be considered a solicitation of an offer or sale of any security. The reader assumes all risk when trading in securities and David Chapman advises consulting a licensed professional financial advisor before proceeding with any trade or idea presented in this newsletter. David Chapman may own shares in companies mentioned in this newsletter. We share our ideas and opinions for informational and educational purposes only and expect the reader to perform due diligence before considering a position in any security. That includes consulting with your own licensed professional financial advisor.