Transitory or Not, Inflation Is Here. It Could Be Much Higher Than You Realize 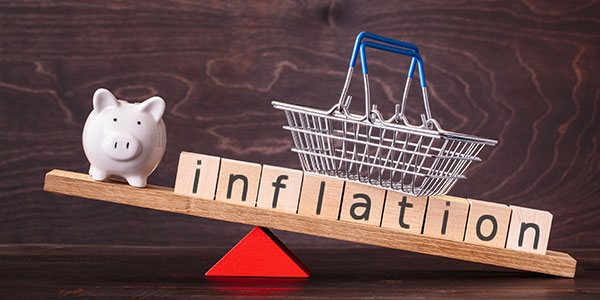 I’ve been writing about the possibility of higher inflation for months, and now it looks to have finally made landfall. May’s headline consumer price index (CPI) came in at 5% year-over-year, the highest in over a decade.

The real rate is likely even higher.

Energy commodities, and gasoline in particular, jumped the most of any other measured item. Energy increased 54.5% year-over-year, gasoline 56.2%, as oil prices hit multiyear highs this week on strong travel demand. A barrel of West Texas Intermediate (WTI) touched $71 today, a level we haven’t seen since October 2018.

Take a look at what happens when you strip out volatile energy and food prices. Core inflation, as it’s called, surged 3.8% compared to last year—which doesn’t sound impressive until you realize that’s the fastest rate in nearly 30 years. The last time we saw core inflation this high, the top films in America were White Men Can’t Jump and Basic Instinct, and General Motors topped the list of Fortune 500 companies. 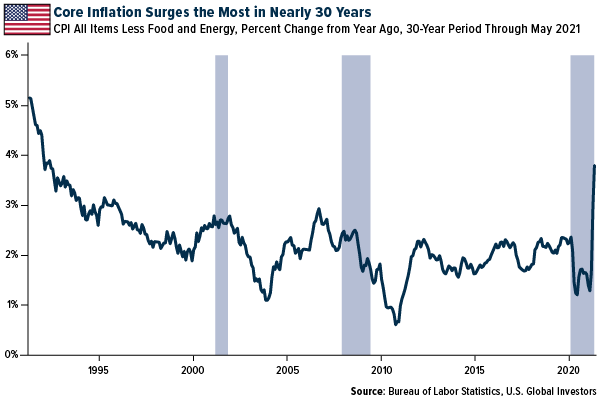 I hope no one reading this is in the market for a new car right now. Thanks to the ongoing semiconductor chip shortage, the supply of new vehicles has all but evaporated, pushing up the price of previously owned cars and trucks. The Manheim Used Vehicle Value Index hit a fresh all-time high in May, suggesting a 48% increase in prices compared to last year. Pickup trucks were up a staggering 70%.

Expectations are mixed for how much longer the chip shortage will last. Goldman Sachs chief Asia economist Andrew Tilton told CNBC last week that he believes we’re in “the worst period” right now, insinuating we’ll see some improvement in the second half of the year. Patrick Gelsinger, CEO of chipmaker Intel, isn’t so sure. He says the shortage could last another two years.

Hope for the Best, Prepare for the Worst

I think policymakers and analysts are just as torn about the potential longevity of this current rash of inflation. The Federal Reserve insists on describing it as “transitory,” mostly in an effort to allay investors’ fears and calm markets.

Only time will tell if this assessment was accurate, but for the time being, the gesture seems to be working: The S&P 500 closed at a new record high last Thursday, the same day inflation data was released. Meanwhile, gold, historically used as an inflation hedge, barely budged, and bitcoin, a digital version of gold, retreated by as much as 1.8%.

It’s possible that May’s inflation rate was already priced in. That being said, I would still strongly consider adding to my gold exposure, including gold mining stocks. Bitcoin should also be a consideration.

As I’ve pointed out before, I believe the CPI significantly understates the impact inflation has on household wealth. The real rate is likely much higher. An alternate measure, John Williams’ Shadow Government Statistics, shows that inflation could actually be closer to 13% year-over-year. Invest accordingly.

On the Road Again

At the same time that new vehicles are in short supply, Americans have begun to travel as much as they ever have, a key driver behind rising fuel prices. According to the travel industry news website Skift, the number of Americans who traveled in May surpassed those who traveled in February 2020, before the pandemic. More than 42% of Americans said they traveled within the U.S., compared to 40.5% 16 months ago.

And it’s not just vehicular travel we’re talking about here. U.S. airports have gotten so unexpectedly busy that the Transportation Security Administration (TSA) is seeking internal office volunteers to handle non-screening tasks such as management of security lines.

This is hugely supportive of travel industry equities, airlines in particular, as we progress deeper into the busy summer travel season.

Although only 2% of Americans traveled outside of the U.S. in May, compared to 7% in February 2020, I expect this to change soon as vaccination rates improve. Last week, France became the latest European Union (EU) member to start accepting vaccinated visitors from the U.S. and elsewhere, and a new travel pass that allows people to move more freely between European countries was finally endorsed by EU lawmakers.

“Travel companies need to be prepared” for the summer surge, commented Haixia Wang, VP of research at Skift.

That’s precisely what domestic and international airlines continue to do. Air France is set to bring 22 aircraft out of storage in order to significantly increase flights to the U.S. Air Canada will reportedly resume a number of international flights this month, from Canada to India, Mexico, the Caribbean and more.

Watch my six reasons to invest in airlines before the make a full recovery from pandemic lows. Click here!

All opinions expressed and data provided are subject to change without notice. Some of these opinions may not be appropriate to every investor. By clicking the link(s) above, you will be directed to a third-party website(s). U.S. Global Investors does not endorse all information supplied by this/these website(s) and is not responsible for its/their content. Beta is a measure of the volatility, or systematic risk, of a security or portfolio in comparison to the market as a whole.

The S&P 500 Stock Index is a widely recognized capitalization-weighted index of 500 common stock prices in U.S. companies. The consumer price index (CPI) measures the average change in prices over time that consumers pay for a basket of goods and services, commonly known as inflation. The Fortune 500 is an annual list compiled and published by Fortune magazine that ranks 500 of the largest United States corporations by total revenue for their respective fiscal years. The Manheim Used Vehicle Value Index is a time-series measurement of wholesale used vehicle prices.

Holdings may change daily. Holdings are reported as of the most recent quarter-end. The following securities mentioned in the article were held by one or more accounts managed by U.S. Global Investors as of (03/31/2021): Air Canada.