When gold stock bulls complain about a “smack down”, a “hit” or a “smash” against the poor gold stock sector what they should be thinking about is what a relatively small market the gold stock universe is compared to the multitude of galaxies populated by cyclical and risk on stocks and commodities and the massive bond market. The gold stock sector’s noise to trading volume ratio must be far and away the biggest bull market on the planet (I know because I am part of it :-)).

And once in a while the sector actually warrants all that noise. Like in 2001 when markets were beginning a bear phase and economies were faltering. Like in Q4, 2008 when gold stocks were crashing to unwind previous inflationary excesses, leading stocks and commodities into a terrible crash and rebounding first. Like in March of 2020 when the miners crashed and ‘V’ bottomed to lead what is to this day an ongoing economic recovery born of the inflation that gold and gold stocks first sniffed out.

And that is the rub. Personally, I have been favoring the prospect that a strong bull market (target: 500) after initially projecting an A-B-C upside correction target of 375 in 2019, which we put in the books at 373.85 last August. But in order to continue favoring an ongoing bull market scenario the macro fundamentals must play ball; and play ball they have not since last summer. Hence, the A-B-C upward correction and ongoing bear market scenario gains strength with each passing month of positive economic activity, regardless of the inflation it was created with. 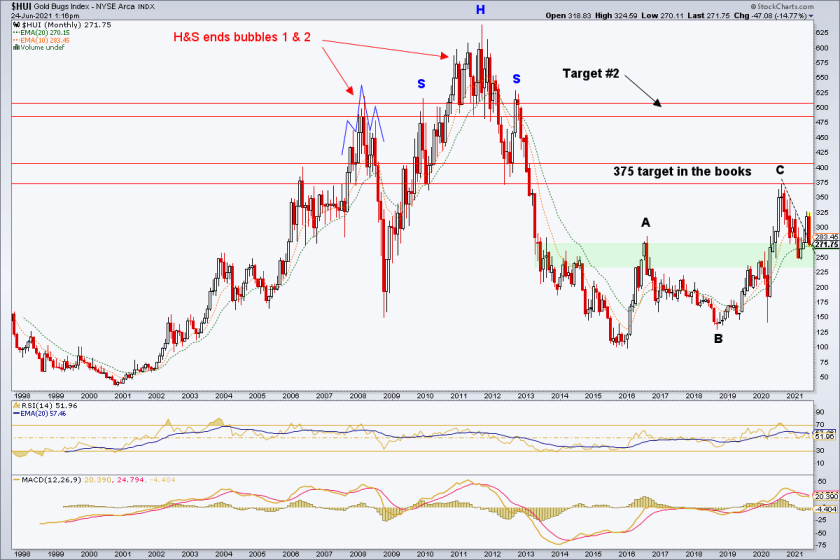 Enter once again the Macrocosm, because it is time for a reminder to myself if not you that in order for the gold stock sector to be anything special, the macro must rotate negative. Speaking of rotation, it has been rotating alright, but with yields and inflation signals fading that rotation is not into a deflationary situation that would produce a big gold stock buying opportunity but is instead something of an interim Goldilocks scenario (easing inflation expectations, firming USD, Tech and Growth bid up, etc. while the economy remains okay).

You take interest at the prospect of Stagflation (inflation with faltering economic activity) and you take more interest if gold out-performs major currencies, the yield curve steepens and gold starts out-performing cyclical commodities. Then you really get the bull inspiration going if economies start to falter, confidence declines and market signals start flipping risk ‘off’.

On balance, none of that is happening now. Hence, these ladies should be avoided. They cheer. That is what they do. It’s their job and they do it well. Avoid them. 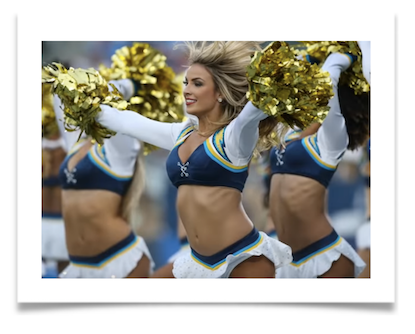 As for the market’s current rotation, it has been an at least interim move back into big Tech, into Growth and away from the reflation trades of late. That was foretold well ahead of time by the 30yr yield as it was due for a cool down when it hit 2.5%. Ah, but the right side shoulder under construction could vanquish Goldilocks if it resolves bullish as currently expected and the inflation trades come back on. 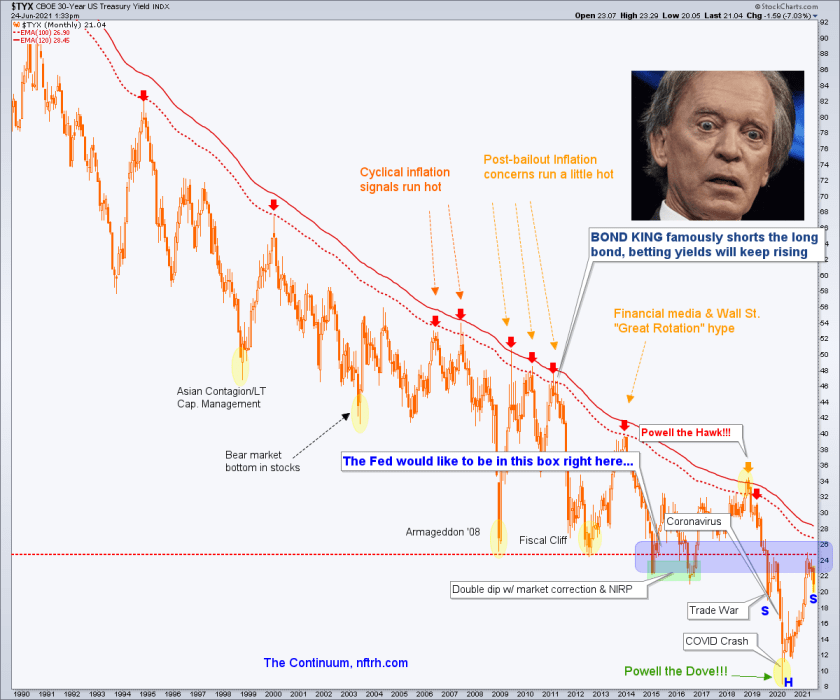 But referring to our handy Macrocosm graphic, that may get inflationist gold bugs frothed up again but it would still NOT be a favorable macro condition. Not until and unless the inflation morphs to Stagflation and then at least, we’re in new territory for the miners as gold could conceivably out-perform stocks and commodities as the Stag grinds away at economic activity. 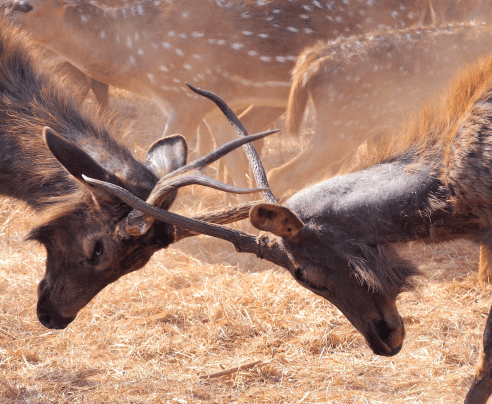 One Macro Reset Comin’ Up

Circling back to the gold stock sector, there is a reason that gold stocks only rarely bull for real and when they bull for real they really bull. Bounces and rallies will come (I think there is a decent prospect for an oversold bounce coming soon) and go, but to lock and load a real opportunity the rare case of positive fundamentals while the sector gets sold down must be engaged.

Since last summer it has not been the time because cyclical inflation has driven gold (miners’ product) down in relation to cost input commodities, materials and resources. That is what I call a sector fundamental and it is poor.

Gold has also been driven down in relation to risk ‘on’ asset markets. This I call a macro or psychological fundamental. Rather than falling for the bitching and moaning out there about how evil entities are manipulating gold and its miners, how about simply respecting the truth of this market chart. That truth states that gold is trending down with few signs of a bottom as yet in relation to a world of cyclical and risk ‘on’ markets. 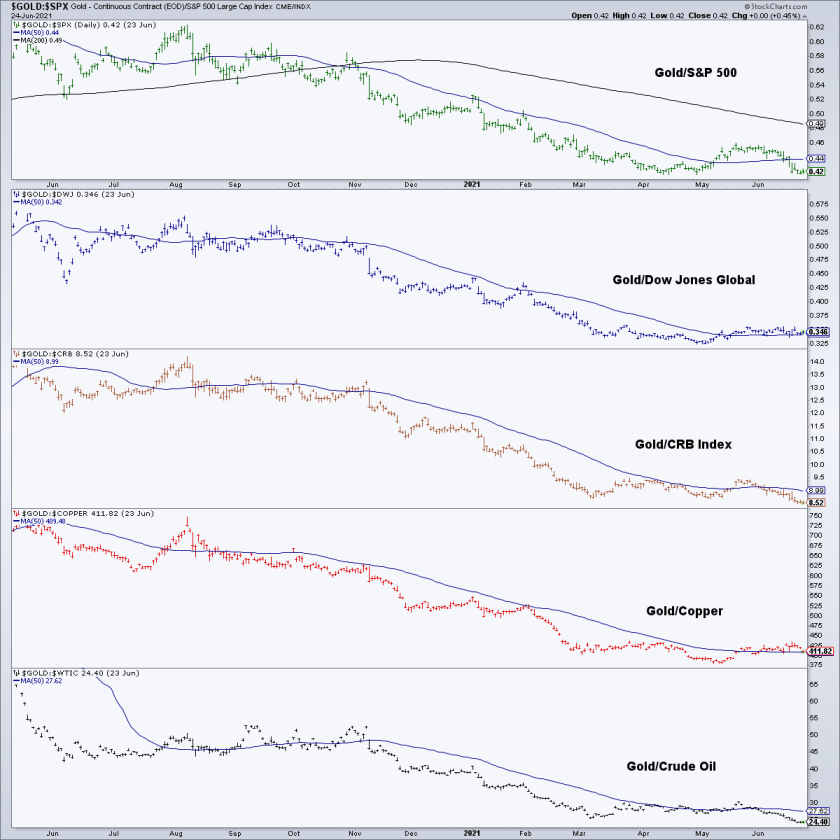 As for the two largest planets of the Macrocosm, the economy is still growing and risk remains ‘on’ per this spread between quality (7-10 yr Treasury) and Junk (HYG) bonds. Those are facts. You can chase conspiracies all over the place, but they are facts nonetheless. The macro is not yet aligned positive for gold or especially, gold mining. That could change at any time, but as yet it has not changed. That’s another fact.

There is a world full of investments, trades and speculations out there. Since the Covid-crash of 2020 NFTRH has been managing the whole of that financial world, including the gold sector because I see certain gold stocks as having a place in the portfolios (a couple I’ve held since 2019 are well over +200% despite having consolidated for nearly a year). But if your trying to make chicken salad out of chicken bleep by dedicating to the sector you should consider waiting for a proper macro alignment.

Personally, I look forward to such a time, but my wishes are always subordinate to market realities. That’s why we do the work each week. For example, the work done since March has indicated a market rotation back to Tech and Growth. Okay, so be it. We went with it. It has also indicated no significant renewal of gold stock fundamentals. Okay, so be that too. It’s the markets.