14 hours 15 minutes ago
COT Silver Report - August 12, 2022
1 day 22 hours ago
Was $18 Silver the Bottom? Next Pivot? - Lawrence Lepard
3 days 2 hours ago
Silver Coin Premiums – Another Collapse?
4 days ago
The End Game for Silver Shenanigans...
5 days ago
The Fed Is All Talk, and JPMorgan Trial EXPLAINED - Chris Marcus

Why Dave Ramsey and Other Financial Gurus Are WRONG About Gold

Longtime gold bashers are gloating over the precious metal’s recent price slump. Gold prices have declined more than 10% in the first quarter of 2021.

But the perma-bears shouldn’t feel vindicated. After all, anyone who heeded their advice missed out on gold’s record run in 2020 – and on many years of outperformance since 2001.

While gold bugs are often accused of having an unhealthy obsession with the metal, the “anti-gold” bugs reveal a deep-seated bias that can only be explained as irrational or dishonest.

It’s no mystery why many who work in the financial industry hate gold. They are in the business of pushing paper assets, and physical precious metals held outside of bank and brokerage accounts generate no fees for them.

Financial professionals concoct various rationalizations for why gold is a bad investment.

They can certainly point to periods when stocks and bonds have outperformed.

Of course, no one particular asset class can be counted on to generate strong returns every single year.

The whole point of diversification into alternative asset classes including precious metals is to mitigate the risks inherent in an all-paper portfolio. These include inflation risk, interest rate risk, credit risk, counterparty risk, and even political risk.

It’s not just the opinion of bullion dealers that precious metals play a valuable role in investment asset allocation.

It’s the opinion of the respected firm Ibbotson Associates (now part of investment analytic giant Morningstar). Ibbotson found that investors who put 7.1% to 15.7% of their portfolios in precious metals enjoy superior risk-adjusted returns. 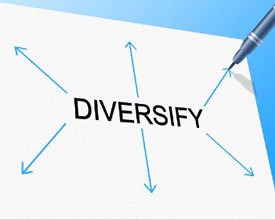 Gold shows virtually no correlation to stocks and bonds, meaning it can rise when paper assets fall. Yet the average investor has nowhere near even the bare minimum suggested by Ibbotson Associates to hedge against risks in financial assets.

Meanwhile, investors are bombarded with misinformation about gold from Big Finance and popular personal finance gurus.

Millions of people have turned to Dave Ramsey for financial guidance.

He recently stirred legal controversy by firing several employees for having premarital sex.

Clearly, he sets high standards for others. What about for his own advice?

Unfortunately, while some of his tips about managing household finances responsibly may be sound, he doesn’t seem to have a clue about sound money itself.

In a conversation posted to YouTube last year with a caller who inquired about gold, Ramsey said, “It is a golden colored rock. It has no intrinsic value except for the fact that two people are fighting over it. And that’s the only thing that gives it value – the same exact thing that gives a green piece of paper with a president’s face on it value.” 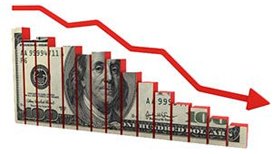 While he’s essentially correct when it comes to unbacked Federal Reserve Notes, Ramsey would have you believe that gold’s value is just as fleeting.

In fact, gold is unlike any fiat currency in that it does have intrinsic value.

Regardless of whether an ounce of gold is minted into a coin and has an arbitrary face value stamped on it, that ounce of gold possesses – and will always possess – valuable properties as a scarce, highly dense, highly conductive, highly ductile, aesthetically pleasing metal.

Gold historically has retained its purchasing power better than any paper currency ever invented. Yet Ramsey claims, “It has a crummy track record as an investment.”

He has a crummy grasp of recent history.

Incredibly, Dave Ramsey asserts on his web site, “Since the dollar isn’t backed by gold anymore, investing in this precious metal won’t help you if inflation hits.”

That statement is so nonsensical, it seems Ramsey experienced some sort of mental glitch when writing it.

The whole point of gold as investment thesis is that it serves as a hedge against an unbacked dollar! And yes, precious metals will help you over periods of rising inflation pressures.

During the decade of the 1970s, as paper assets got clobbered by inflation, gold delivered average annual returns of 30.7%. The S&P 500 barely eked out nominal gains of 1.6% per year – which were far too puny to keep pace with an inflation rate that surged into the double digits by the end of the decade.

Gold Haters: Those “Living in the Past” Play with “Shiny Poo”

Despite gold’s proven track record of boosting investment returns during trying times for paper assets, the naysayers can’t seem to let go of their anti-gold animus.

Gold is tantamount to “shiny poo,” according to Big Finance. 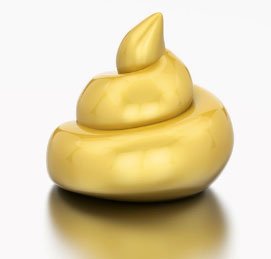 Meanwhile, some of the “digital” bugs who are promoting Bitcoin and other cryptocurrencies also feel compelled to bash gold.

Grayscale Investments, which operates an exchange-traded Bitcoin product, went so far as to launch a “drop gold” campaign. It produced an anti-gold TV commercial than has aired frequently on CNBC. The ad portrays gold buyers as “living in the past” and out of step with the “digital world.”

There is no denying that Bitcoin has gained tremendous market value in recent years. It recently surpassed $1 trillion in total capitalization.

But barely ten years old, cryptocurrencies are much more volatile than gold and have nowhere near its historical track record of maintaining value. Bitcoin could conceivably be worthless in a few years’ time if new technologies supplant it.

Gold, on the other hand, is a basic element that can’t be digitally replicated or replaced. And it still functions without a computer or when the power goes out.

Gold has been valued and used as money for thousands of years. And central banks today are steadily accumulating gold.

Unlike a fiat currency, gold’s value can never be hyperinflated away. Unlike a bond, it can never default. And unlike a publicly traded company, it can never go bankrupt.

That’s why gold has real value.

Stefan Gleason is President of Money Metals Exchange, the national precious metals company named 2015 "Dealer of the Year" in the United States by an independent global ratings group. A graduate of the University of Florida, Gleason is a seasoned business leader, investor, political strategist, and grassroots activist. Gleason has frequently appeared on national television networks such as CNN, FoxNews, and CNBC, and his writings have appeared in hundreds of publications such as the Wall Street Journal, Detroit News, Washington Times, and National Review.