Why Gold’s Losing Streak May Soon Turn Around

The gold market enters trading for the month of November on a losing streak. Can bulls finally turn things around?

Their first test will be to defend the line of support established from the September and October lows. Although the gold market registered a seventh consecutive monthly decline in October – marking its worst string of monthly losses in 50 years – daily prices didn't actually break down to new lows for the year.

Despite another losing month, downside selling pressure appears to be fizzling out. Gold prices have been consolidating within a narrowing range over the past several weeks and have even popped above the downtrend line today (November 1). 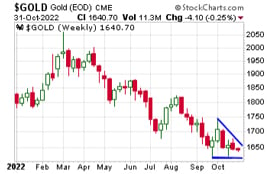 A decisive breakout above the consolidation range under $1,750 would carry bullish implications heading toward year end, while a violation of support at $1,600/oz could trigger another wave of selling.

Gold bulls might find some encouragement in the silver market, which is showing some relative strength. Silver’s consolidation pattern, unlike gold’s, shows an uptrending support line.

As long as silver continues to trade above its low from late August, it will continue to show a positive divergence versus gold. When silver leads, that generally a bullish a sign for the precious metals space.

Of course, the silver market still has some work to do in order to establish a meaningful uptrend. For now, it remains rangebound with a slight bias to the upside. A strong close above $21 would point to a new uptrend.

The primary fundamental impediment to higher metals prices is the lack of any respite from Federal Reserve rate hikes. The Fed has embarked on its most aggressive tightening campaign in decades. And as of yet, Fed policymakers haven’t signaled that they intend to let up.

They will convene on Wednesday to announce their latest decision. Markets have already priced in yet another outsized 0.75% bump in interest rates.

Given the magnitude of the rate increases and corresponding rise in the U.S. dollar’s foreign exchange rate, gold and silver markets could have gone down a lot more in 2022 than they actually have. An investment in gold at the beginning of the year has gone on to perform better than an allocation to long-term bonds or a stock market index fund (despite the big October rally in equities).

The precious metals markets have still performed disappointingly to bulls who had high expectations given the 1970s-style outbreak of inflation running through the economy.

Inflation is proving to be persistent. The Fed’s willingness to fight it may prove to be transitory.

Regardless of the outcome of the upcoming election, central bankers aren’t likely to find much political support for additional rate hikes. The government faces a massive surge in borrowing costs on a record-high $31 trillion debt load while the economy faces a potentially devastating housing-led recession in 2023.

Whether political or economic factors finally force the Fed to throw in the towel, the rate hikes will eventually come to an end. Policymakers may declare some sort of victory over inflation, but they won’t be able to undo the damage they have already caused.

Costs of living won’t come back down to pre-2020 levels. They will keep rising as the purchasing power of the currency keeps declining.

Currency debasement is a permanent feature of our fiat monetary system. The only thing that varies is the rate of debasement.

Even if the Fed somehow gets the “official” inflation rate down to its 2% target, that will come on top of the recent spate of above-target (8%-10%) inflation.

Over time, gold prices respond inversely to the cumulative destruction of the U.S. dollar’s purchasing power. Given the extent of the recent and ongoing decline in the Federal Reserve note’s real value, gold – and silver as well – may soon have a lot of catching up to do.