Senator Elizabeth Warren and President Joe Biden claim that inflation[i] is caused by greedy corporations. And they propose to solve this problem by making the corporations pay. Whether it’s extracting a “windfall profits” tax, crushing them under even more regulation, or attacking them with antitrust enforcement, the idea is the same. They propose to harm the corporations which produce the things we need such as energy and food, which will somehow cause prices to drop. They think that hurting producers will do good to consumers.

Think about this. Take as long as you need.

This kind of blatant zero-sum, win-lose view is the essence of socialism. It may be popular among the Left, but fortunately it is outside the mainstream. 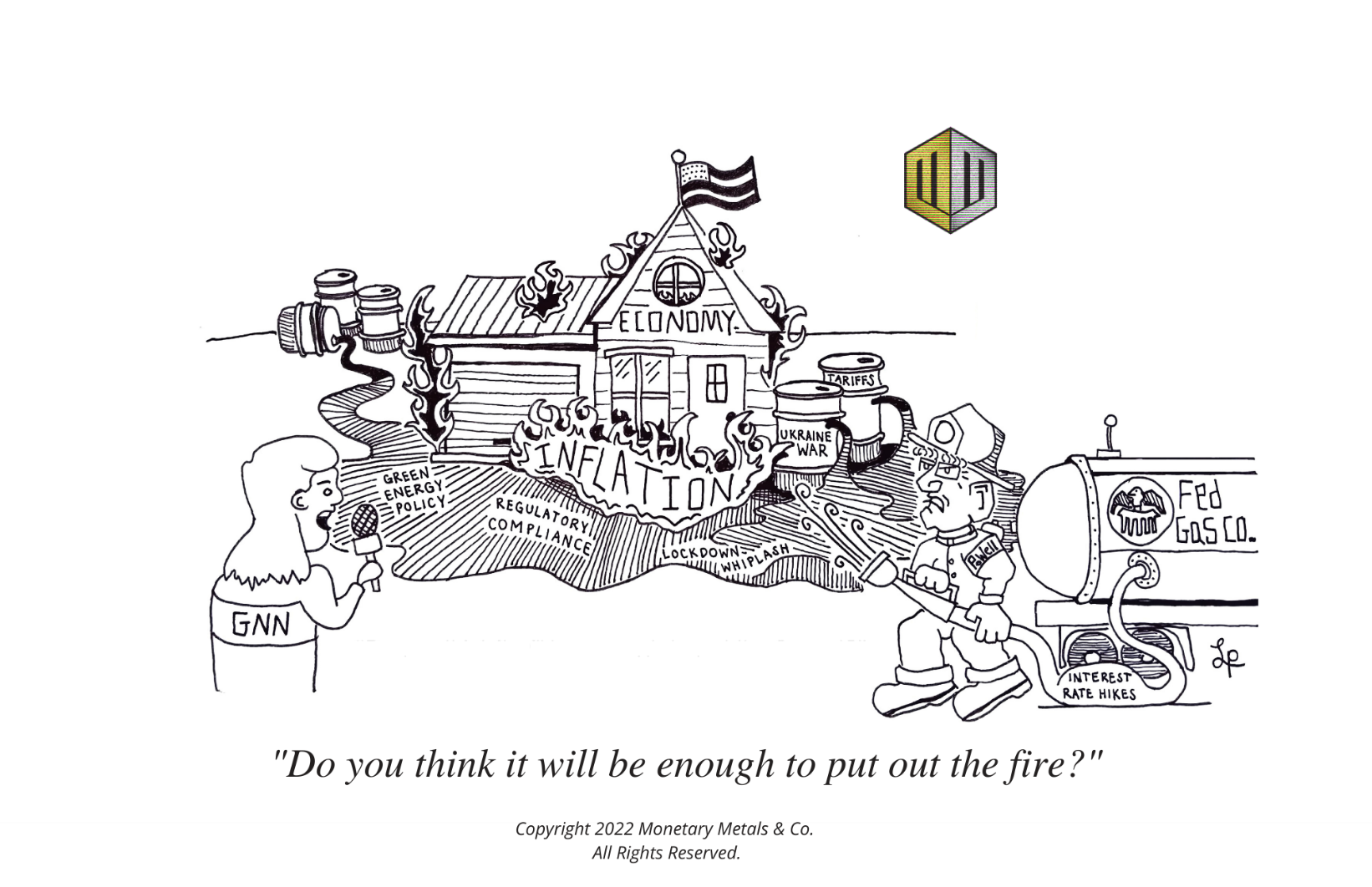 However, there is a more subtle zero-sum view about money. According to the Quantity Theory of Money, a rising money supply causes rising prices, and rising prices are caused exclusively by a rising money supply (I have written extensively about nonmonetary forces driving up prices: mandatory useless ingredients, lockdown whiplash, green energy restrictions, trade war and tariffs, and actual war in Ukraine. For a complete review of this analysis, download our Gold Outlook Report 2022).

Prices have certainly been on a tear recently. The Consumer Price Index is over 8% for the first time in a very long time. So, what is the Fed to do about it, what central plan should it impose?

The Quantity Theory holds that, to control inflation, the Federal Reserve should reduce the quantity of dollars, or at least reduce the rate of increase. It is supposed do this by hiking interest rates (it has hiked twice so far this year). At higher interest rates, the theory holds that there should be less new borrowing. Thus, the rate of new money coming into the economy is reduced. And inflation is supposed to be mitigated.

According to this theory, there is a tradeoff between unemployment and inflation. So, in order for consumers to get more for their money, workers need to be laid off.

But less borrowing, of course, means lower production. This logic commits a similar error as the above idea of harming producers. Only, the target here is the workers who produce the goods. To state the contradiction explicitly: fewer workers, producing less goods, will cause lower prices.

To see why, put yourself in the shoes of the owner of a chain of hamburger restaurants. You are always thinking about expanding. But one thing stops you from building the next store: it would not make money. If the interest rate drops, this reduces a big expense. So you build a new store. The same is occurring at the cattle ranch which supplies you with meat, the manufacturer of grill equipment, and the trucking company which delivers it all to your store. Everyone sees a profitable opportunity to expand—to increase supply—when interest rates drop.

Unless the appetite for hamburgers also increases, the burger market has greater supply while the demand is unchanged. The price of burgers becomes soft (increasing mandatory useless ingredients may prevent the retail price from falling).

The second effect is that the marginal hamburger restaurant, cattle ranch, and grill factory can no longer cover their interest expense. They close, thus reducing supply.

The mainstream theory focuses on the quantity of dollars and the presumed relationship to prices. It misses the direct relationship between interest rates and production: lower rates provide an incentive to increase production, and higher rates remove that incentive.

While the Fed plays along with the Quantity Theory, so far its rake hikes have been tepid. This has prompted commentators to ask if the Fed’s hikes are enough to curb inflation.

Such questions are based on a flawed understanding of inflation. Rate hikes will push prices higher, not lower.

Keith Weiner is the Founder and CEO of Monetary Metals, an investment company that is Unlocking the Productivity of Gold™ by offering a Yield on Gold, Paid in Gold® to investors. Keith is a leading authority in the areas of gold, money, and credit and has made important contributions to the development of trading techniques founded upon the analysis of bid-ask spreads. His work is widely syndicated on gold, alternative investing and mainstream sites.

[i]I italicize words when I use them according to the mainstream definition. Inflation, properly understood, means the counterfeiting of credit. Borrowing without means or intent to repay, from unwilling or even unknowing lenders. This describes the issuance of dollars perfectly. But most people mean rising consumer prices, and that is what I address in this article.