1 day 6 hours ago
This Is Why NOW Is the Perfect Time to Buy Silver - Garrett Goggin
1 day 6 hours ago
Rico Charges Dropped On Silver Manipulation Trial
2 days 4 hours ago
Has Inflation Been Defeated?
3 days 18 hours ago
COT Silver Report - August 12, 2022
5 days 2 hours ago
Was $18 Silver the Bottom? Next Pivot? - Lawrence Lepard

The ‘Wishful Thinking’ Fed Is Anything But ‘Neutral’

With last week’s second 75 basis-point rate hike, the Federal Reserve now claims it has achieved a “neutral” monetary policy stance. That would mean, in theory, that interest rates are neither stimulating nor restraining the economy.

"Now that we're at neutral, as the process goes on, at some point, it will be appropriate to slow down,” Fed Chairman Jerome Powell said.

Powell was effectively telling markets he intends to pivot away from inflation fighting. 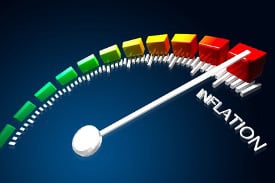 Yet inflation, even when measured by the Fed's own preferred gauge, continues to run hot.

The Personal Consumption Expenditures price index came in at 6.8% in Friday’s report from the Bureau of Economic Analysis.

A Fed funds rate that currently stands at just 2.5% doesn’t look “neutral” at all when the official inflation rate is running at 6.8%.

“Jay Powell said things that, to be blunt, were analytically indefensible,” Summers told Bloomberg. “There is no conceivable way that a 2.5% interest rate, in an economy inflating like this, is anywhere near neutral.”

Left unsaid by Summers and Powell is that the slowing economy and highly leveraged financial markets cannot take much more rate hiking without collapsing. That’s why the Fed is signaling it will wind down its tightening campaign – before achieving any kind of victory over inflation.

In the face of four-decade highs in inflation, monetary policy has gone from ultra-accommodative to slightly less accommodative.

It likely will never get to a truly neutral level – at least not for any prolonged period.

The financial system and the U.S. government itself (the world’s biggest debtor) need interest rates to continue to be suppressed. Negative real rates enable borrowers to be bailed out over time by rising inflation and rising nominal asset values.

Gold and silver prices lost ground when the Fed started talking tough on inflation. But they rebounded last week when central bankers dialed down expectations for future monetary tightening.

The Fed is anything but neutral when it comes to crafting monetary policy. Central bankers inevitably pick winners and losers when they manipulate interest rates and pump liquidity into the financial system.

The winners of Fed policies are typically Wall Street investment bankers and Washington, D.C. politicians. And so are the holders of tangible assets financed with debt.

The losers are: 1) savers and pensioners on a fixed income who don’t receive earnings that keep pace with inflation; and 2) workers whose wages never get them ahead of rising costs of living.

It is possible, however, for individual investors to position themselves on the winning side of Fed policy decisions.

During some economic cycles, it pays to be in stocks. During others, it’s far more profitable to be in assets that benefit from the unintended consequences of the Fed’s inflationary policies.

As the U.S. economy heads into recession, conventional stocks are vulnerable. Meanwhile, demand for safe-haven alternative assets combined with ongoing inflation pressures could provide a big boost to undervalued gold and silver markets.