A 15.4% Annualized Rate Of Inflation

This rate of inflation is being widely reported as being 8.5%, and that is bad enough. However, the 8.5% inflation figure is based on 11 months without the Ukrainian War, and one 1 full month with the War, so it doesn't tell the real story.

The good news is that even if that rate of inflation does become persistent, we can bring it down if we want to. Unfortunately, the bad news is that the textbook solution for doing so requires increasing interest rates to 24.1%.

Adding A Second Source Of Inflation

This analysis is a brief update of a much more substantial analysis, "Rising Inflation, The Taylor Rule, Rational Bubbles & The Fatal Flaw" (link here). If you haven't read it, or if it has been a while, that analysis is very much worth reviewing in terms of the conflict between controlling inflation versus trying to keep investment markets from crashing.

In ordinary times, these annual comparisons are the best way to look at inflation, as the monthly numbers can be more volatile. However, we are not in ordinary times.

We already had a fast-rising rate of inflation that was the result of easy money policies during a time of supply chain shortfalls. Too many dollars chasing too few goods had already produced a near 8% annualized rate of inflation, even before the Ukrainian War. The War and sanctions have produced another source of inflation, primarily with energy and food for now, but this could also spread to many other products.

What the March of 2022 CPI contained is the first month where we had both sources of inflation working simultaneously. Because it is the only month we have this information - and both sources at this point are looking quite persistent, it is, therefore, worthwhile to look at this single month on an annual basis to see what it shows us - understanding that this will be a volatile measure.

The CPI on a seasonably-adjusted basis rose by 1.2% in the month of March. If we annualize this (using the formula on page 65 of the manual for those of you at the workshop this past weekend), then this becomes a 15.4% annual rate of inflation. Rephrased, if we get 1.2% rates of inflation for twelve consecutive months, then consumer prices will be 15.4% higher after one year.

This is an extraordinary leap in inflation. If we don't seasonably adjust and just compare the February and March price levels, then the monthly rate of inflation is a bit higher at 1.3%. On an annualized basis, that would be a 16.8% rate of inflation. And, if we take into account that for most of us the prices we are paying seem to be rising at a rate that is higher than the government is saying, that would imply a still higher rate of inflation.

However, 15.4% is high enough, so that is what we will be using for the rest of this analysis in terms of being the best number we currently have for the combined impact of both sources of inflation. At least for March, having two sources of inflation approximately doubled the inflation we have all been experiencing, taking something already very unpleasant and making it much worse.

Three month Treasury yields rose to an average of 0.41% in March. However, inflation rose from the previous rolling three month average of 7.84% to 15.4%. So, we now have a negative real interest rate of almost exactly 15%. A saver without an effective inflation protection strategy can now expect to lose about 15% of the purchasing power of their savings per year. 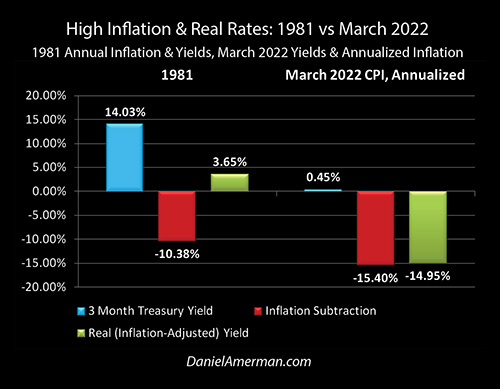 As explored in much more detail in the linked full analysis, this is very different from what we saw the last time around.

The last time inflation rates were this high, interest rates were even higher. So, yes, inflation averaged about 10.4% in 1981 - but three month Treasure yields averaged about 14%, so savers were still coming out ahead by over 3.5% per year. They were making money faster than inflation was destroying the value of that money.

The current situation, using the annualized March monthly inflation rate is 18.5% below what we saw in 1981. Yes, 1981 was a really, really tough year - but at least savers were coming out 3.5% ahead, instead of 15% behind. There is just no comparison, we are in a situation of unprecedented pain for savers, and particularly retirees.

The Taylor Rule And 24% Interest Rates

It was no coincidence that interest rates were well above the rate of inflation in 1981. This was a deliberate strategy by Fed Chair Paul Volcker, who was deliberately creating steeply positive real rates to smash interest rates down. As reviewed in much more detail in the full analysis, this policy ultimately worked - but the price was multiple years of very high interest rates crushing the investment markets while also creating recessions and mass unemployment.

Very high interest rates remain the best method that central banks have to control very high rates of inflation - which is useful information to have for those who have investments that would be impacted by very high interest rates. What Volcker did is a core part of macroeconomic theory that has been further refined, and is now referred to as the Taylor Rule. 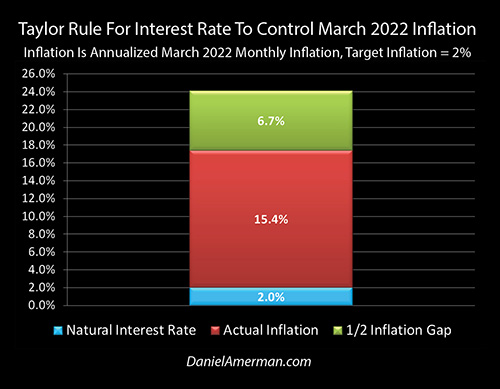 The Taylor Rule formula says that the best way for the Fed to bring down a persistent 15.4% rate of inflation is to bring the Fed Funds rate up to 24.1% (leaving aside the output gap). To be clear - that is for a persistent annual rate of inflation, not an annualized one month rate of inflation. But, we do have two powerful sources of inflation that combined for the first time in March, and that is the best information we have at this moment - a combined effect of prices increasing at a 15%+ annualized rate. In practice, we will get a better grasp of the real rates over the coming months and years, and they could be lower - or they could be higher as well.

Stuck Between A Rock & A Hard Place

The alternative to 24% interest rates is to let the 15% inflation continue. This is a truly toxic level of inflation that would be very painful for the entire population, and for retirees in particular. 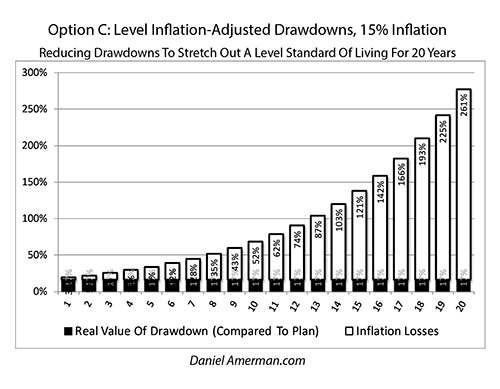 As we went over at the workshop there are several different ways that retirees who are not protected can deal with inflation, and none of them are pleasant. What is shown in the graph above (page 347 of the manual) is the third option of C. For 15% ongoing inflation this answers the question of how much money can a retiree spend each year if they are to maintain a level standard of living for the entire period of a planned retirement, which is 20 years in this example.

There was a room full of relatively sophisticated and well-read investors at the workshop. But yet, I think it is fair to say it was a shock to everyone to see just how dramatic the long-term effects of high and persistent inflation could be. The problem is that inflation is an exponential series, where we haven't seen the exponential compounding of high rates in many years. This builds over time in a way that is simply not intuitive, and it is fair to say that the average current or future retiree likely has no concept of what high rates of inflation can do to their financial plans over the long term.

So, the Fed can break the inflation. But, the 24% interest rates would likely break the markets, perhaps bringing about another global financial crisis. However, if the Fed doesn't pay that price, and we see a return of the persistent wage/price cycle form of inflation, then that inflation can just run and build - until the decision is made to raise rates sufficiently, and then we get the market crash anyway.

The Federal Reserve is truly stuck between a rock and hard place at this point. And, unfortunately, so are we all.

It is difficult to find solutions for inflation - but it is not impossible. I've spent over fifteen years doing original research on the best strategies for overcoming inflation. The best solutions that I found over the course of my research are explained in the financial education Video Courses linked here.