Ben Bernanke Wins Nobel Prize for Kicking Can Down the Road! 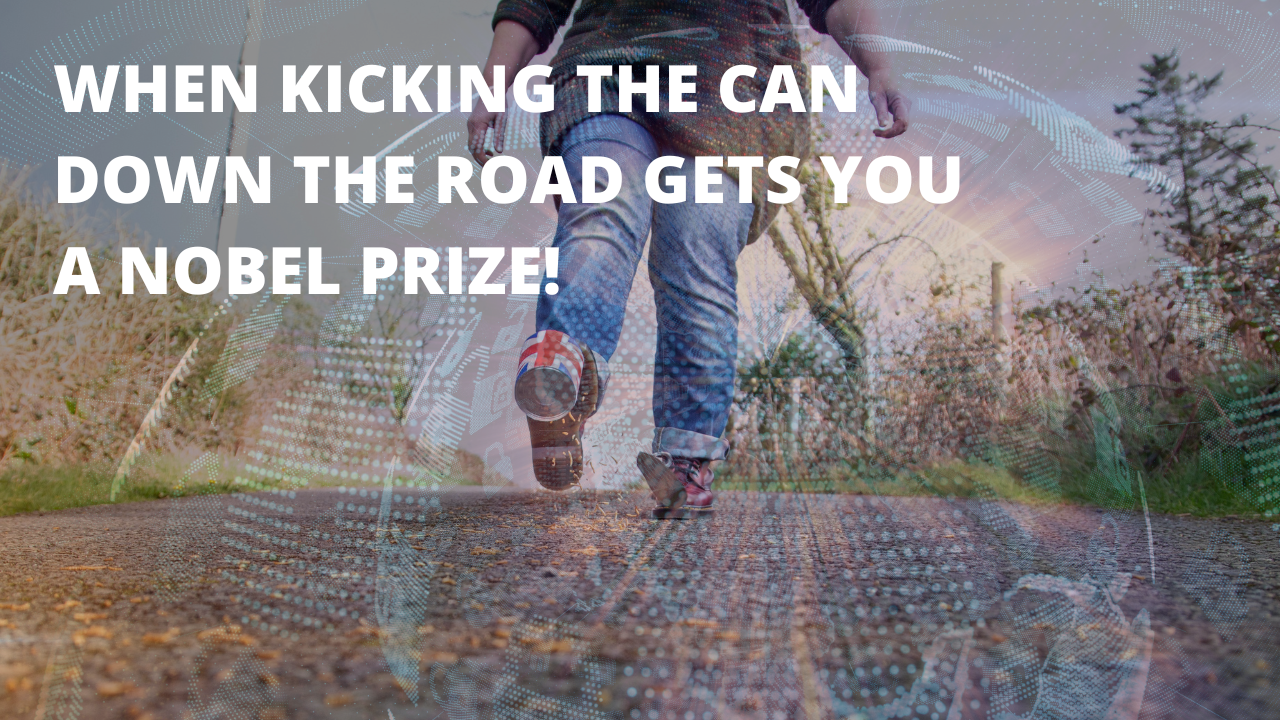 So Ben Bernanke has won a Nobel Prize for kicking a can down the road!

Many will have heard the saying ‘those who do not learn from history, are doomed to repeat it’. It is often attributed to Churchill, but he was in fact quoting George Santanya. We prefer the Stephen Hawking quote, ‘“We spend a great deal of time studying history, which, let’s face it, is mostly the history of stupidity.” as this feels more apt in this day and age.

Below we outline the Nobel-prize winning work of former Fed Chair Ben Bernanke. Seemingly to the Nobel committee his studies enabled him and subsequent central bankers to stave off economic catastrophe. We would argue that as Chair of the Federal Reserve Bernanke merely delayed the inevitable, he just kicked the can down the road for his predecessors to deal with.

Those that do not learn history are doomed to repeat it …. But what about those that don’t understand what they learnt?

The Nobel Prize is widely viewed as the highest intellectual honor, winners for 2022 were announced this week.

The Nobel Prize in Economic Science was divided among three winners. According to the press release, the three winners, Douglas Diamond, Philip Dybvig, and former US Federal Reserve Chair Ben Bernanke were chosen because “their discoveries improved how society deals with financial crises”.

The three laureates were chosen for research conducted in the 1980s that “clarifies why we have banks, how to make them less vulnerable in crises and how bank collapses exacerbate financial crises. Their analyses have been of great practical importance in regulating financial markets and dealing with financial crises.”

Diamond and Dybvig’s work show that banks bridge a gap between savers and borrowers. They provide security and liquidity to savers, while at the same time offer loans to borrowers that can be honored for longer-term contracts, such as mortgages and business loans. The problem is that banks do not keep all the depositor’s money on hand, and borrowers sometimes default on their loans which makes banks vulnerable to bank runs and possible collapse as happened frequently during the great depression. The solution to bank runs centers on mixing liquidity with psychology which is why government deposit insurance and the government (aka central banks) are always acting as lender of last resort.

Bernanke’s work revolved around the Great Depression and showed that bank runs deepened and prolonged the depression.

Bernanke as chair of the Federal Reserve put this into practice, especially after the meltdown after Lehman Brothers filed for bankruptcy in September 2008. Between the US government, the Federal Reserve, and increased Federal deposit insurance more than $19 trillion in loans and guarantees were made to the financial system.

The central bank cut interest rates and started buying assets with the government backstopping many of the programs. The research is being applauded for recognizing that governments need to step in to save the financial system.

There is no end game in the circle of bailouts ….

Banks (and other companies, such as airlines) overleveraging themselves and then being bailed out by the central bank or government is almost commonplace now. Financial regulation that was supposed to temper the “too big to fail” mentality has not been entirely effective. And as the most recent example with the UK pension funds shows – regulators were not helpful in increasing liquidity buffers and capital requirements during a time when they kept interest rates too low. But instead, regulators pushed funds into financial instruments that are now causing severe liquidity issues. (See our post Were UK pension funds just the canary in the gold mine?)

And now the Bank of England’s announcement on Tuesday that the rescue of its pension funds will end on Friday sent not only the pound to a fresh low but Wall Street equity markets globally lower. The BoE said that their program was designed to give the pension funds time for an “orderly sale of assets” but now the three-day deadline will push additional asset sales. Will the BoE wait for a “Lehman” type meltdown before acting again – or will it have a change of direction?

It’s not only the pension funds that are at risk – the IMF is warning of increased instability across the globe. Along with cutting its 2023 economic growth forecast the IMF warns that the “worst is yet to come” for the global economy. The risk of policy miscalculation has risen sharply as growth remains fragile and markets show signs of stress. About one third of the global economy risks [some amount of] contracting next year, with the US, European Union and China all continuing to stall.

Hold on to your physical gold and silver!