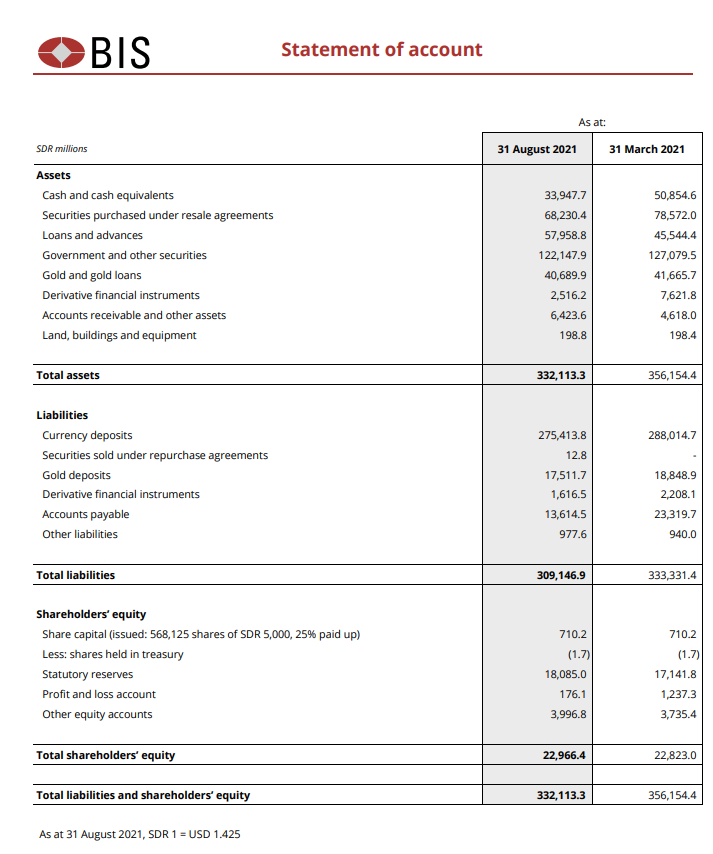 — contains information suggesting a decrease of about 38 tonnes in the bank's gold swaps in August, from 502 tonnes to 464 tonnes.

This compares to the record high estimated at 552 tonnes as of February 25 this year.

Once again it is clear that the BIS remains an active trader of significant volumes of gold swaps on a regular basis. So far there seems to be no definitive sign from its monthly reports that the BIS is reducing its exposure to gold swaps, which might be the case if the Basel 3 financial regulations were making the bank nervous about its exposure to the swaps.

Recently the secretary general of the Basel Committee on Banking Supervision has been warning of the need to implement Basel III standards across the world promptly.

Similar comments also have been reported recently on the BIS internet site by other senior executives of the bank.

The BIS rarely comments publicly on its gold banking activities, but its first use of gold swaps was considered important enough to cause the bank to give some background information to the Financial Times for an article published July 29, 2010, coinciding with publication of the bank's 2009/10 annual report.

The general manager of the BIS at the time, Jaime Caruana, said the gold swaps were "regular commercial activities" for the bank, and he confirmed that they were all carried out with commercial banks and so did not involve other central banks. Hence it is likely that the recent level of gold swaps is the highest use of them by the BIS for at least 20 years. It also seems highly likely that the swaps are still all made with commercial banks, because the BIS annual report has never disclosed a gold swap between the BIS and a major central bank.

The gold banking activities of the BIS have been a regular part of the services it offers to central banks since the formation of the BIS 90 years ago. The first annual report of the BIS explains these activities in some detail:

The use of gold swaps to take gold held by commercial banks and then deposit it in gold sight accounts held in the name of the BIS at major central banks at gold trading hubs doesn’t appear to have ever been as large a part of the BIS' gold banking business as it has been in recent years. For example, excluding the estimated 102 tonnes of gold held by the BIS for its own account, the volume of gold deposits in gold sight accounts held at major central banks for the BIS was 891 tonnes at August 31, of which 464 tonnes or 52% was supplied by gold swaps from commercial banks

At March 31, 2010, excluding gold owned by the BIS, there were 1,706 tonnes held in gold sight accounts at major central banks in the name of the BIS, of which 346 tonnes or 20% was sourced from gold swaps from commercial banks.

As can readily be seen the BIS now operates a much smaller gold banking business and the role of gold swaps in this smaller business is far greater.

If the BIS was adopting the level of disclosures made by publicly held companies, such as commercial banks, then some explanation of these changes probably would have been required by the accounting regulators. One imagines that this irony is not lost on those dealing with regulatory activities at the BIS. Presumably the shrinkage of the gold banking business shows that even central banks now prefer to hold their own gold or hold it in earmarked form -- that is, as allocated gold.

A review of Table B below highlights recent BIS activity with gold swaps, and despite the recent declines, the latest positions estimated from the BIS statements remain large.

To put this into context, this volume of gold swaps is within a 10% difference from the 504.8 tonnes of gold held by the European Central Bank. Only 10 countries report greater holdings of gold than the ECB.

No explanation for this continuing high level of swaps has been published by the BIS. Indeed, no comment on the bank's use of gold swaps has been offered since 2010.

This gold is supplied by bullion banks via the swaps to the BIS. The gold is then deposited in BIS gold sight accounts (unallocated gold accounts) at major central banks such as the Federal Reserve. ﻿

The BIS' use of gold swaps and derivatives has been extensive over the last 12 months, with the average level reported during that period still being the highest since August 2018 as highlighted in Table B below.

As can be seen in Table A below, the BIS has used gold swaps extensively since its financial year 2009-10. No use of swaps is reported in the annual reports for at least 10 years prior to the year ended March 2010.

The February 2021 estimate of the bank’s gold swaps (552 tonnes) is higher than any level of swaps reported by the BIS at its March year-end since March 2010. The swaps reported at March 2021 is the highest year-end level reported as is clear from Table A.

The table below reports the estimated swap levels since August 2018. It can be seen that the BIS is actively involved in trading gold swaps and other gold derivatives with changes from month to month reported in excess of 100 tonnes in this period.

± The estimate originally reported by GATA was 487 tonnes, but the BIS annual report states 490 tonnes, It is believed that slightly different gold prices account for the difference.

* The estimate originally reported by GATA was 332 tonnes, but the BIS annual report states 326 tonnes. It is believed that slightly different gold prices account for the difference.

GATA uses gold prices quoted by USAGold.com to estimate the level of gold swaps held by the BIS at month-ends.

As noted already, the BIS in recent times has refused to explain its activities in the gold market, nor for whom the bank is acting:

Despite this reticence the BIS is almost certainly acting on behalf of central banks in taking out these swaps, as they are the BIS' owners and control its Board of Directors.

This refusal to explain prompts some observers to believe that the BIS acts as an agent for central banks intervening surreptitiously in the gold and currency markets, providing those central banks with access to gold as well as protection from exposure of their interventions.

One possibility is that the swaps provide a mechanism for bullion banks to return gold originally lent to them by central banks to cover possible shortfalls of gold. Some commentators on the gold market have suggested that a portion of the gold held by exchange-traded funds and managed by bullion banks is sourced directly from central banks.

Robert Lambourne is a retired business executive in the United Kingdom who consults with GATA about the involvement of the Bank for International Settlements in the gold market.