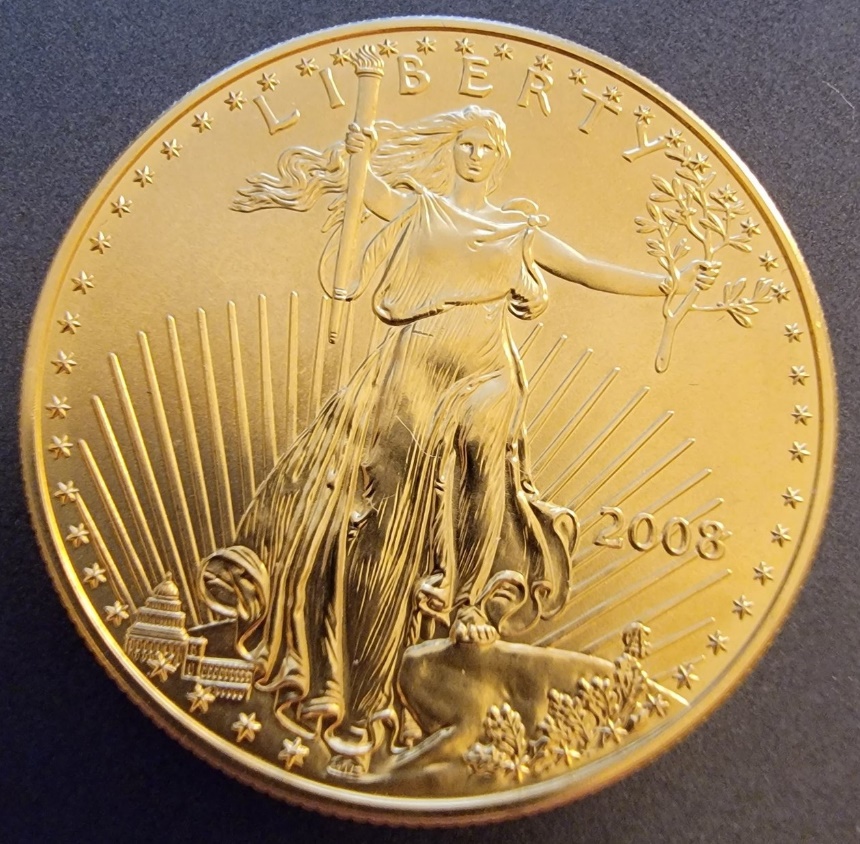 The coin which helped win the gold vs bitcoin debate at the Soho Forum
Photo credit: the author

Gold has a unique appearance. It is also astonishingly heavy—much heavier than it has any right to be. It’s just an inch and a quarter in diameter yet weighs 0.075 pounds. Everyone should hold one in his hand (and own a few).

“Look at how much prices have risen,” they gloat. “Gold hasn’t gone up nearly as much as gasoline,” they practically smirk.

It would be tempting to unlimber the Tu Quoque Fallacy, to fire back at the bitcoiners. “Bitcoin hasn’t protected anyone either.” While that might feel good, it doesn’t really address the issue. They are right, in a narrow sense.

“Gold failed to keep up,” people say. We’ll get to that in a moment.

Since March 8, oil has dropped to $90, or -25%. And gold is back to $1,800, or -12%. In other words, gold is more stable than the commodity most subject to geopolitical instability. And there has been a great geopolitical destabilization this year.

Wouldn’t you expect money to be stable, even as war and sanctions and logistics problems and green energy restrictions smash oil this way and that?

Our view is that nonmonetary forces including lockdown and the subsequent unlock-induced whiplash, trade war and tariffs, green energy restrictions, and Ukraine have caused prices to rise.

And, logically, this does not drive up the price of gold.

One should never think of gold as going up or down. Like a lighthouse, viewed from the deck of a storm-tossed ship that’s slowly sinking, it may appear that way. But, actually, gold is stable and it’s the dollar going down and up.

Most people think of the value of the dollar as its purchasing power—the inverse of the consumer price index. A dollar is what it can buy, the thinking goes, as if there are goods inside the dollar. Like there are people inside the TV. When prices rise, many assume it’s the dollar is falling. This is just a circular argument. Prices are measured in money. Money cannot be measured in prices.

War makes goods much scarcer, hence much pricier. Scarcer… pricier... ahah! We can look at prices in gold!

Sure enough, during the time of rising fear about Russia, a barrel of oil went up from 936mg gold to 1,659mg. And as Russia found other channels to get their oil to market, the price fell back to 1,417mg gold (no one would bother calculating prices in bitcoin terms, and as their volatility would be extreme, and hence such prices would be meaningless).

The Dangers of Lending to Uncle Sam

The economy is a mess—in this article, we will avoid the question of whether we are now in a recession. There is a compelling reason to own gold.

When a business borrows money to finance a new factory, it repays the lender from the profits it earns by selling the widgets manufactured in that factory. This is a win-win-win deal. The business owner increases his profits. The lender makes a return on his money. And the consumers benefit from more lower-cost widgets.

But today, an increasing proportion of the debt is being borrowed into existence, not to finance profitable production. It is pouring down every kind of drain, including never-to-be-profitable zombie corporations. And most especially, it is paying for all manner of government welfare programs: to subsidize individuals, businesses, corporations, and municipal governments.

They call it “borrowing” but it is never to be repaid. So it’s not really borrowing. It’s more like Wimpy on the old Popeye cartoon. He says he will “gladly pay you on Tuesday for a hamburger today,” but he lacks the means and intent to repay.

Who, in their right mind, would lend to Wimpy? Wimpy was rather pathetic, and we don’t recall anyone giving him even one hamburger credit.

However, everyone lends to Uncle Sam. If you hold dollars, congratulations—you are a lender to the US government!

We don’t have to ask who would do that. Anyone who understands what happens to creditors of unsound enterprises, with dishonest managers. Anyone who realizes that the dollar is a debt that can never be repaid.

But What Can Gold Really Do?

The next question is: what can you do with the gold? You could polish it, and put it on display in your living room. It is pretty…

We wouldn’t necessarily recommend that. You could hide it under the floorboards. Which might work OK if you own a free-standing house, and don’t tell anyone. But most people will want to deposit larger amounts in a professional vault, where it is insured (you can’t insure it at home).

Which means paying an average of 0.75% per year, just to store it. This is not so attractive, but if you don’t have a choice, then you do what you have to do. Did we mention that the dollar’s manager has stated that its policy is 2% annual debasement?

Now, there is a choice. You can earn 2 to 3% at Monetary Metals, by leasing it to a jeweler, refiner, or other productive business that holds gold inventory or uses gold work-in-progress. And it’s insured.

This is not only a better deal for the gold owner, but it also benefits gold-using businesses by reducing their risk. And it benefits their customers, as they can offer better pricing when their costs and risks are reduced.

Gold owners who are accredited investors can earn higher rates, via Monetary Metals gold bonds. These finance loans to gold miners and other businesses that have a gold income. Our recent gold bond paid 13%.

The path away from the fiat dollar is paved by gold finance of production.