Calibre Mining is a junior producer we have been watching closely. It acquired B2Gold’s non-core assets in Nicaragua (2019), transforming the company into what it is today. It is run by a very competent management team, which has executed its hub-and-spoke strategy (identifying and developing gold deposits and truck the ore to its nearest mine complex). It looks to build on the success it has achieved by identifying and developing new "spoke." It has ample capacity to grow production organically, given the available processing capacity. Since our last report, there have been some exciting developments, including identifying and acquiring new “spokes” to be developed. The hub and spoke strategy allows the company to quickly translate exploration success into production and cash flow with limited process-related capital requirements (only the cost to develop a mine) and no permitting. In other words, Calibre has both characteristics of a producer and exploration company as the drill-bit ("spokes") is crucial to creating shareholder value.

Calibre is focused on Nicaragua, which has is an underexplored country. The management team and Board of Directors have a history of success. Russel Ball (CEO) has worked at Goldcorp and Newmont, serving multiple roles such as CFO, VP of projects and capital management, VP of corporate development and capital projects, and internally in audit, finance, treasury. Darren Hall (COO), Chairman Blayne Johnson, and others in the company worked for and founded Newmarket Gold and its Fosterville gold project. The Newmarket acquisition is the big reason Kirkland Lake Gold has performed so well over the last 5yrs. 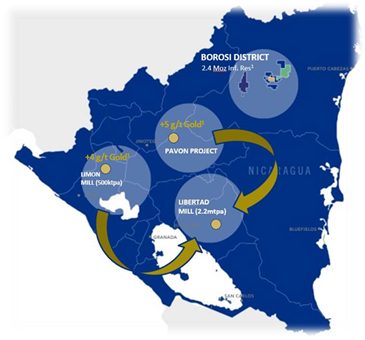 It has two mining complexes, Limon and Libertad. There is limited upside (production-wise) at the Limon Complex. The mill is running at capacity, and the company has identified enough resources to continue production for the next 10yrs. Calibre can add the most value through resource expansion as excess mill feed is trucked to the Libertad Complex, where there is significant excess capacity. There is an opportunity to create value through resource expansion at the Panteon underground, open in several directions and at depth. Operations at Limon consist of a high-grade open-pit and underground mine.

The mill at Limon is the only 500tpd, so there is the potential for this to be expanded in the future, but the company needs to focus on being able to fill the excess capacity at Libertad. Despite the small mill, El Limon contributes at least 50k oz. Au of annual production. Calibre released its 10yr production and cost forecast for the Limon Complex in August. Production is estimated at 50-70k oz. Au @ AISC of $900-$1,100/oz.

The mill has processing capacity of 2.2mtpa, but per the PEA, on average, over the next 5yrs, capacity utilization is only expected to be 33% and 45% over the next 3yrs. It will churn out on average 120k oz. Au from 2021-2023 and 100k oz. Au from 2021-2025 with AISC of $846/oz.; however, this is the base case scenario. The production forecast should be easy to beat (if not obliterate) as it assumes there will be no excess mill feed at Limon beyond 2023 and no resource expansion at Pavon. It excludes a lot of exploration results after year-end 2018, new targets identified through its generative exploration program, and what looks to be the next big "spoke" at Eastern Borosi. An updated MRE will be published over the next few months.

Now that Calibre is in a much stronger financial position, it will increase the size of its drilling programs, which should lead to more material changes in resources going forward.

Libertad mill feed is and will be sourced from excess mill feed from El Limon, mines in and around Libertad, i.e., Jabali pits, Jabali underground, Pavon-Norte, etc., and from the Pavon Project. Eastern Borosi could create significant value for the company by utilizing some of the excess capacity at Libertad. Calibre acquired the remaining 70% interest in the project from Iamgold in August.

Calibre is just as much an exploration play as it is a production play. It owns a highly prospective land package in an under-explored country, Nicaragua. If the company has success with the drill-bit, it will add tremendous value. This base case scenario is already outdated because Calibre has since acquired the remaining interest in the Eastern Borosi Project. Having talked with management, the company envisions incorporating mill feed from Eastern Borosi in the near-medium term. It will likely start relatively small to moderate and increase as more mine development takes place.

Eastern Borosi has Inferred resources of 700k oz. Au @ 4.93 g/t and 11.4m oz. Ag @ 80 g/t. Material exploration upside remains at the project. The majority of the mineralization is underground in addition to a small open-pit resource. Most of the current resource is underground. Organic growth will likely come from Eastern Borosi, Pavon, Panteon underground (open in multiple directions and at depth), Jabali underground (open to the west and at depth). Through its generative exploration program, Calibre has identified three new areas of prospective mineralization within 50km's of Libertad, including Kinuma, Amalia, and Nispero. We will release company updates as exploration results are published.

As we can see in the table above, there is the potential for significant organic production growth over the coming years.

In Q4, Calibre provided an update on its generative exploration program, focused on identifying near-term, organic growth opportunities to complement its hub-and-spoke strategy. The objective is to identify resource expansion opportunities located within trucking distance of the Libertad mining complex. Calibre is doing this through regional and district-scale geological modeling and data analytics, coupled with field reconnaissance and first-pass drill testing, to systematically evaluate its exploration concession's broader potential. The company also applied for new mineral concessions covering another 800km2, which exhibit similar geological characteristics to the bonanza-style epithermal gold systems at Limon, Libertad, and Pavon. Longer-term, Calibre has a JV agreement with Rio Tinto on a large land package.

2021 gold production is in-line with the previously provided 3yr guidance with production forecast at 170-180k oz. Au (30% growth) @ AISC of $1,040-$1,140/oz. Costs are estimated to come down after 2021. Calibre paid off its outstanding debt owed to B2gold as part of the acquisition of Limon and Libertad. It is not building cash, and it will be reinvesting more into exploration and development at Panteon and Astravesda underground mines, which are expected to begin ore deliveries before the end of Q3 in 2021 and 2022. Calibre will also focus on more technical work at Eastern Borosi in 2021.

Assuming a long-term gold price of $1,800/oz. and a 6.50% discount rate, Calibre's NAV/share is approx. $1.65/share. However, this is assuming the base case scenario and assumes there will be no exploration upside.  There is no value applied to Eastern Borosi, its JV project with Rio, and some other assets.

Disclosure: Myself and Other Goldseek employees hold a long position in Calibre. 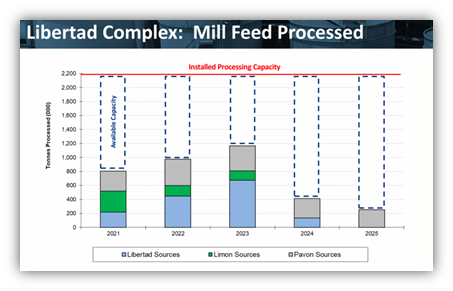