August 16, 2022 Why Gold is a Central Issue in the Proxy NATO Russia War Being Fought in Ukraine
July 15, 2022 During Monetary Crises, Gold or BTC?
April 08, 2022 Will Russia's Decision to Peg the Ruble to Gold Create a "Russian Gold Put"?
March 15, 2022 Will Russian Gold Sanctions Finally Reveal that The Emperor Has No Clothes?
February 25, 2022 Will the Russia Ukraine Conflict Continue to Send Gold and Silver Prices Soaring?

Despite Being Heavily Out of Favor with Fund Managers, India and China Are Quietly Buying Lots of Gold 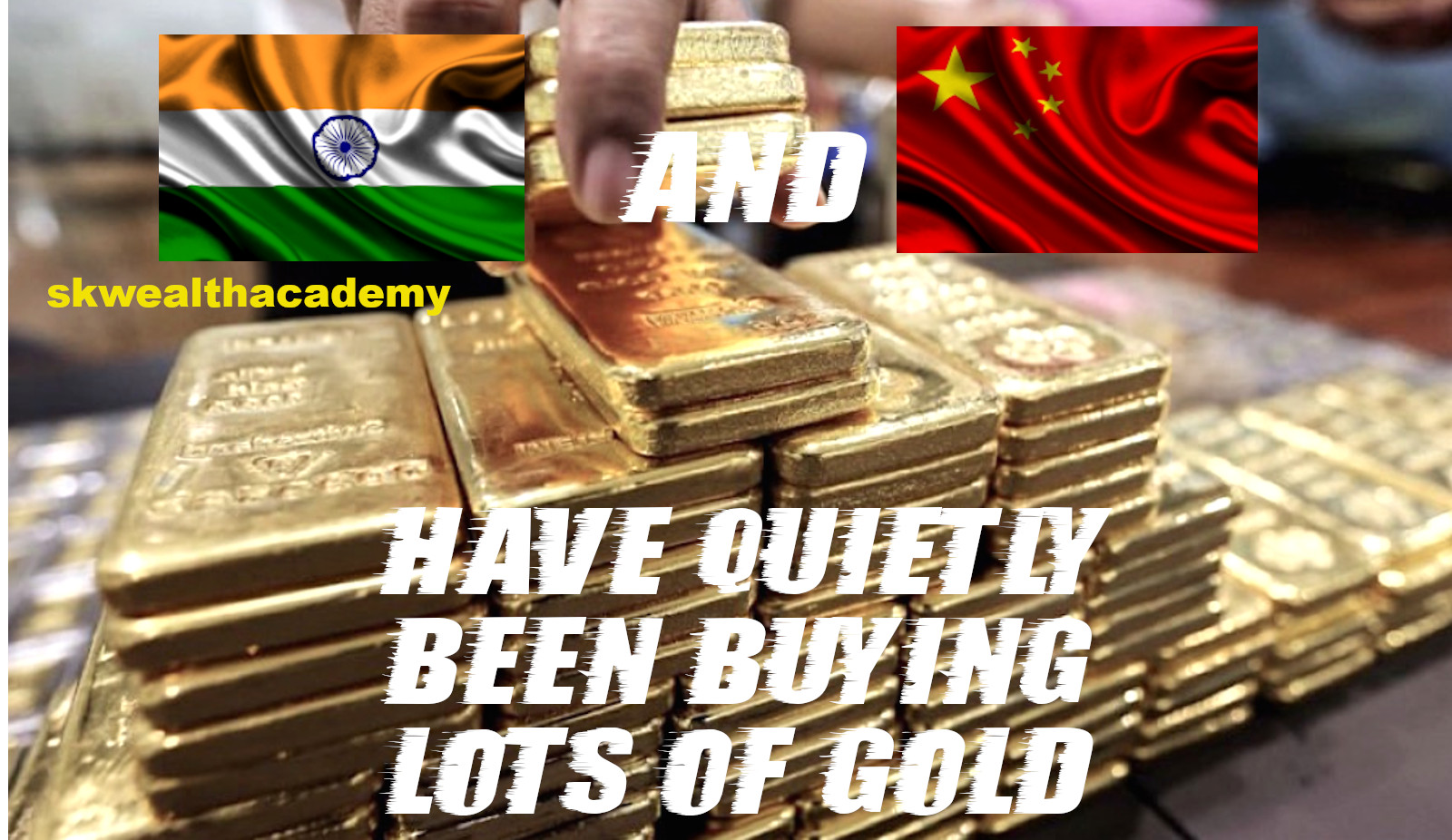 India and China are quietly buying lots of gold

Yes, India and China are quietly buying lots of gold. For those that believe the Western banking narrative that “gold is dead” and that “bitcoin is the new gold”, just look to the behavior of two nations in which 36 out of every 100 citizens of planet Earth reside. Last year, retail consumers in China increased their gold consumption by more than 33% year over year, despite this significant news failing to make the rounds during bitcoin mania that saw two epic collapses from 2021 highs of about $65,000 and $69,000 respectively in April and November before both price highs collapsed by over 50% in relatively quick time. Due to Western banking media focus on cryptocurrencies, especially BTC, specifically designed to divert money away from physical gold purchases, no one reported on the ravenous gold appetites of the two most heavily populated nations in the world.

Unfortunately, the Chinese still don’t fully understand what form of physical gold will be most beneficial to wealth building in the long run, as displayed by their consumption patterns in which gold jewelry consumption jumped yoy by a whopping 711.29 metric tonnes (45%) while gold bars/coins (the better buy) jumped last year by 312.86 metric tonnes (26.87%). Furthermore, conditions are setting up after another year of unimpressive gold price behavior for the price run we’ve all been waiting for, as production output in China in 2021 fell by 10% to 329 tonnes. 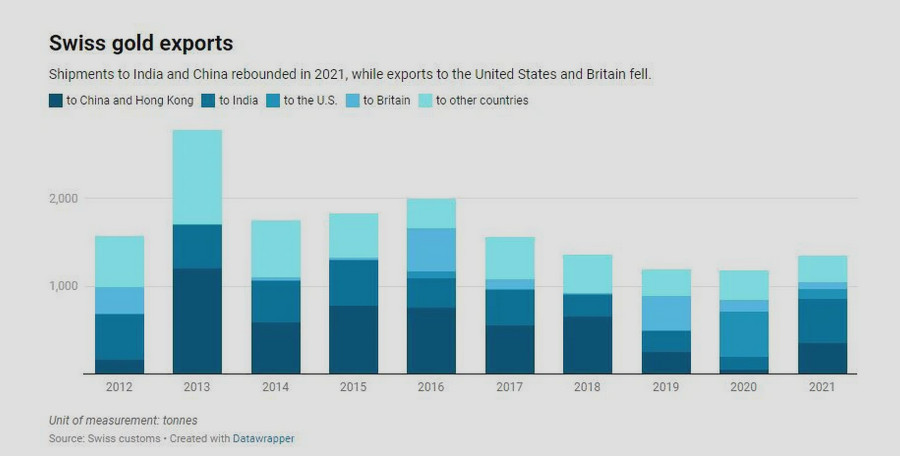 However, as we can see in the Switzerland gold import chart above, China and India once again ramped up their gold imports last year as opposed to England and the US. India increased their imports yoy last year by 359 tonnes to Exports to 507 tonnes, the most since 2015 and more than their average annual imports of 400 tonnes from 2012 to 2019. China increased their Swiss gold imports by 296.5 tonnes yoy to 354 tonnes last year, the highest figure since 2018 though still well under their 600 tonne average import figure from 2012 to 2019 (all figures are combined Hong Kong and mainland China data). However, what should not be ignored in the fog of banking war is that US gold imports from Switzerland in 2020 actually slightly exceeded India gold imports from Switzerland in 2021 (507.5 to 507.2 metric tonnes) despite the US banking cartel publicly denigrating gold every chance they have to do so in the mainstream financial media. That figure clearly demonstrates that the US banking cartel does not think gold is yet “dead” despite their numerous public declarations to this effect. Of the nations in the Americas, only Canada, led by ignorant politicians that have zero understanding of sound money, was dumb enough to dump all their national gold reserves, while the US is still building them as exposed by Swiss gold export data.

However, for the week of 31 January 2022 to 6 February 2022, despite this bullish data from Asia that has been largely undiscussed in the mainstream financial media, I expect gold prices to decline from gold’s current $1800 mark. If you would like to know the reasons I expect a gold price decline, and by what amount, or if topics such as this interest you, then for greater, in-depth analysis, consider joining my patreon platform here. 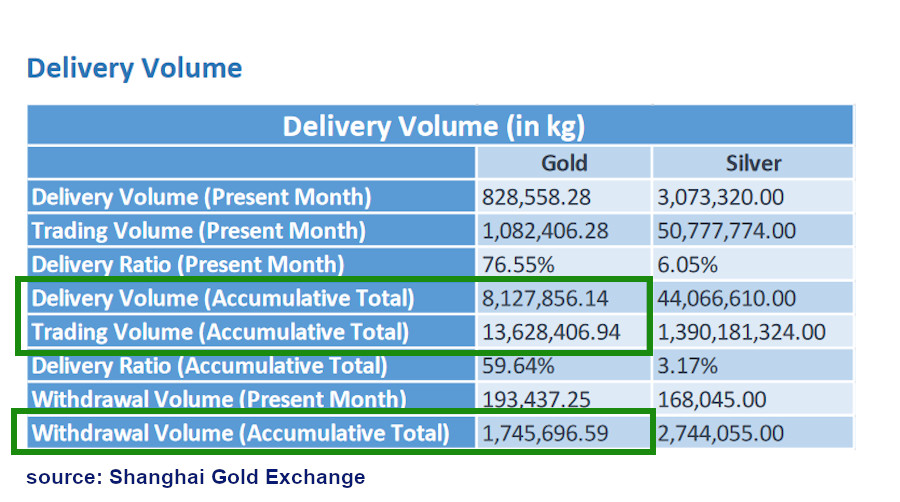 Finally, let’s take a look at the wholesale gold demand in China as reported by the Shanghai Gold Exchange (SGE). Most wholesale gold imported into China and sold in China happens through the SGE (at least the PBOC states this), so if true, SGE data provides good insight into wholesale gold demand annually. Per data provided by the SGE, in 2021, regarding data for physical gold only, 8,127.9 tonnes of gold were delivered, 13,628.4 tonnes were traded, and 1,745.7 tonnes of gold were withdrawn, as compared to the reported (by the WGC) 2021 world gold production of 3,561 tonnes. Furthermore, compare this to the total COMEX registered and pledged inventory of a mere 19.1 tonnes of gold that backs all gold derivatives trading in New York, and it is easy to understand the fraud that is occurring in NY gold futures markets trading.