August 16, 2022 Why Gold is a Central Issue in the Proxy NATO Russia War Being Fought in Ukraine
July 15, 2022 During Monetary Crises, Gold or BTC?
April 08, 2022 Will Russia's Decision to Peg the Ruble to Gold Create a "Russian Gold Put"?
March 15, 2022 Will Russian Gold Sanctions Finally Reveal that The Emperor Has No Clothes?
February 04, 2022 Despite Being Heavily Out of Favor with Fund Managers, India and China Are Quietly Buying Lots of Gold

Will the Russia Ukraine Conflict Continue to Send Gold and Silver Prices Soaring? 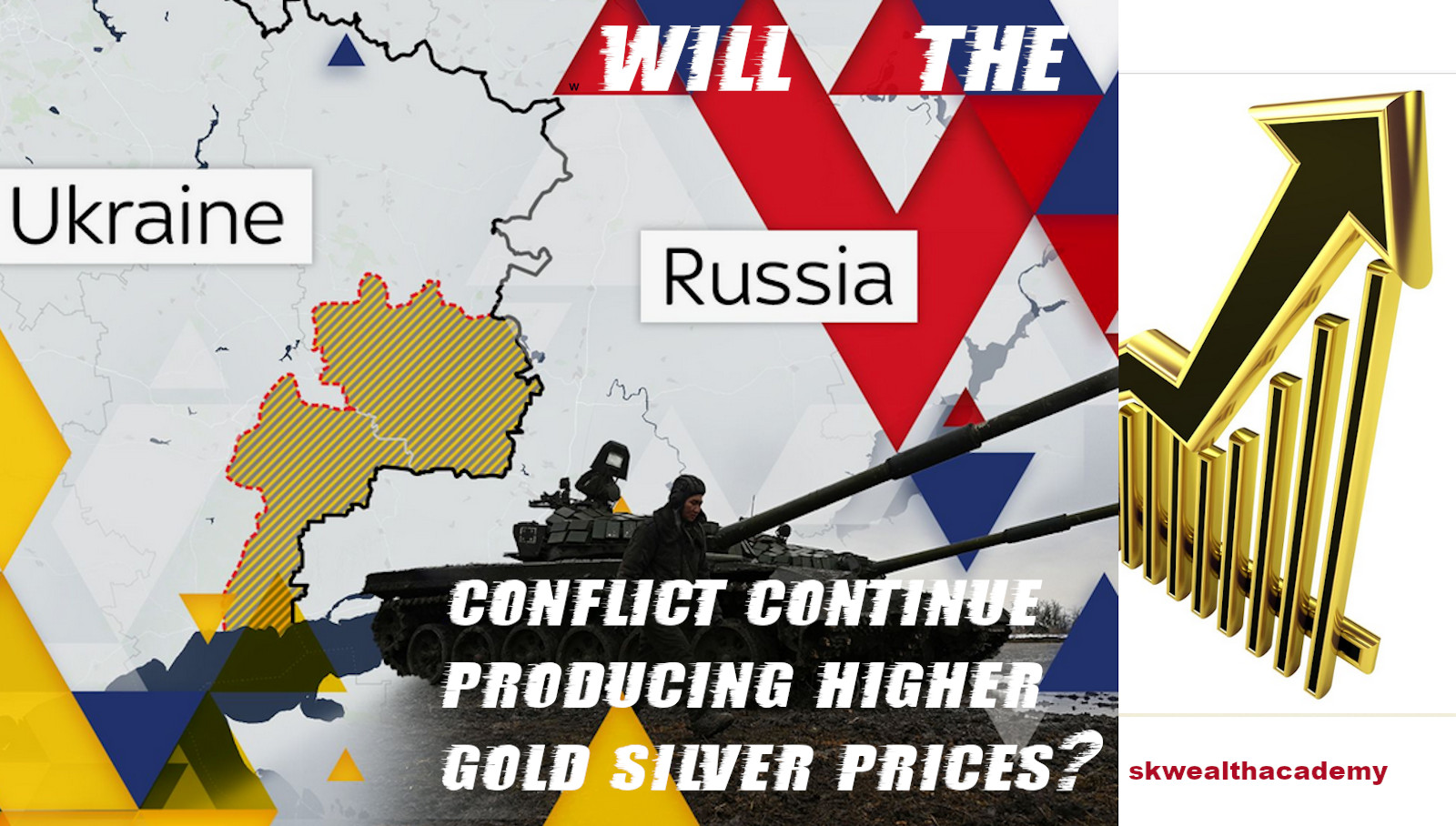 Will the Russia Ukraine conflict continue to send gold and silver prices soaring?

I’ve always stressed throughout my sixteen year analytical career that one must study the pillars of psychology and politics to truly understand the investment world. Currently, we are witnessing just how much politics affects gold and silver prices. If we look through the looking glass back to 2014 when an estimated 21 to 33 tonnes of Ukraine’s gold “disappeared”, with the US and UK being the most likely beneficiaries of this gold heist as I discussed back then on my now defunct YouTube channel, this theft, undertaken in the middle of the night with zero Ukrainian military resistance, and perhaps even the help of the Ukrainian military, proved that the US had already installed a pro-US government puppet regime. Back then this unconfirmed story was reported on multiple independent media outlets:

Tonight, around at 2:00 am, an unregistered transport plane took off took off from Boryspil airport. According to Boryspil staff, prior to the plane’s appearance, four trucks and two cargo minibuses arrived at the airport all with their license plates missing. Fifteen people in black uniforms, masks and body armor stepped out, some armed with machine guns. These people loaded the plane with more than forty heavy boxes. After this, several mysterious men arrived and also entered the plane. The loading was carried out in a hurry. After unloading, the plateless cars immediately left the runway, and the plane took off on an emergency basis.

Furthermore, independent media sources reported that the gold heist was approved by the new US puppet regime that had just been installed in Ukraine. Of course, no official confirmation of the above story occurred for weeks, with the mass media dismissing the story, as usual, as a “conspiracy”. However,  not long thereafter, the head of the Ukraine Central Bank, Valeria Gontareva, in an interview with Ukraine’s Kharkiv TV. publicly confirmed the gold heist: “in the vaults of the central bank there is almost no gold left. There is a small amount of gold bullion left, but it’s just 1% of reserves.”

This is important to understand to provide context to the situation today. Has there been unwarranted Russian aggression towards Ukraine historically or has Russian aggression towards Ukraine been triggered by Western meddling in Ukraine and Crimea?  Though I don’t want to veer too much off topic in this article, and will reserve a deeper inspection of the above question in a future article, Zbigniew Brzezinski, one of the most influential policy advisors throughout multiple US administrations, stated in his 1997 book, The Grand Chessboard, that “Ukraine is a geopolitical pivot. Without Ukraine, Russia ceases to be a Eurasian empire.” Brzezinski further made it clear that Ukraine must become a focal point of US policy by stating that it was necessary to bring Ukraine into NATO by 2010, a policy point the US is still pursuing today and that has become a major source of conflict with Russia.

However, for now, let’s focus on how the perception of a long, extended war between Ukraine and Russia has caused all gold/silver assets to rise in unison in recent days (with the exception of mining stock prices of companies operating in Russia). And even though silver futures prices have fallen 3.55% and gold is down $52 an ounce, at $1,922, from earlier highs today as I type this sentence (at 11:51 EST, 24/02/22), this temporary decline in prices is merely a product of the fact that today is gold and silver futures-ex day and nothing more. I would expect, after the next few trading days pass, that PM mining stock prices continue their procession higher as long as media continues to forward the perception that the Russia-Ukraine situation will remain in elevated crisis status.

Also note that I use the word “perception”. Even though I will attempt to separate the propaganda being widely promoted by the mass media regarding the Russia-Ukraine conflict from the facts in a future article in my “Connect the Dots” series that will be published on my substack newsletter in coming weeks, for the sake of this article, the reality of the conflict, widely misunderstood by most, is irrelevant to this article, for perception, not reality, always controls asset prices in the immediate term.

Knowledge of this immutable financial law enabled me to issue this warning about bitcoin and ether prices just nine days ago that has already come true. Thus, allow me to issue this warning about the rise in gold and silver mining share prices. This present rise will only continue if the perception continues to be promoted in the mass media of escalating and continuing tensions in the Russia-Ukraine conflict. As long as this perception is promoted, regardless of reality, gold and silver mining share prices will continue to rise, despite the setback in gold and silver futures prices I discussed above.

However, should the mass media stops promoting this perception, then this would allow for the anti-gold banking cartel to once again exert the normal heavily influence over gold/silver asset prices that they have temporarily lost. And should this happen, I expect a reversal of PM mining share prices as well.  For now, I am neither predicting a reversal in trend of PM mining prices or an imminent reversal in the mass media narrative of the Russia-Ukraine conflict, as long as gold/silver future prices and gold/silver mining stocks can make it through the next several trading days relatively unscathed (I’ve witnessed too many heavy attacks during the end of the month/start of the next month to completely rule out this possibility).

At the present time, it is impossible to find a dissenting narrative in all of Western mass media, though a few dissenting opinions that Putin does not want war in Ukraine have surfaced only on independent media sites. Consequently, I would interpret the heavy vesting in the mass media narrative of Russia as the aggressor against Ukranian “democracy” (though no political analyst worth his weight in salt would ever accept such a simple explanation to a far more complex situation with a multi-decade timeline) to mean no imminent “surprise” reversal of this narrative will occur.

However, given the progression of US/UK negotiations with Russia in this conflict, should the time arrive for a reversal of the above narrative, or should the banking cartel become too uncomfortable with the current price rise that they need to implement other tools in their toolbox to suppress gold and silver prices (i.e. raising initial margins in the futures markets), the time will arrive to exhibit more caution with gold/silver assets.

Please help us combat censorship by bookmarking and visiting/joining my other platforms: For those that would like similar, but much more in-depth analysis based upon my relentless pursuit of truth over mainstream financial propaganda, consider supporting me on the following platforms. All my content is 100% reader supported and writing of such articles would not be possible without reader support. To understand why I’m asking for your support if you are able to support me, due to relentless demonetization, shadowbanning and censorship, I literally earned less than $10.00 in advertising fees in total in seven years of posting videos to the YouTube platform on two channels that racked up more than 13,5 million views. For anyone that has financially benefited from the investment tips I’ve provided that have yielded large gains that wish to support me, the easiest way to do so is by visiting my gofundme campaign here. You may also join my substack newsletter for absolutely free right now by clicking here. For investment analysis and tips every week and month (including the identity of nine stocks I suggested buying less than six months ago that yielded on average, about 113% per stock upon my guidance to divest, and which will likely yield similar results in the very near future with a little patience), join my patreon platform here(only few spots remain at the benefactor level, after which memberships will close). Subscribe for free to watch my investment videos here. Finally, to download a fact sheet to learn how my soon-to-be-launched Academy will radically alter business education forever, click here.