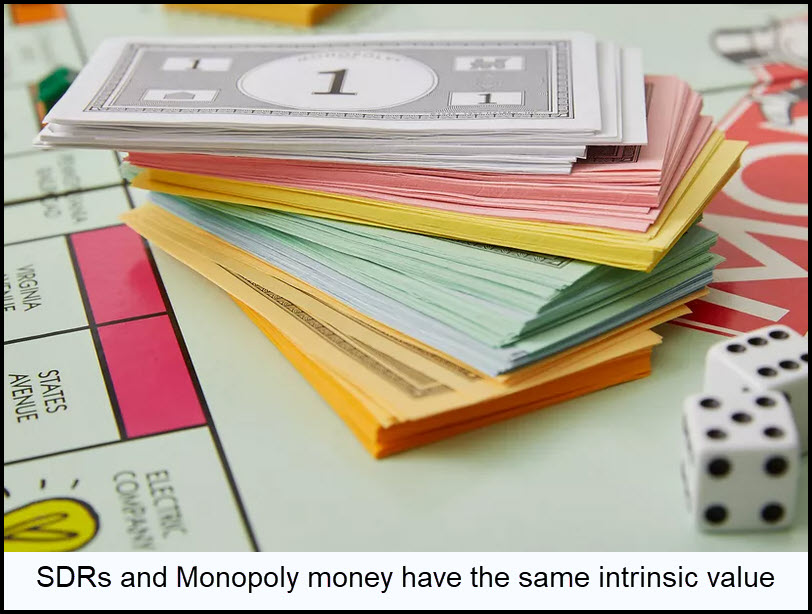 The latest attempt to move the global economy away from the dollar’s dominance involves a plan by Biden to issue $650 billion of Special Drawing Rights (SDRs) through the IMF. Ardent fans of the greenback needn't worry, however, since this sum, as large as it seems, is just a drop in the bucket compared to a derivatives market that supplies more than $2 quadrillion to the world’s biggest financial players. The dollar is the only currency big enough to handle their action, which dwarfs global trade in actual goods and services of no more than $90 trillion. Under the circumstances, it’s unlikely the dollar will be replaced any time soon.

The $650 billion supposedly will enhance global liquidity, as though more liquidity were needed in a world where financiers can borrow practically unlimited quantities of money for next to nothing.  China’s communist government is backing the SDR expansion, although for reasons that are doubtless different from Biden’s. One suspects that globalists have Biden’s ear and that he is unwittingly going along with them because, well, because he was witless to begin with. For its part, China undoubtedly thinks more funny-money loosed in the ether can only be a good thing, since the CCP's main enterprise these days is helping poor countries go deeper into hock for Belt & Road projects.


Pinto Beans for the Poor

The SDR initiative is being touted as a way to make the world more "green" and "sustainable," which is another way of saying that anyone who opposes it is trying to make life even more miserable for the poor. Arguably, they will in fact be better off, since even if $600 billion of Biden’s giveaway goes toward purchasing fleets of Bentleys and sumptuous vacation homes for Third World dictators, the $50 billion that eventually trickles down will still buy a lot of pinto beans, Monsanto seed, prescription drugs and sacks of cement.

Meanwhile, Biden and his commie friends can gin up as many SDRs as they want and it’s not going to change things significantly. Think of it as a game of Monopoly in which a splinter group called Park Place LLP is formed to generate side-action with $1,000 worth of scrip. That’s only about 5% of what the official bank holds, but because it is not nearly as leverageable or fungible as "real" Monopoly dollars, the partners will eventually fritter away their "SDRs" paying hotel rents, utility bills and jail fines. Similarly, players who are dealt Biden SDRs will be constrained from multiplying them in the way a single real dollar magically becomes 50.

To avoid having to write another commentary about why the dollar is here to stay, let me address an idiotic theory that frequently resurfaces  – i.e., that America’s energy-producing enemies will gang up on the greenback by demanding payment in other currencies. The simple fact is, the world is perfectly happy paying for something as valuable and useful as oil with a currency that is in almost infinite supply. If Russia, Iran or OPEC were to demand payment in hard money – gold bullion, for instance -- sales would quickly drop to zero. End of argument.