Fed’s Inflation Fight Is All Bark, No Bite

“Looking at the stock market is an important price signal – as many others are – to watch and see. This is a time of uncertainty. It’s been a rough week in the equity markets. What we are looking for is the transmission of our policy through markets’ understanding, and that tightening should be expected. It is one of the avenues through which tighter financial conditions will emerge.”

Translate George’s Fedspeak to plain English, and it appears the central planners are willing to accept lower asset prices in order to control inflation. 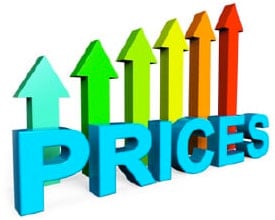 The CNBC reporter and the rest of the corporate press seem happy to accept whatever George and the other wizards at the Fed say without question. More critical thinkers have questions.

Are George and other Fed officials lying about wanting to control price inflation?

Rising prices are a massive problem for most Americans. Politicians are feeling plenty of heat over the issue.

No doubt Biden administration officials are urging the Fed to assure Americans their central bank is taking decisive action. So far, however, there isn’t much reason to believe George and her comrades are planning to do much more than talk.

April’s half percent rate hike in the Fed funds rate has been played up as bold because it was double the usual increment. Yet the country is now experiencing 1980 levels of inflation, and thus far Fed officials have only jacked up the funds rate to 1.0%. The response four decades ago was to hike the funds rate to 20%.

Absolutely no one at the Fed (or anywhere else) is even talking about that kind of action. That is probably because our debt- and stimulus-addicted economy would likely implode before officials even got to 5%.

Only if Jerome Powell and the FOMC were to emulate Fed Chair Paul Volcker can Americans know for sure they are serious about reining in the inflation they created.

Until then, it is safer to assume official talk cannot be trusted. After all, these people hardly have Volcker’s courage or credibility.

They lie routinely, and they are often wrong. For example, most recently, Americans were told inflation was merely “transitory.”

In reality, sky-rocketing prices might just be part of a plan.

The nation is grappling with the mother of all debt bubbles. Public debt across all levels of government, unfunded liabilities, corporate debt and consumer debt is far beyond the ability of the nation to cover. Some form of default is inevitable.

The question has always been whether the Fed will permit an outright default or orchestrate a default through inflation. Many, including us, have long expected officials will do the latter. They will attempt to print money and devalue the nominal mountain of debt until it looks more like a molehill.

The ability to do that is one of the features that politicians and central bankers love about fiat currency throughout history.

Americans aren’t loving inflation now that it has moved out of asset prices and into the real economy.

That’s why the strategy is always for those behind the inflationary fiscal and monetary policy to blame anyone, or anything, else. Have you heard Biden blame “Putin’s War” in Ukraine for making gas and food unaffordable?

The opportunity to mislead the public about who is responsible makes a default through inflation more palatable politically than a direct default, i.e. telling bond holders and Social Security recipients they are simply out of luck. It’s hard to dodge blame when folks suddenly stop getting the checks they were promised.

What’s more, Wall Street lenders just might survive inflation. They probably wouldn’t survive mass defaults. And if there is any certainty in this uncertain world, it is that the Fed will look out for the banks.

The FOMC has hiked rates just 0.75%. The equity markets are down nearly 20%. The markets could be down 40% by the time they deliver the next 75 basis point increase, giving the Fed plenty of cover to reverse course.