1 hour 43 minutes ago
Revisiting An Old Premise
2 days 2 hours ago
GoldSeek Radio Nugget -- Patrick Yip: "OneGold, the Robinhood for PMs"
2 days 4 hours ago
Was That a False Breakdown in Silver?
3 days 5 hours ago
Silver Update Video: Bullish news for Silver this week as China..
3 days 10 hours ago
The Silver Chart THEY Don’t Want You to See!

Gold and Silver continue to trade in a range, with gold holding unable to break the $1,850/oz. resistance level while support looks strong around the $1,770/oz. I would expect gold to be rangebound the year, trading between $1,780-$1,850/oz. The mining stocks are still trading at fire-sale prices with tax-loss selling, adding some downward pressure. Now is the time to initiated or add to positions as the fundamentals have never been this strong. This may be the last great opportunity. While prices are certainly a lot higher relative to March of this year, quality mining stocks, especially junior exploration companies are trading at extremely lucrative prices.

AbraPlata: Reported additional high-grade silver, gold, and copper mineralization, including its best intercept to date at the Oculto deposit at its Diablillos project in Argentina. Highlights include: 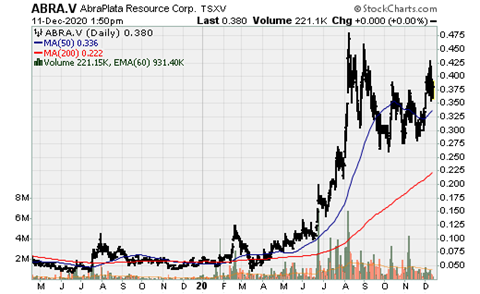 Alamos Gold: The North-American and Canada focused mid-tier gold producer is set to see several years of operational improvement, highlighted by growing production and lower costs. The company provided 2021 and long-term production and cost guidance. 2021 production is expected to increase approx. 17%, driven by higher output from Young-Davidson with the recent lower mine expansion. 2021 Guidance: 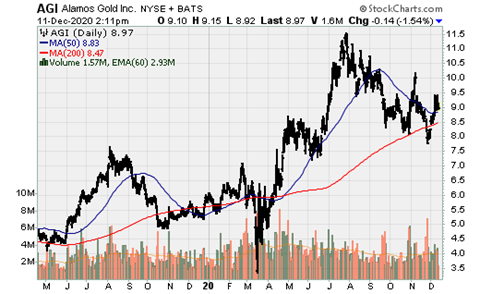 America's Gold & Silver: Announced its large radial stacker has returned to service at Relief Canyon. This will allow ore placement to return to the targeted rate of approx. 16,000 tons per day from the current rate of approximately 8,000 tons per day. The stacker suffered a structural failure in late May, which required extensive repair work to be completed off-site. The repaired unit was tested before delivery for several weeks by the fabricator, which included software upgrades to improve operator efficiency. While this led to a slight delay in receiving the unit, the Company expects this will benefit the operation longer-term. The Company anticipates commercial production will be reached at the end of Q4-2020 with full production by the end of April 2021, setting the Company up for a strong 2021. If the company can execute on its three big potential catalysts (ramping up Relief Canyon and achieving feasibility levels of production and costs, development of the EC120 zone in Mexico, and successfully ramp-up operations at its 60% Galena Complex when the recapitalization plan is complete), it will see multiple market re-rates. 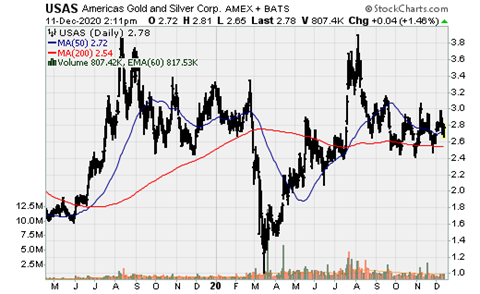 First Majestic Silver: Announced the initiation of its inaugural dividend, beginning after Q1 2021. This should bring in more interest in the company, and the stock price should move higher; however, the ongoing tax dispute with the Mexican government remains an overhang on the stock price. This also explains why more than 20% of the shares outstanding are held short. Should the company resolve this in a relatively timely manner, it will likely cause a short squeeze, and we could see a quick 30-40%+ run-up in the stock price. The dividend will be equivalent to 1% of the net revenues generated by the company. 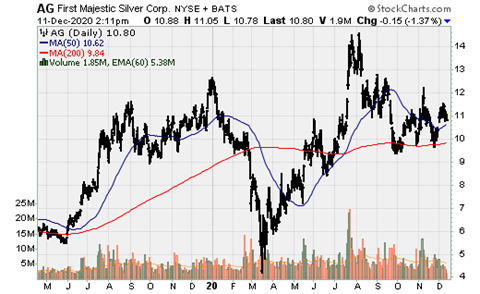 Great Bear Resources: Announced more exploration results from its ongoing $21m exploration program. The company has begun to engage in deep drilling with the second-deep drill hole, more than doubling the depth of the Hinge zone to over 850m (vertical). This once again illustrates the expansion potential at Dixie Lake, this time at depth. Drill highlights: 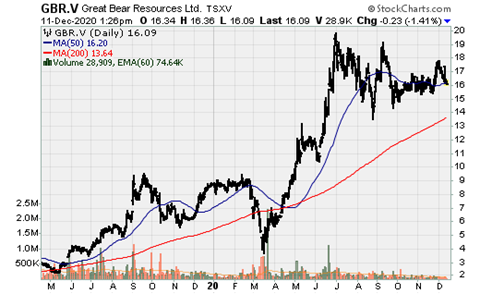 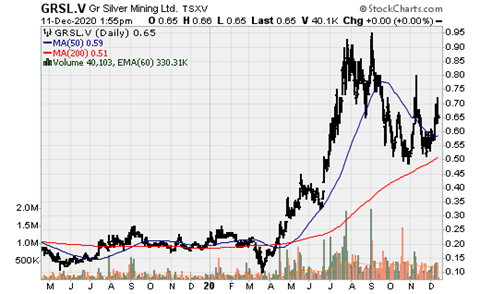 Kirkland Lake Gold: The company announced its three-year production guidance. While it will see a step down in production vs. 2020 (assuming 2020 had a full year of Detour Lake and no disruptions to production form CV19). But this was expected as grades at Fosterville will fall quite a bit. This will more than be made up for increased production at Detour, which is expected to achieve 800k oz. Au p.a. in 2025 and completion of the expansion at Macassa. 2021 Guidance and mine by mine breakdown:

Costs in 2021 will be in the same range as 2020 @ AISC of $790-$810/oz. Costs at Detour lake and Macassa are both expected to fall, $900/oz. at Detour and $750/oz. at Macassa. Costs at Fosterville will increase, negating lower costs at its other assets. Beyond that, I would think AISC will remain flat or trend down a bit as Detour Lake will see costs come down a bit in 2024/2025 and at Macassa in 2023/2024, with higher costs at Fosterville unless the company can maintain higher output. 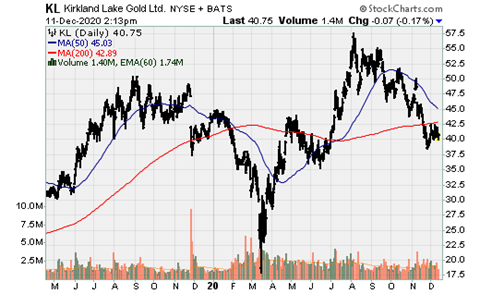 Lundin Gold: Announced 2021 production guidance of 380-420k oz. Au and a 20% mine and mill expansion. With an 8% increase in reserves, average annual gold production is now expected to average 345k oz. per year, up from 325k oz. The expansion will increase throughput from 3.5ktpd to 4.2ktpd. Throughput will average 3.5tpd over the first nine months of 2021, ramping up to 4.2ktpd in Q4. 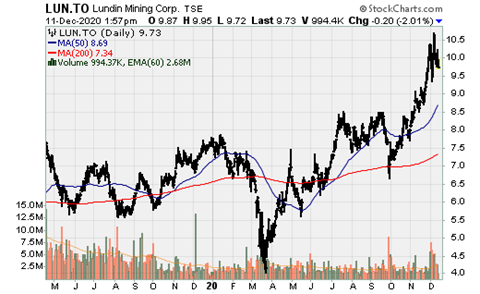 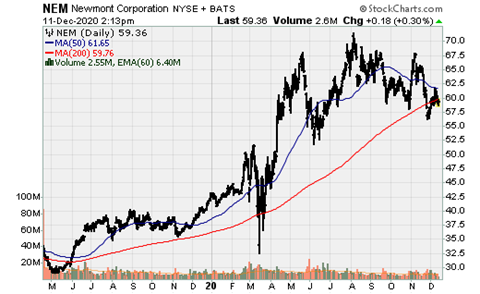 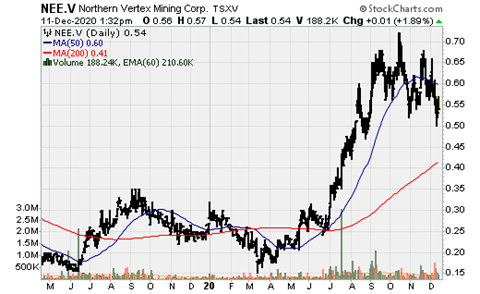 Osisko Development: Due to significant demand, the company once again upsized its previously announced private placement (first C$10m, then C$50m, now C$80m). The underwriters can purchase up to an additional 600k units for C$4.5m. This is very encouraging, and we have high hopes for this near-term producer, which will commence construction at its flagship asset in 2022, in addition to having two smaller producing mines by year-end 2021. Together with the financing raised in its IPO and the value of its equity portfolio (vended in by Osisko Gold Royalties along with Cariboo, San Antonio, and some earlier stage exploration assets), the company is extremely well-financed. The Osisko group of families is ideally positioned to benefit from rising precious and base metal prices.

Victoria Gold: The company reports excellent drill results on its Dublin Gulch property in the Yukon. This very encouraging as it is the first exploration results from Lynx, one of several targets along the Potato Hills Trend. The primary focus of exploration has been (and still is) the Raven target, so this is much-welcomed news for the newest gold producer in Canada. Highlights include:

The Lynx targets exhibits similar chrematistics to its other exploration focus areas, Nugget and Raven. 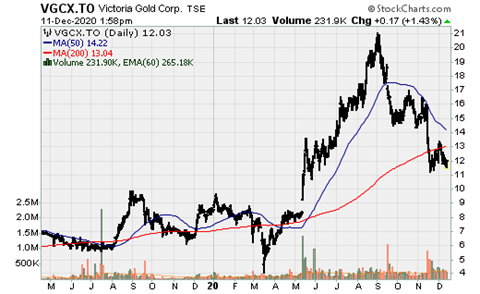 Wesdome Gold Mines: The company announced continued high-grade value from 311 West and 300 East zone at its Eagle River mine. Highlights include: 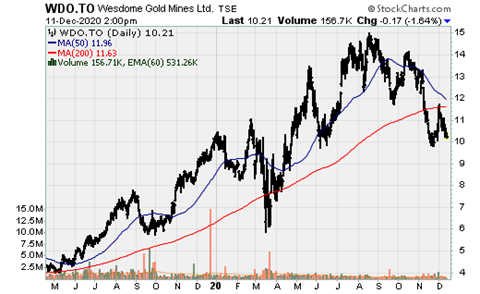 Wheaton Precious Metals: Following the recent closure of the Marmato precious metals stream in Colombia, the company announced it would acquire a 50% silver stream on Capstone's Cozamin mine. Wheaton Precious Metals will pay Capstone $150m for a 50% silver stream until 10m oz. Ag has been delivered, dropping to 33% thereafter, with ongoing per ounce payments equal to 10% of the spot price. While this is a smaller stream, immediately increasing attributable production (beginning December 1st, 2020), with average attributable production will be 820k oz. Ag or 11k oz. AuEq (using a 75:1 GSR and 12.6k oz. AuEq using a 65:1 GSR). Further to this, both parties said they are in advanced stage talks for a potential gold stream on Capstone's Santo Domingo project. 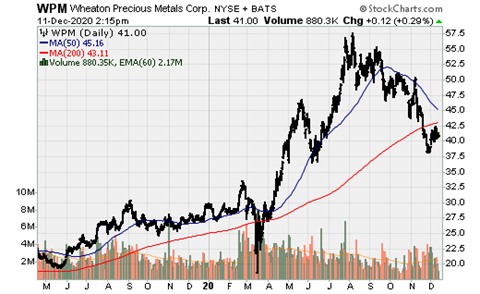