Gold Seeker Report #30: This Week in Mining: Multiple Catalysts on The Horizon

With another week of consolidation in the books, it is looking increasingly likely we will see a break soon. Whether this is to the upside or downside remains to be seen. If it is to the downside, it will be short-lived and could present the last opportunity before the train really leaves the station. Beyond the very-short term, precious metal prices are headed higher, much higher.

There are a number of potential catalysts for the price of precious metals over the coming months including the US election, likely additional QE measures to be undertaken by the Fed, another stimulus bill, which could be very significant, and of course the inflationary measures that other countries will be implementing.

Note: We have launched the Goldseeker subscription service and will keep introductory pricing for the next 6 or so weeks. You get a 30-day trial period to decide whether this service benefits you and your investing needs. If not, sign up for our free letter @ Goldseeker.com.

America’s Gold & Silver: Provided an update regarding the ramp-up of its flagship asset, Relief Canyon. After placing ore on the 6W leach pad in early August, leach solution grade from the pad has increased substantially. This should continue and improve the consistency of the heap performance and reduce operating costs. The company is still targeting Q4 for commercial production to be achieved. There have been some start-up issues at Relief Canyon but it looks as if things are getting back on track. 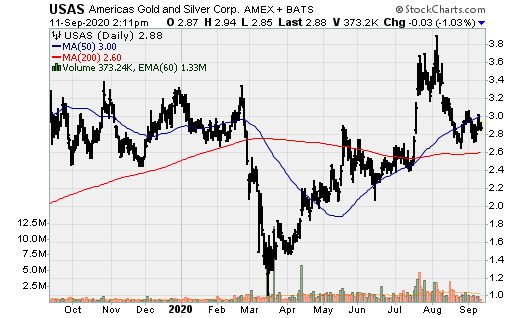 B2Gold: The company has successfully commissioned the mill expansion at its flagship Fekola mine to 7.5mtpa, roughly 4 weeks ahead of schedule. There remains minor construction work to be completed, which is expected over the next 10 or so days. 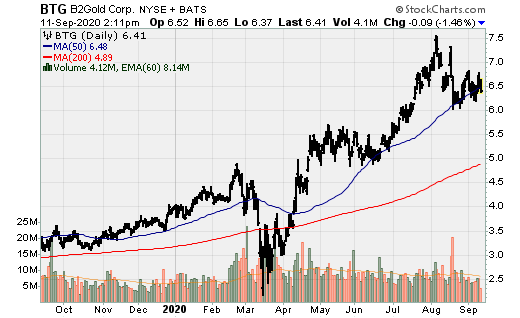 Great Bear Resources: Reported more results from its $21m exploration program at its high-grade Dixie project (and regional exploration at its Sobel property, which is also located in Red Lake). Dixie project highlights include: Drilling continues to define gold mineralization on 50m centers along 5km’s of strike length of the LP Fault, to a vertical depth of approximately 500 meters.  All of the 161 LP Fault drill holes completed to date have successfully intersected the structure and gold mineralization. New results include: 37.70m @ 8.08 g/t Au, 78.75m @ 5.23 g/t Au, 3.25m @ 68 g/t Au, and 2.15m @ 60 g/t Au. 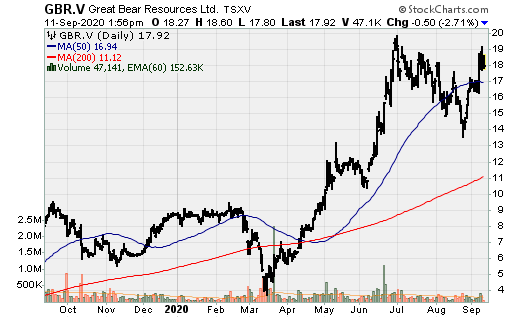 HighGold Mining: Reported the results from the first two drill holes of an on-going 15,000m drill program at its Johnson Tract Gold project in Alaska. Wide intervals of high-grade mineralization were intersected in both holes. These include: 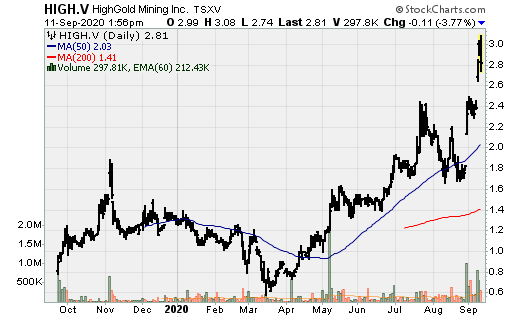 Kirkland Lake Gold: Drilling at the Detour Lake in the central portion of the Saddle zone has returned additional high-grade intersections. This confirms continuity between the Main and West pits. The key intercept was 142m @ 1.10 g/t Au.  Kirkland also drilled in the west portion of Saddle zone, which intersected mineralization up to 420m below the West pit. The key intercepts include: 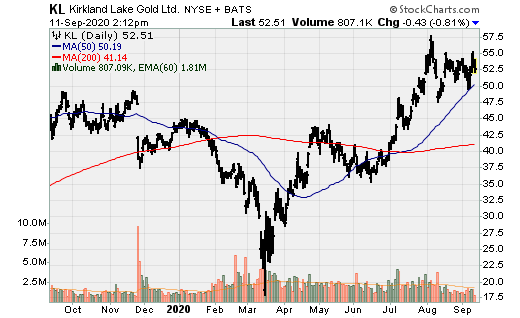 Liberty Gold: More encouraging drill results continue to role in from the company at it Black Pine project. The company continues to intersect high-grade oxide gold in the D-3 zone at Black Pine including: 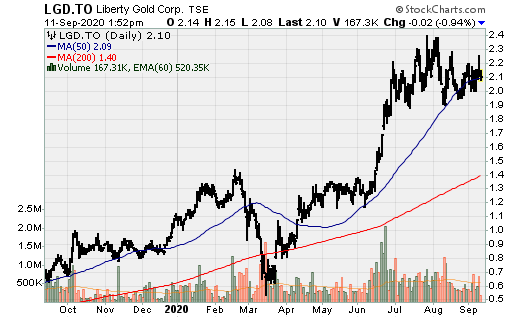 MAG Silver: The company announced an agreement to acquire 100% of the consolidated silver-rich Deer Trail Project in Utah with Phase I drilling to commence in October. Now that Juanicipio has reached first production (although the mill won’t be commissioned until mid-2021), it has begun to look to the future. It already has a project in the pipeline at Cinco de Mayo but this adds some diversity outside of Mexico and given the chief exploration officer (Dr. Peter Megaw) is the pre-eminent expert on CRD deposits, there is a high probability he sees high potential with this project. With the consolidation, MAG will apply an integrated district-scale approach based on the range of mineralization styles from CRD through Skarn and Porphyry copper-molybdenum shown by many related systems worldwide. This model suggests that the high-grade Ag, Au, Pb, Zn, and Cu sulfides on the Deer trail are linked by kilometers of continuous mineralization to a Porphyry Cu-Mo center. 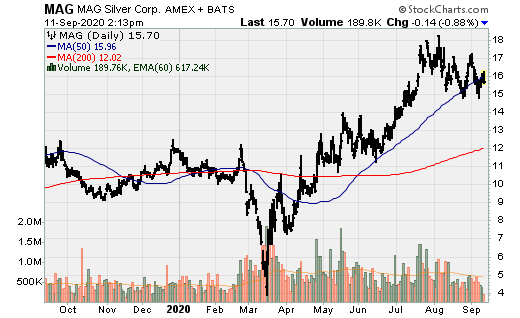 Moneta Porcupine: After spending a pro-longed period of time drilling the Golden Highway project in Timmins, the company announced the results from the preliminary economic assessment (PEA) on the South West deposit. While the economics are solid at a $1,500/oz. gold price, this is a project that likely wouldn’t be advanced if gold was still in the $1,200-$1,300/oz. trading range. The NPV5% of the project at $1,500/oz. is US$181m with an IRR of 30%. Average annual output based on the PEA would be 75.7k oz. Au, and 719k oz. Au of total production. Cash costs and AISC are low at $590/oz. and $750/oz. At today’s gold prices ($1,900/oz), the NPV5% and IRR increase to $325m and 47%. Initial capital costs are reasonable at $111m. The company could choose a low-capex development scenario with the use of toll milling, however, the NPV5% falls to $152m but initial capital investment requirements also falls to just $50m. 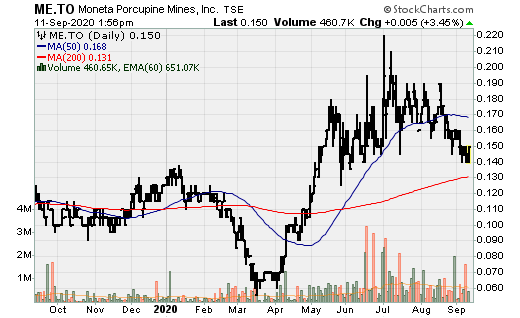 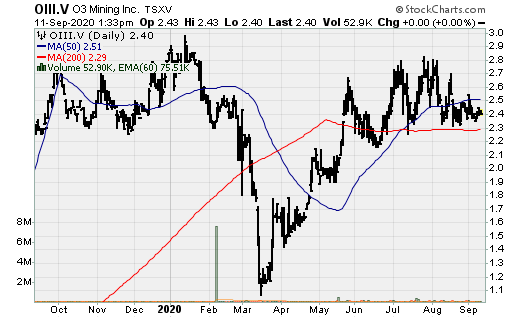 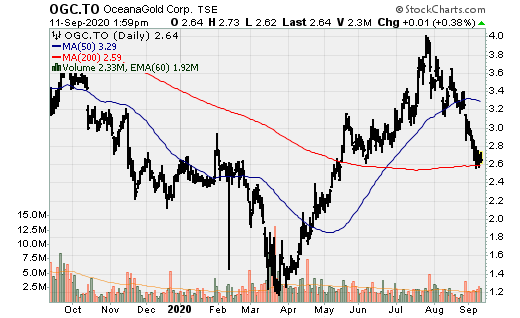 Roxgold: The company continues to expand mineralization and make new discoveries at its flagship development project, Seguela. This press release was highlighted by 19m @ 26.1 g/t Au and 12m @ 32 g/t Au at the Koula Prospect (new discovery). Other drill highlights include: 8m @ 14.8 g/t Au and 12m @ 4.7 g/t Au. It is expected that feasibility study will be complete in 1H 2021, followed shortly by a construction decision. I can’t imagine a case where the company doesn’t give this project the go-ahead. 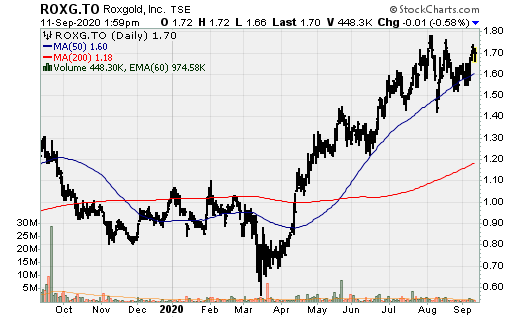 Skeena Resources: The company continues to advanced the past producing, high-grade Eskay Creek project. Skeena announced new gold-silver assay results from the 2020 Phase I surface drilling. Six drill rigs are currently active for the Phase I program in the 21A, 21B, and 21C for the PFS resource conversion. The PEA was excellent and outlined a very robust project, which I can only imagine improved given the significant exploration success since then. Drill highlights in this new release include: 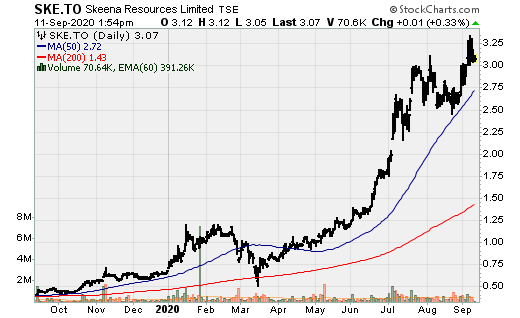 Wallbridge Mining: Greatly expanded the potential size of the Fenelon gold system as initial drilling on its recent acquisition of Balmoral has been thus-far successful. Drilling has extended gold mineralization 500m to the west and 850m to the south of Area 51. This is significant and the potential size of the Area 51 vein network. The Area 51 vein network, along with Tabasco, Cayenne, and Gabbro zones, for parts of a larger gold system, which has been traced over 1.8km’s. Highlights include: 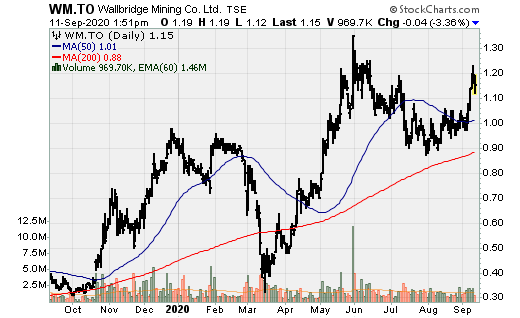 Yamana Gold: The company announced an exploration update at Minera Florida, El Penon, and Jacobina. At Minera Florida, more discoveries were made including La Flor Oeste and Bandolera, which illustrated the presence of a wider and underexplored mineralization footprint. Drill results in the new production areas of the mine (Patagua and Don Leopoldo) continue to expand these areas along strike and down-dip, which remain open in both directions. In all likelihood and with continued exploration success, the mine life is likely to be 10+ years.

At El Penon, exploration has demonstrated the extension potential of many areas including Pampa Campamento, Martillo Flat, and El Valle, while also discovering new veins and mineralized structures in the core mine. Drilling at Pampa Campamento successfully extended the southern mineralized zone on deeper levels, where a drill hole returned 24.01 g/t Au and 233.8 g/t Ag over 2.8 meters estimated true width, indicating the continuity of mineralization down dip. At El Valle, the delineation drilling program intercepted wider mineralized intervals and defined the mineral envelope continuity along strike with expansion potential. Exploration generated additional discoveries and new mineralized structures, with the definition of Quebrada Colorada Sur, a recently discovered vein system located in the south continuation of the historically productive Colorada structure. This will likely lead to increased output and/or mine life as the El Penon plant is currently operating below capacity (4.2ktpd) at 3.3ktpd. Over the next year or two years, production should increase given the excess mill capacity. 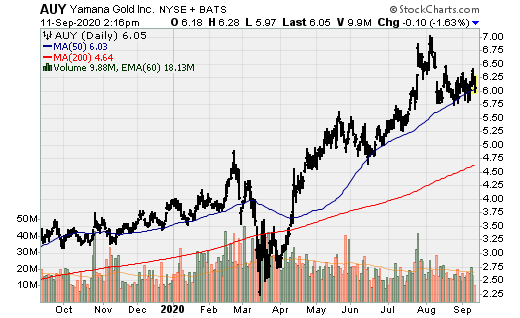