2 hours 25 minutes ago
Revisiting An Old Premise
2 days 3 hours ago
GoldSeek Radio Nugget -- Patrick Yip: "OneGold, the Robinhood for PMs"
2 days 4 hours ago
Was That a False Breakdown in Silver?
3 days 5 hours ago
Silver Update Video: Bullish news for Silver this week as China..
3 days 11 hours ago
The Silver Chart THEY Don’t Want You to See!

Gold Seeker Report Issue #42 ~This Week in Mining: Gold Bounces off Support, What Next?

Gold and Silver finally got some relief this week after roughly 2-months of grinding lower. The bounce off the 50% Fibonacci retracement for gold is encouraging, but that doesn't mean selling into year-end is over. There is always the chance of moving lower; time will tell. Silver's chart is looking better, but we aren't out of the woods yet. I expect gold to trade in a range through year-end. If we assume the rally started at $1,350/oz (in June 2019) or March 2020 ( approx. $1,480/oz.):

News this week was very light as we entered a period of lesser news-flow due to the holidays. This should continue until mid-January or so.

At Goldseeker.com, we've been building positions in two new companies and published company reports and appraisals for subscribers over the last two weeks. Subscribers on our free email list will be receiving coverage of a late-stage development company, ideally positioned for a re-rate as dictated by the Lassonde Curve, Valuation with production slated for 1H 2023. This will include a detailed company report, valuation, and coverage of developments over the next couple of months, which should include several catalysts. Further, we will give those on the free email list, our favorite companies nearing construction and production, times just before a market re-rate.

For anyone interested in trying out our paid subscription service free for 30-days (monthly newsletter, market alerts, select company development, company reports, and an actively managed look over my shoulder portfolio service) or those that want to sign up for our free email list, please visit Goldseeker.com 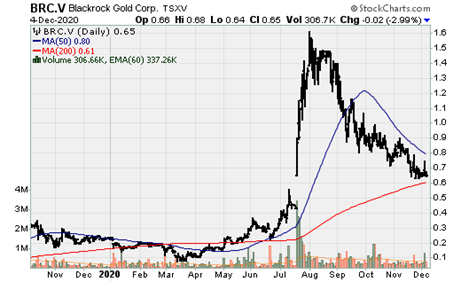 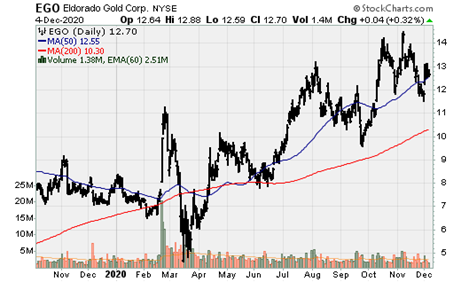 Endeavour Silver: Reports high-grade Gold-Silver drill results at its Bolanitos mine. Highlights include: 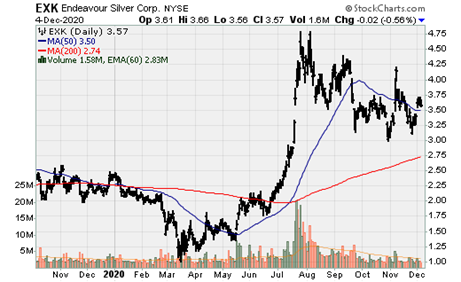 Ivanhoe Mines: With three world-class assets, Ivanhoe is currently advancing one of them to production, with another not far behind. The company announced extremely robust results in an updated feasibility study (FS) for its world-class Platreef Pd-Pt-Rh-Ni-Cu-Au project in South Africa. The study evaluated a 4.4mtpa underground mine with annual production of more than 500k oz. Pd+Pt+Au and more than 35m lbs. nickel and copper. The weighted basket of the four precious metals in the ore is more than $2,100/oz. Highlights of the update FS:

Ivanhoe also secured $420m in project-level credit facilities for its world-class Kamoa-Kakula Copper project in the DRC, including a $211m covered equipment financing facility with a $9m down-payment facility. This will be used to accelerate the project's Phase II expansion to 7.6mtpa by Q3 2022. Phase I production is expected to begin in early Q3 2021. The ultimate goal is to increase throughput to 19mtpa through a series of phased expansion, which would make it the world's second-largest copper mine. 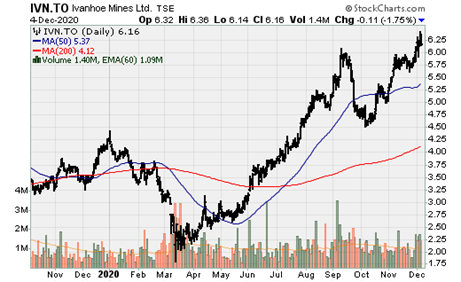 K92 Mining: Received the Thayer Lindsay award for best global discovery. The company has been incredibly successful as it only acquired the project in 2015, which at that point, the mine was on care and maintenance. The company questioned the geological model and re-interpreted it. The exploration team transformed the struggling mine into one of the lowest-cost mines globally (lowest 10%). 2017 was the big breakthrough year when the company tested its hypothesis that the two of the mine's deposits were actually the same deposit. K92 proceeded to expand the resource, which 1.65m oz. AuEq (Inferred) to 1.10m oz, AuEq (M&I) and 3.7m oz. (Inferred) with significant exploration upside remaining. Previously the operation was struggling to produce 30k AuEq oz. at high-costs, which is now on track to achieve 300-400k+ oz. AuEq (the high-end could be achieved if the 40% excess capacity from the stage II expansion is unitized, based on future exploration success) once the Phase III expansion is complete before year-end 2023. The company also announced additional high-grade drill results at Kora. Highlights include: 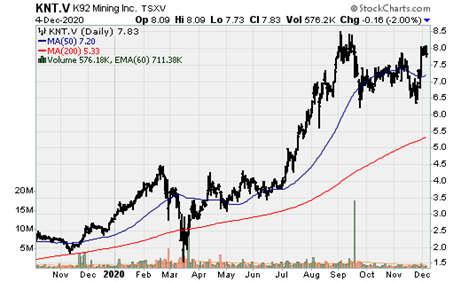 McEwen Mining: A rise in CV19 infection in the Santa Cruz Province in Argentina has resulted in the temporary lockdown of various mines, including its 49% interest in the San Jose mine. It seems that there is no end for issues at the company in the near term with the company unable to control costs, drastically reduce reserves and mine life (Gold Bar). Still, there could be light at the end of the tunnel, specifically regarding Black Fox. If you are looking for quality companies, this is the wrong place; however, given its high-cost structure, the stock price is extremely leveraged to the gold price. 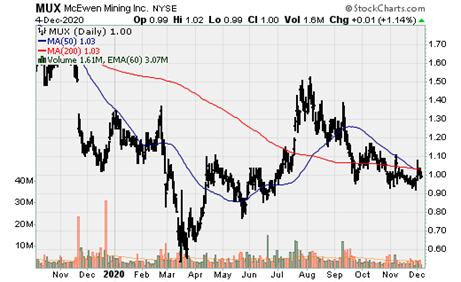 Osisko Development: The spin-off created via Osisko Gold Royalties started trading on Wednesday, December 2nd, under the tick $ODV. While it's called Osisko Development, rightly so, given its district-scale development project in Cariboo, it will also see production from two assets in 2021. Production is on track to commence at Bonanza Ledge II in Q1 (located on its Cariboo land package in Canada), which will produce 62k oz. Au for the first 2-Yrs; however, will some exploration or mill feed sourced anywhere on the property, the project should maintain 50-60k oz. Au for a longer period of time. Additionally, in the 2H 2021, production is scheduled to begin at its San Antonio Gold project in Mexico, projected to produce 50-70k oz. Au on average (1m oz. resource). The company is well-financed and has an equity portfolio valued more than C$75m.

The company is headed by Sean Roosen, who oversaw the building of the largest mine in Canada, Canadian Malartic, for the original Osisko Mining, which was subsequently sold through a joint acquisition with Yamana Gold and Agnico-Eagle. As part of the acquisition, he retained a large 5% NSR royalty on the mine, which was the foundation for Osisko Gold Royalties. In other words, Osisko Development is led by competent management, those with a history of value creation. 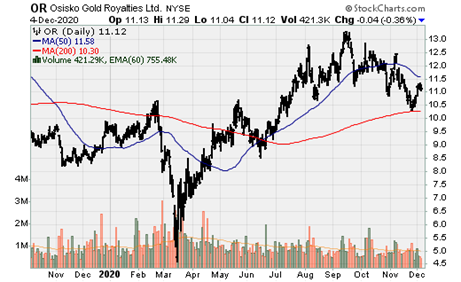 Sabina Gold & Silver: The company announced an update on the updated feasibility study for Back River. The company reports it is making good progress on the FS and updated resource estimate, with expected delivery in Q1 2021. The FS nor resource estimate has been updated since 2015, and given the exploration success, this will likely result in a much-improved FS, with Back River having a longer initial mine life. The 2015 FS envisions a 3ktpd operation, producing 200k oz. Au p.a. over an 11.8-Yr mine life from three pits and one underground mine at Goose. Since that time, multiple discoveries and resource extensions have been made at the project, including two separate high-grade underground zones at Umwelt. The new FS's goal is to increase both average annual production and mine life. This will be achievable, but to what degree remains to be seen. Three discoveries have been made since 2015, including the Echo-Pit, Llama underground, and Goose main underground. The updated study will maintain initial throughput of 3ktpd but include an expansion to 4ktpd in years four to five. 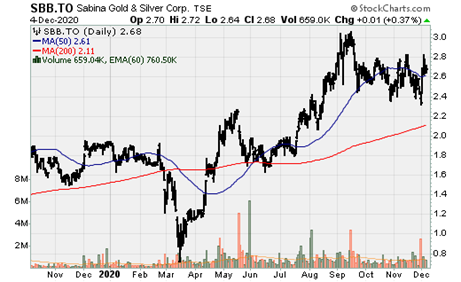 This is extremely conservative give the exploration upside on the Copler land package (drilling at Ardich completed after February are very encouraging for extension of mineralized zones). There are already significant additional resources not included in the mine plan. This study has outlined a path to sustaining production of 300k oz. Au from the district from at least 10-Yrs. The company envisions, bringing Ardich into production by 2023. 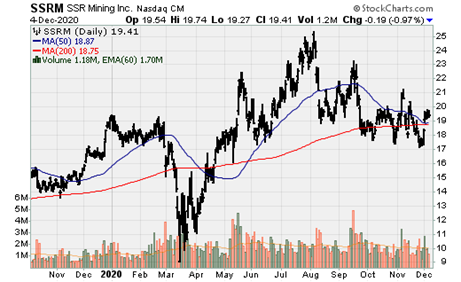 The company provided an update regarding its generative exploration program, outlined 2021 plans for advancing projects; Lavra Velha, Monument Bay, Borborema, and added two early-stage projects in Chile. Yamana has defined projects in its generative exploration program as Tier One, two, and three. Tier one projects have defined MRE's and opportunities to grow to potential economic thresholds in the next 3-Yrs, while tier two projects have achieved significant drill intercepts and whose geology and other factors support rapid resource growth. Tier three are prospective projects with known mineralization that warrant further drill testing.

Jacobina Norte (Bahia, Brazil) is a large, highly-prospective property that lies contiguous to and north of the Company's prolific Jacobina mine, with preliminary results showing excellent potential for discovering standalone Jacobina-type mineralization and the addition of a new mine along the greenstone basin. 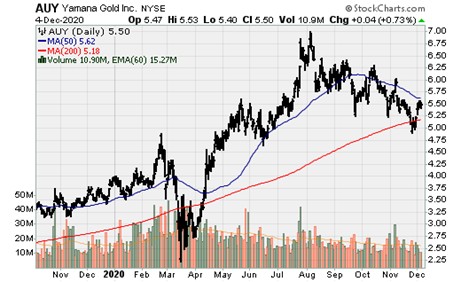