Gold Seeker Report: This Week in Mining Issue #29: The Correction Continues, Is There More to Go?

We had yet another volatile week in the metals and mining stocks, unfortunately with a downward trend. Both gold and silver are looking vulnerable in the short-term so its best to put together a shopping list in the event a larger retracement is coming. For longer-term investors, it really doesn’t matter as this is a digestions/ consolidation period for the metals. The mining stocks continue to trade as if gold is $1,700-$1,750/oz. and silver is $20-$22/oz. What’s interesting about the silver complex is that the equities are underperforming the metal in that they really haven’t made any substantive gains after the silver price crossed $21/oz +/-.

Note: We will be launching the Goldseeker.com website in the coming week so be sure to get on the free email list.  We will also be launching a subscription service which includes a “look over my shoulder” portfolio [this is a real portfolio, so I’m putting my money where mouth is] as well as a monthly newsletter, video and email updates when necessary among other content.

AbraPlata: The company closed an $18m private placement with a $9.9m investment from Eric Sprott. The company also announced assay results from two diamond drill holes at the Oculto deposit on its Diablillos project. These were designed to test the deeper gold zone. Highlights include 17.6m @ 4.22 g/t Au and 0.8m @ 31.17 g/t Au. 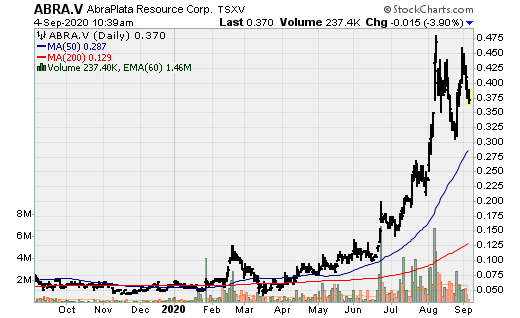 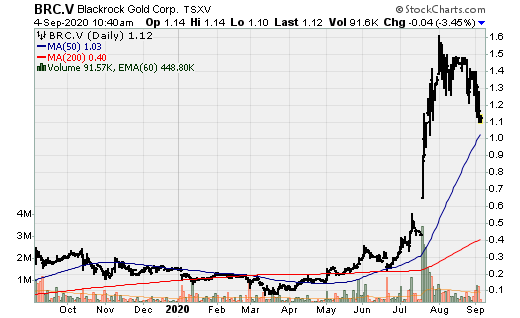 Erdene: The company published the results of the Bayan Khundii feasibility study. Highlights from the study: 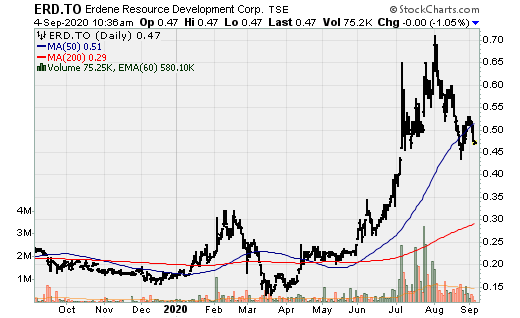 Fortuna Silver Mines: Delay after Delay and significantly higher capital costs, the company announced the start of irrigation and leaching of ore on the heap leach pad at the Lindero gold project, with first gold pour expected in October 2020. 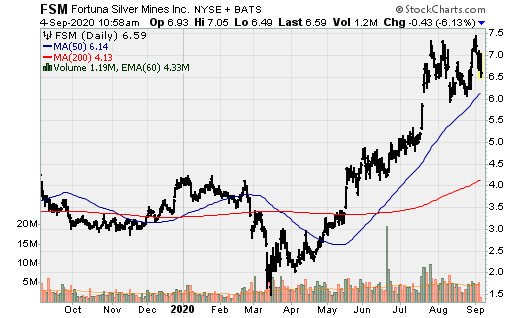 This confirmed and expanded the known mineralization at Golden Mountain, which is open at depth and along strike. The company will begin deeper drilling. 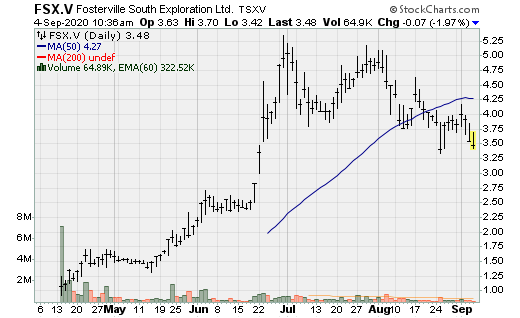 Gran Colombia: After the recent announcement that the company was initiating a quarterly dividend program, the company is giving more back to shareholders by launching a normal course issuer bid. It will allow the company to purchase 5.934m shares for a 12-month period. The shares outstanding currently stands at 61.941m shares. The company can reduce this share count by 9.60%. 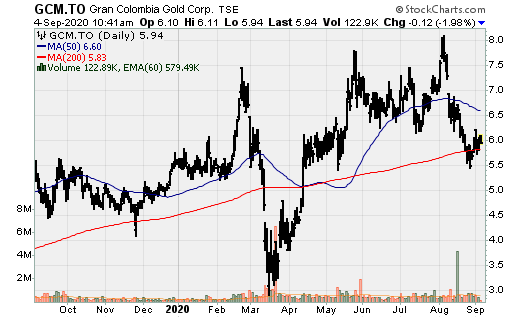 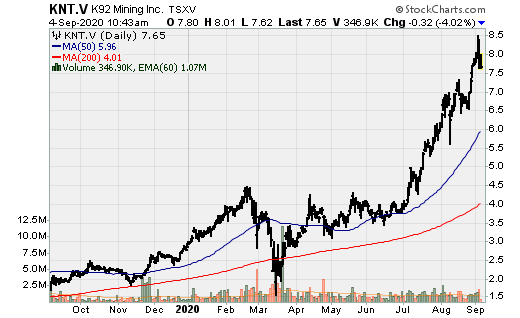 Lion One Metals: Reported the first wedge hole, which confirmed a high-grade lode at its Tuvatu gold project, Fiji. The highlights from this press release include 3.30m @ 85.70 g/t Au (wedge hole) and 2.0m @ 46.70 g/t Au and 12.7m @ 55.43 g/t Au from the mother hole. This is a very exciting time for the company as it has started drilling at depth as it’s sitting on an alkaline deposit, which is in the process of being delineated. These deposits are rather rare and tend to be large operations with at least 7m oz. of high-grade gold, although most tend to be much larger. It is only a matter of time before a company like Barrick Gold or another large producer acquires Tuvatu as it will likely be or comes close to being what Barrick refers to as a Tier-I assets; an operation which produces 500k oz. Au p.a. for 10 or more years at all-in sustaining costs (AISC) in the bottom half of the industry cost curve. While it may not meet the 500k oz. p.a. of production threshold, it will be a long-lived, low cost operation of scale. This remains one of my favorite exploration stage companies along with New Found Gold, Reyna Silver among several others. 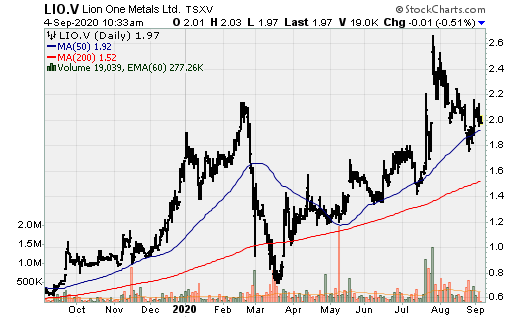 Mako Mining: Drilling at Las Conchitas hit multiple intercepts at the Bayacun zone, highlighted by 4.30m @ 22.26 g/t Au and 5m @ 11.71 g/t Au. This is a great story going largely unnoticed. However, this isn’t unreasonable as even doubling throughput to 1ktpd won’t see production reach 100k oz. p.a. at San Albino. Las Conchitas will serve as the future growth driver for the company, and based on the average vein, it is wider relative to San Albino. Although it won’t reach 100k oz. Au p.a. on a sustainable basis (at least without an acquisition or a further expansion), it will rank among the lowest decile on the industry cost curve with AISC less than $400/oz. 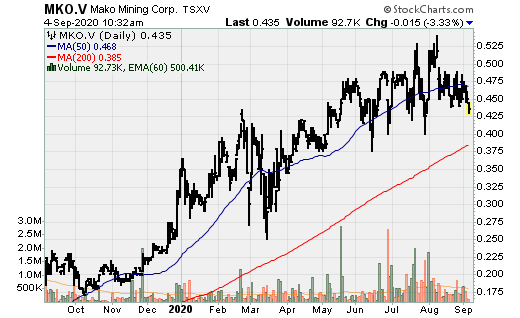 New Found Gold: Received the final permits and mobilizes for drilling at Keats discovery zone at its Queensway project. This is a company to watch going forward after the discovery made in late 2019 when the company intersected 19m @ 92.9 g/t Au at 75m depth. If you are looking for significant exploration potential in Canada, this maybe be one of the best. Time will tell.

Omineca Mining and Metals: Announced the receipt of drill permits with drilling to commence for the first 27 diamond drill holes, totaling approx. 8k meters at its Wingdam gold exploration project in the Cariboo Mining district. Further, the company announced it continues to expand its land package in Cariboo by staking an additional 12.13k hectares. 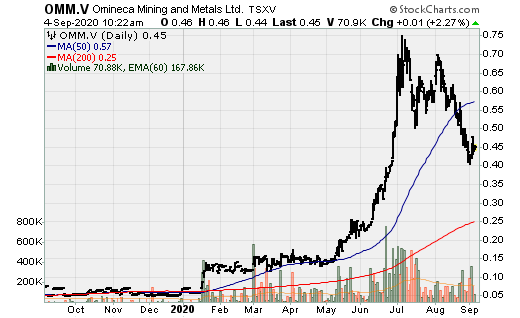 The continues exploration success at this project will allow for a larger project relative to the PEA. 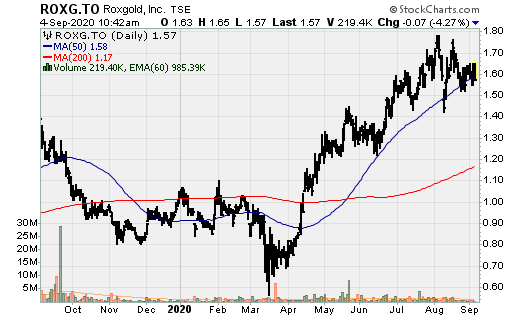 Sabina Gold & Silver: The company intersects additional high-grade gold at the Umwelt underground. Highlights include 32.2m @ 19.9 g/t Au and 20.1m @ 5.88 g/t Au in addition to those reported on August 20th; 19.4m @ 15.15 g/t Au, 7.70m @ 12.64 g/t Au, and 12m @ 13.72 g/t Au. These have been some of the best drill holes in terms of grade x thickness. The results Sabina is obtaining in the upper portions of the Umwelt high-grade corridor are over twice the grade of the Umwelt underground resource. These results will lead to higher-grade material being mined and processed earlier in the mine life and in turn, is making the project even more economic. 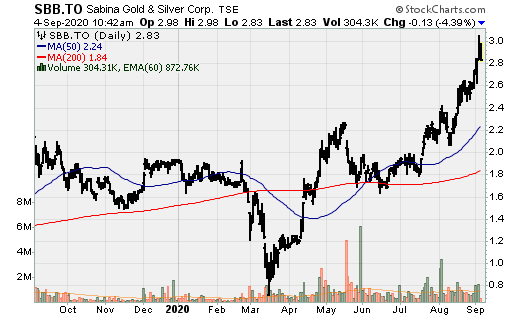 Silvercorp Metals: Reported an 18% increase in M&I silver resources and a 4% increase in 2P reserves, on top of 21m oz. of silver production between June 2016 and December 2019 at Ying. Highlights from the technical report include: 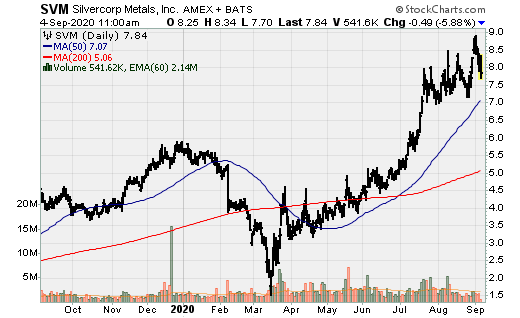 Troilus Gold Corp: Published the results of PEA on its wholly owned Troilus Gold project. Highlights from the PEA include: 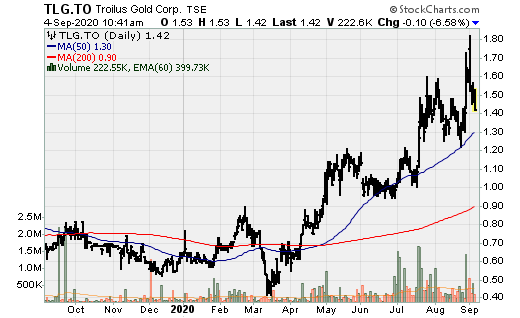 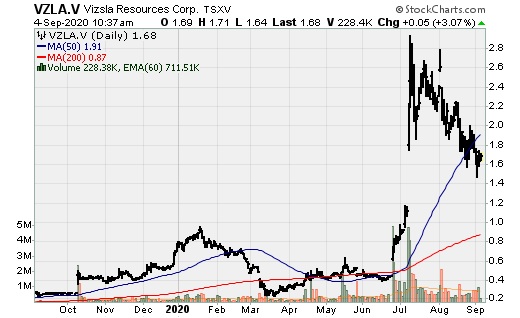 Wallbridge Mining: Reported it completed the first phase of metallurgical testing of the Tabasco and Area 51 zones at the Fenelon Gold project, achieving gold recoveries up to 99.1%! Further, using just gravity separation, recovery rates reached 84.1%. These are exceptional initial metallurgical results and de-risks the project. Wallbridge has stated its goal to become a sustainable 100k+ oz. gold producer but it is looking like average annual production could be substantially higher. 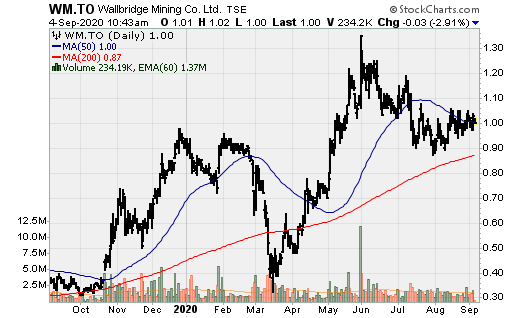 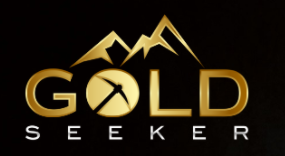