Did you know -- and if you truly follow the price of Gold you knauseatingly know -- that the 12-point price range (rounded to the nearest whole point) of 1836-1848 has traded within each of the past seven consecutive weeks? A mere glance at the above Gold Scoreboard -- whilst without such level of detail -- basically bears that out. "Bears...Grrrr..."

Regardless, whether we again reprise Isaak's

['65], Gold these days clearly exemplifies being on the Talking Heads'

Yet the hits just keep on comin'. So intrigued are we by Gold's seven weeks of stalemate that we've put together the following graphic (likely an analytical global Gold first) of price displayed in seven week bars from the All-Time High of 2089 in August 2020-to-date, (which is from 99 weeks ago across 15 bars). And given Gold not having gone "off the scale" throughout, 'tis rather like a musical composition that one might deem as an étude entitled "Gold in Seven-Week Bars" perhaps by Mendelssohn. 'Course, it hardly has the range and gaiety of "A Midsummer Night's Dream" [1826]; rather 'tis more of a boringly repetitive scale which even since that leftmost "high note" remains essentially directionless: 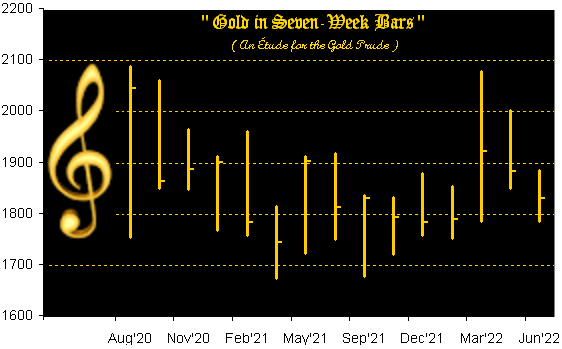 In fact from the 2089 high to Gold's settling the week yesterday (Friday) at 1828 is a decline of -12%. For the same stint, the U.S. money supply ("M2") is +19%. Yes it flies in the face of functionality, but even as the light-bulb of perceived wealth flickers ever dimmer on Wall Street, Gold is just not garnering the bid, yet...

But from the "Just Beware Dept." (for those of you scoring at home), the S&P 500's +4% relief rally this past week now places the Index's market capitalization at $34.3 trillion vs. the present M2 level of "only" $21.7 trillion. Which in turn (for you WestPalmBeachers down there) means for every $1 invested in the S&P, there's just 63¢ available from the entire liquid money supply to pay you upon capitulation. "Got Gold?"

Specific to the S&P's relief rally, 'twas well-anticipated throughout the daily Prescient Commentary of late, as penned back on 17 June that "...by our MoneyFlow page, the 5-day measure suggests the S&P 'ought be' +118 points above its present level of 3667 (at 3785). Too, by Market Values, the [S&P futures are] ... -402 points below [their] smooth valuation line..." Add to that -- with the S&P now up to 3912 -- it nonetheless remains "textbook oversold", although such condition can be fully unwound come Monday. Moreover -- this relief rally notwithstanding -- the S&P futures contract finds its linear regression trend (21-day basis) reinforcing its negativity such there we sense there's not much upside "umph" left in the S&P pump. Further, the 3600-3200 support zone has yet to be tested. More so, as you regular readers know, should the Economic Barometer be the harbinger of a "no growth" Q2 Earnings Season, that puts S&P 2900 on the table as the "live" price/earnings ratio reverts -- per its historical wont -- from today's 31.3x to the mean of 22.3x.

Speaking of the Econ Baro, here 'tis (blue line) with the rightmost relief rally for the S&P (red line). The Bloomy quote therein is ascribed to the "On What Planet is the IMF Living? Dept.": 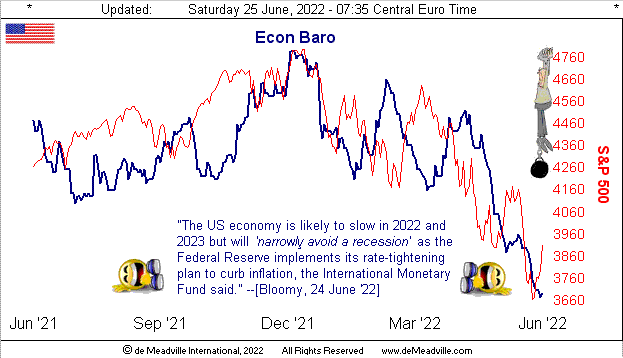 So just for the IMF crew to review, in REAL StateSide terms:

Such clearly recessive negativity herein noted (in other words, as ignored by the balance of the FinWorld at large), there were two bright spots for the Econ Baro this past week. One: May's New Home Sales were an upside shocker in sporting their second-best month-over-month percentage gain (+10.7%) in nearly two years, perhaps as folks move to lock in still relatively low fixed mortgage rates. Two: there weren't that many other notable incoming metrics to add to the Baro's woes, (save for a decline in Existing Home Sales, the third largest increase in the Current Account Deficit in the 24-year history of the Econ Baro, and the lowest University of "Go Blue!" Michigan Sentiment Survey we've also ever recorded). Other than that, everything's great.

Staying with the stagflation theme, per the Conference Board, some 60% of CEOs see the U.S. as in recession come next year. To translate for your ten-year old, most company presidents thus don't realize the U.S. economy is already shrinking. Include Federal Reserve Chair Powell in that bunch as well for testifying to Congress this past Wednesday that the Bank's rate hikes could cause a recession (in which comprehensively we already are).

But not to worry as St. Louis FedPrez James "Bullish" Bullard looks for the StateSide economic expansion (what?) to continue, (your laughter out there is infectious). Someone please fax to him the Econ Baro.

And to put a cherry on top (or better stated on the bottom), S&P/Experian's "Consumer Credit Default Indices" rose in May for the sixth straight month. Variable rate debt is a beautiful thing, (not).

Far from beautiful is Gold's ongoing parabolic Short trend, now 13 weeks in duration. Albeit in going nowhere, price has effectively stabilized in this year-over-year view, (oh nice add-on there, Squire). 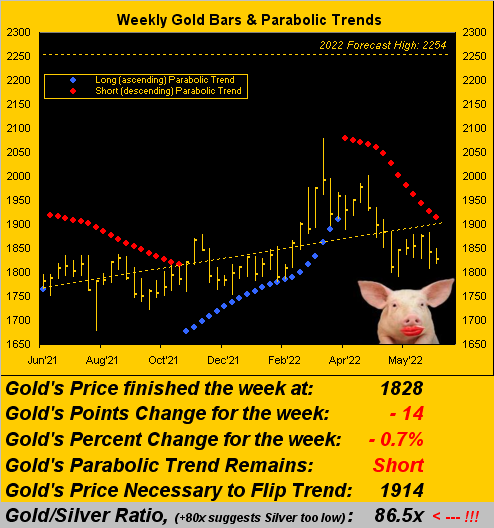 And as has been the case for some nine weeks running, the Gold/Silver ratio as noted remains over 80x at 86.5x. "Got Silver?"

Meanwhile, the near-identical pattern of both Gold and Silver drudges onward in sideways display as we next see here with the yellow metal on the left and the white metal on the right across their respective past three months. The declining "Baby Blues" in both cases depict their trends' negativity as gaining downside consistency, Gold itself again dealing with its underlying structural support zone which spans from 1854 to 1779: 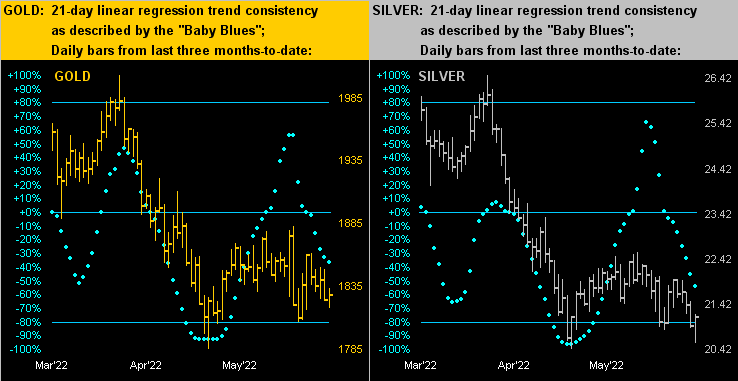 The 10-day Market Profiles for the two precious metals therefore lack sally. Be it Gold (below left) or be it Silver (below right), being "below" resistance seems the appropriate preposition: 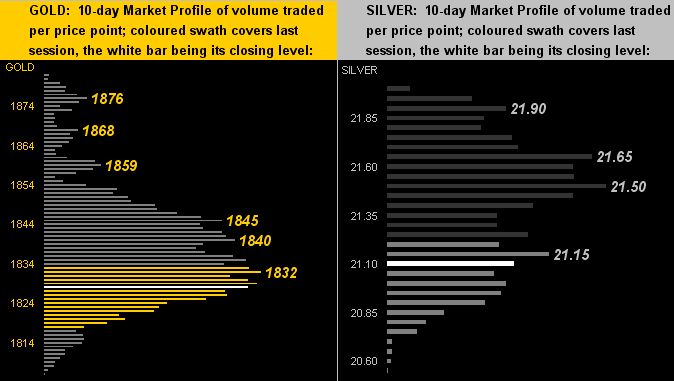 Below which, in turn, we've The Gold Stack:

To wrap for this week, we oft have fun with the foibles of the FinMedia, both analytically and certainly with respect to accuracy. Regular readers may recall our referring multiple times during 2019 to the writers' pool at the once mighty Barron's as now being populated by children. And without further ado, here we go again, thank you Dow Jones Newswires; (make sure you've swallowed that which you're drinking, lest you spew it whilst laughing): "Economists have sharply raised the probability of a recession, now putting it at a level usually seen only on the brink of or during recessions."

Seriously. Now get serious and grab some Gold! 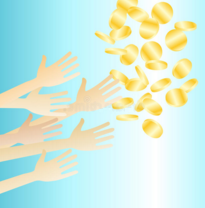