2 days 12 hours ago
Mint Shortages Further Pressure Supply Amid High Demand
2 days 13 hours ago
Everything Bubble About to Pop? Effect on Silver & Gold? - Lawrence Lepard
4 days 13 hours ago
Can Silver Drop Further? Chaos At The Comex Explained 🚨 - Nobody Special Finance
6 days 3 hours ago
COT Silver Report - September 30, 2022
1 week ago
The Bear Trap – Is It Finally Set?

Gold Summarily Tossed Even As Banks 'Admit' They're Lost

Rather: Gold yesterday (Friday) found its way well down into the 1854-1779 support zone, tossed to as low as 1783 before snapping back to settle the week at a still ever-petty price of 1813. Here's the year-to-date graphic, highlighted by the RUS/UKR spike 'n fade along with said underlying support zone; not much meat on this bone. And hopefully below support Gold ain't goin': 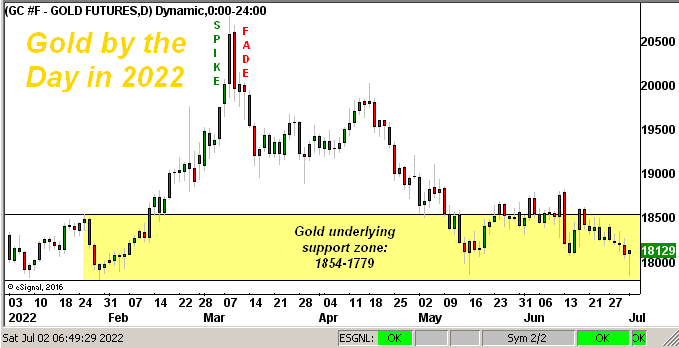 Moreover from the "Makes No Sense Dept." were someone to have told you mid-week that both European Central Bank President Christine Lagarde and Federal Reserve Chair Jerome Powell together at the ECB Forum on Central Banking threw their collective hands into the air effectively saying "we're lost..." with respect to "how 'tis all gonna play out...", you'd have well-expected the price of Gold to have instantaneously sky-rocketed up through the 2089 All-Time High and beyond! "Wrong!"

Further, 'tis said those very banks are amongst the COMEX culprits keeping price suppressed, (aka "The M Word" crowd). To otherwise allow the price of Gold to ascend toward where it ought be (4032 by the opening Gold Scoreboard) would pump panic through the global monetary structure, ("structure?").

On one hand, the bankers are being honest about having lost control of the situation; on the other hand they're being somewhat dishonest about the economy (certainly StateSide), in denial as to it obviously being well into recession.

You well know Chair Powell's having already stated that his Bank's interest rate increases can possibly lead to recession. Either that, or we recess anyway as nobody'll have enough dough to buy anything at inflation-infused prices. Lost indeed: 'tis the quintessentially perfect "Catch-22" --[Paramount, '70].

But wait, there's more: per Dow Jones Newswires toward week's end: "Some economists see a second straight quarterly contraction." Query: shouldn't EVERY economist have by now seen it these many weeks? Good grief!

"But there's only been one negative quarter so far, mmb..."

Squire is a master of teeing us up. Yes, technically, only Q1 of this year posted "nominal" Gross Domestic Product (i.e. with a blind eye to the Chain Deflator) as having shrunk. And until 28 July when we'll again see the wee "minus sign" in front of Q2's nominal GDP shrinkage -- and thus the "official" confirmation of recession by sporting two minus Qs in-a-row -- comprehensively no one at any high-level position of economic understanding and/or monetary management acknowledges the U.S as yet being in recession. Instead they muse that "...we could be in one later this year or by next year..." This is the same bunch that declares the stock market as not being a "bear" until a "20% drop" is in place and/or price goes below the "200-day moving average". We simply compile this: 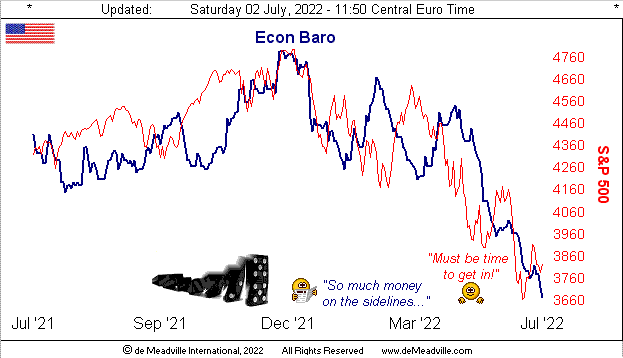 Indeed in anticipation of "official" recession, the Federal Reserve Bank of Atlanta does see for Q2 a second consecutive negative GDP, suggesting shrinkage of -1%; by the above Econ Baro, we deem that as modest. Why not -2%? "Do we hear -3%?" (And that's before discounting the deflator).

Still with respect to the above Baro -- which just now reached its lowest level in over 17 months back when "everything was closed" even though everything is (for the moment) open -- we remind you that its blue line is not so much an index level but rather an oscillator. Thus as economic metrics further weaken, were they to "get worse more slowly" (yeah he's still out there), that can cause the Baro to actually rise. On verra...

Fortunately there is the bright side. And who better to represent it than NY FedPrez John "It's All Good" Williams, who noted this past week (in reportedly having appeared on CNBS) that -- in spite of economic uncertainty -- he is not expecting a recession. (Perhaps some residual mushroom toxicity circulating there, but yes, that's what we just read from the once head of the SF Fed).

All that said, as 'tis month-end plus one trading day into July, here we go with our year-to-date standings of the BEGOS Markets. And despite Gold now being net underwater for 2022, it still has a podium position there in third: 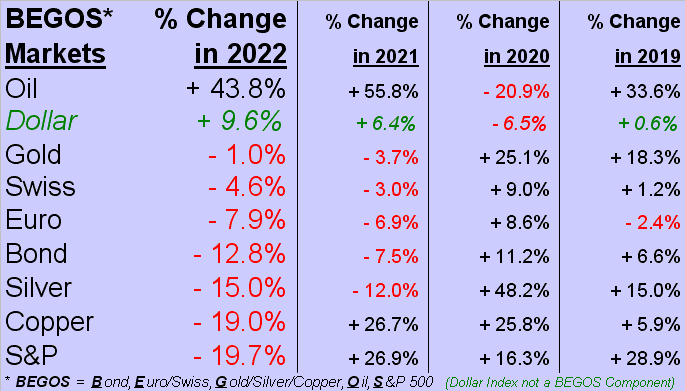 Otherwise, Gold looks fairly in misery with most of its fellow BEGOS Markets as next we go 'round the horn for all eight of them across the last 21 trading days (one month). The Swiss Franc clearly and rightly is getting the safe haven bid, but neither do we discount the Bond: in concert with its baby blue dots depicting the consistency of the grey linear regression trendline, the turn from their low has made the Bond the Star of the Show despite its being widely disparaged as not even so-so. As we've on occasion quipped: "Follow the blues, else lose yer shoes...", subjectively of course; we'd avoid the S&P: 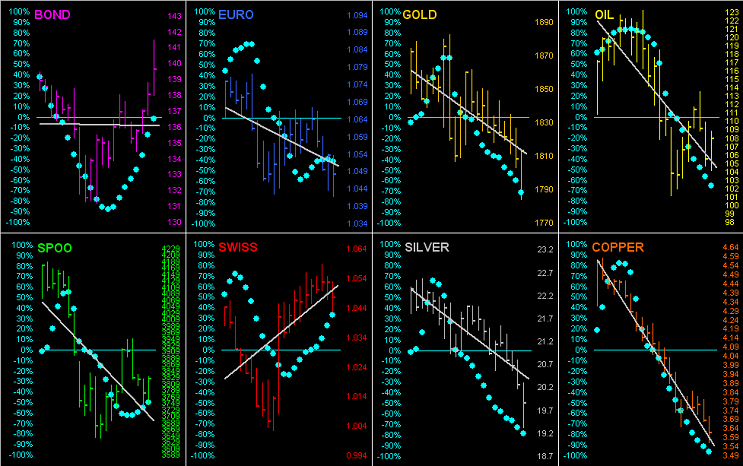 For Gold by the week as shown below from this time a year ago, the parabolic Short trend remains firmly in place as the red dots continue to descend. Again three weeks back we were anticipating such trend soon to end, but in the end, downward it continues to wend. More alarmingly, look at the Gold/Silver ratio: 91.3x! That's worth a "Holy Toledo!" per radio renaissance legend Bill King right there: 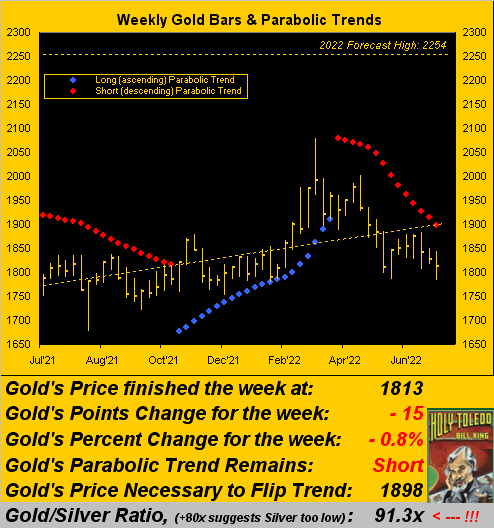 And with respect to that ratio, 'tis only been north of 90x for 2.4% of this century; (we know you home-scorers appreciate such info). 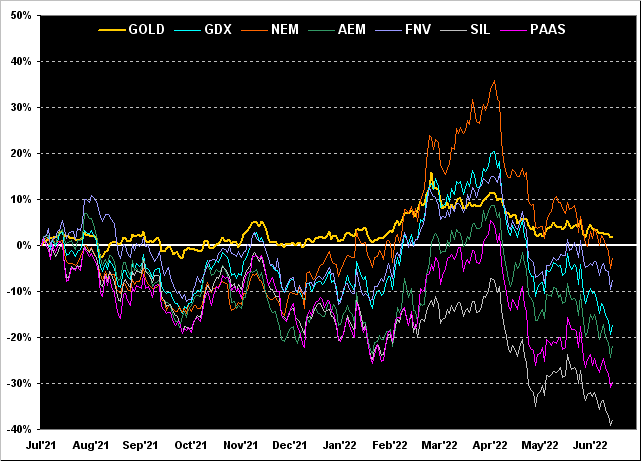 Again with reference to the above parenthetical, apparently the more there is of something, the more 'tis worth. Who knew?

Showing little worth comparatively are our 10-day Market Profiles for Gold on the left and for Silver on the right. Quite a range of overhead alpine territory to overcome there: 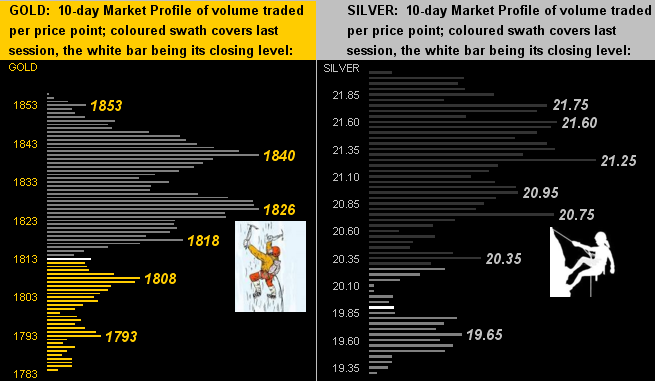 'Course, it wouldn't be a month-end edition of The Gold Update without this graphic of the Gold Structure in looking back across some 11 years of monthly candles. Simply stated, the battle continues: 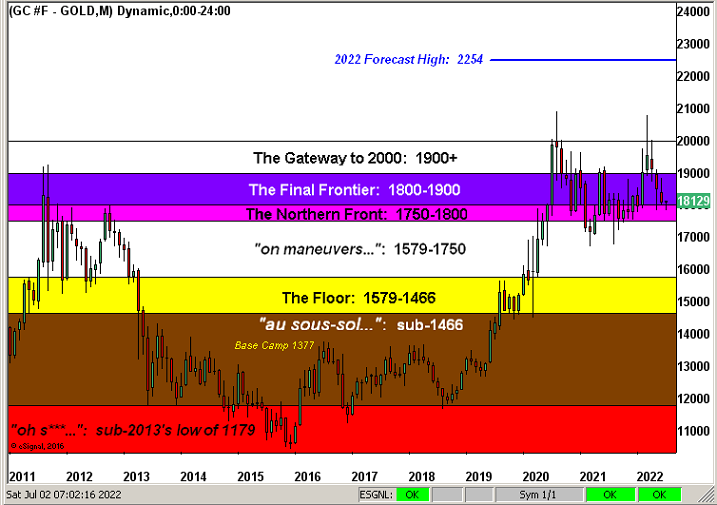 Ahead of yet another StateSide holiday-shortened week (the third in six), we've these three quickies:

■ Old and indeed expected news, for the first time in 104 years Russia (in whatever form 'tis presently) has formally defaulted on a foreign debt issuance. "Got Gold?"

■ Late to the party and somewhat unexpected news, Zimbabwe (its currency bearing the brunt in a few of our yarns over the years) is introducing Gold coins into its legal tender system toward preserving some degree of worth for the holders. Yep: they've "Got Gold!"

■ And as to "You canNOT be SERious" (thank you John McEnroe) news, nearly 60% of California's population are to receive --- wait for it --- "Inflation Relief Checks" of up to $1,050. Inflate to mitigate? What are we missing? The banks may be lost, but don't have your wealth tossed: Take a cue from Zimbabwe and "Get Gold!!" 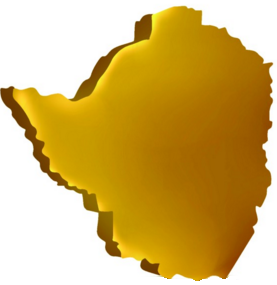