Got Gold? Bottom-Barrel Rates to Last for Years to Come

At least through 2023: That’s how long the Federal Reserve expects near-zero interest rates to last as it seeks to support an economy that’s seen more than 60 million jobless claims since mid-March. Gold has thrived in this low-rate environment, hitting an all-time high of $2,070 an ounce in early August, and I believe this price may be retested and surpassed given the extension of the Fed’s easy money policy.

I’ve shared with you a number of times that my three-year price target for gold remains at $4,000. This week, Bloomberg commodity strategist Mike McGlone went even further, calling for $7,000 gold by 2025 as balance sheets at the world’s four biggest central banks continue to expand as a percentage of GDP. 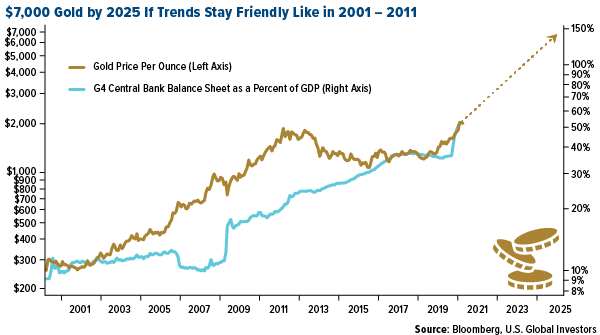 According to Mike, the same friendly monetary conditions that propelled the price of gold up 7.5 times between 2001 and 2011 are visible today. The difference now is that quantitative easing (QE) as a policy is “accepted on a global scale,” suggesting there’s “little to stop” G4 central banks from slowing their asset-buying programs.

Gold at $7,000 may seem unrealistic, but did you ever imagine we’d see $26 trillion in U.S. national debt? Or $15 trillion in global government bonds that trade with a negative yield?

These are not normal times, to say the least, and with currency debasement a real threat, I believe it’s crucial that investors have exposure to real assets such as gold and precious metals.

Plus, Treasury investors aren’t seeing any yield currently. Some investors don’t like gold because it doesn’t generate any income, but the 10-year T-note is actually costing them as much as 100 basis points right now, when adjusted for inflation. This vastly lowers the opportunity cost of holding gold and silver. 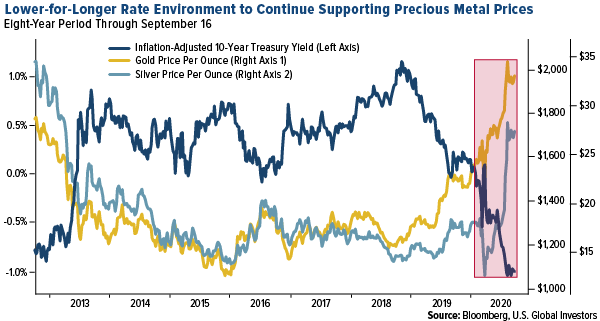 Like physical gold, gold mining stocks have been on a tear this year, with the NYSE Arca Gold Miners Index (GDM) up more than 43 percent year-to-date. But unlike gold, explorers and producers have not yet returned to their previous all-time highs set in September 2011. As of today, the group is still off by about 36 percent, so the upside potential remains attractive.

In fact, gold mining stock valuations are improving compared to the broader market right now. The chart below shows you the ratio between the S&P 500 and the GDM. It tells you how many “shares” of the GDM it takes to buy a single “share” of the S&P. (You can’t invest in an index, though, remember.) Between 2001 and 2011, when the price of gold rose 7.5 times, the ratio went from 7.4 shares of gold stocks to 0.7. But once the bottom fell out from underneath the gold price, mining equities collapsed, and the ratio went back up above 5.0.

As you can see, the ratio is now headed back in the right direction. And with the exception of the COVID-19 pullback, this has all been happening during a period that’s seen the stock market soar to new record highs. Today, the ratio is close to breaking through the 25-year average of 2.5, which I would see as highly bullish for precious metal miners.

Do you know the 5 M’s of Mining? Curious to know how they can be used to pick gold mining stocks? Watch the video below, and make sure to like it and subscribe to our YouTube channel!

All opinions expressed and data provided are subject to change without notice. Some of these opinions may not be appropriate to every investor. By clicking the link(s) above, you will be directed to a third-party website(s). U.S. Global Investors does not endorse all information supplied by this/these website(s) and is not responsible for its/their content.

A basis point is one hundredth of one percent, used chiefly in express differences of interest rates.

The S&P 500 is widely regarded as the best single gauge of large-cap U.S. equities and serves as the foundation for a wide range of investment products. The index includes 500 leading companies and captures approximately 80% coverage of available market capitalization. The NYSE Arca Gold Miners Index is a modified market capitalization weighted index comprised of publicly traded companies involved primarily in the mining for gold and silver.