17 hours 51 minutes ago
The Short Position in SLV
23 hours 57 minutes ago
Here Is Why Silver Demand Will Climb to a New Record High! - Keith Neumeyer
4 days 1 hour ago
This Is Why NOW Is the Perfect Time to Buy Silver - Garrett Goggin
4 days 1 hour ago
Rico Charges Dropped On Silver Manipulation Trial
4 days 22 hours ago
Has Inflation Been Defeated?

How Gamestop Will Affect The Coming Bear Market 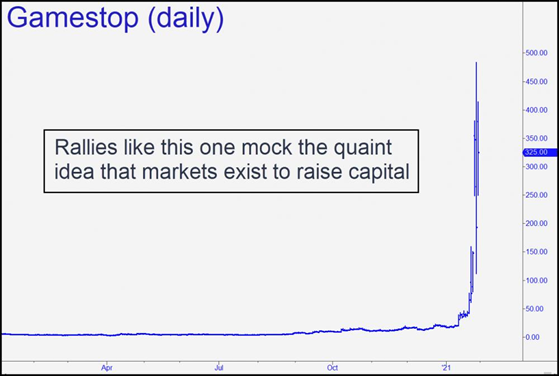 The news media went all-in over the weekend trying to explain the significance of the Gamestop saga, but because few traders were asked about it, there was little in this torrent of analysis to enlighten. Most of the reporters, talking heads and pundits focused on the obvious, sensationalizing a story about how the little guys have drawn first blood and are about to stick it to giant hedge funds by targeting their short positions. This kind of claptrap makes for salacious reading, but there's a much bigger story that has so far gone untouched. Before I explain, here's some point-and-counterpoint to get you past the disingenuous swill being dished out in the blogosphere and by the mainstream media:

Popular Narrative:  The Reddit/Robinhood mob (RRM) has declared war on hedge fund biggies, and so far the smart money has been getting its butt kicked. Reality: The damage so far is just a mosquito bite on the behind of hedge fund whales like Steven A. Cohen. The Reddit mob is just a five-year-old who has discovered where Daddy keep the matches.

PopularNarrative: "We’re going after Citadel next!" Reality:  Nice try, kids, but this kind of hubris is going to boomerang  on you. As a rallying cry, it makes good headline fodder, since the name ‘Citadel’ conjures up the financial establishment’s most impregnable fortress. In the end, though, you can bet on Citadel & Friends to change the game so that the edge you pishers currently enjoy evaporates quickly, assuming it hasn’t already.

Popular Narrative: "After Citadel, we're going to squeeze shorts in silver." Reality: We're actually rooting for you on this one, since precious-metals markets are manipulated by unmitigated scumbags. And, yes, your merely having announced last week that silver is in your cross hairs seems to have provided a little added boost to silver quotes on Thursday and Friday. But before you take on the commodity markets, better read up on Nelson 'Bunky' Hunt, a billionaire when that was real money, but also a trader smarter than all of you put together. He got crushed trying to corner silver even though he'd done everything right. Hunt would have succeeded if Comex had not raised margin requirements to such heights that only two players were left in the game: Hunt and Eastman Kodak.  This killed speculative demand, and eventually Hunt himself.

Popular Narrative: The Reddit/Robbinhood mob (RRM) has been making money hand-over-fist. Reality:  The number of big winners is probably far smaller than imagined by the blogosphere and news media, and the sums are smaller. Don't assume that all of the greedy little guys got out at the top, or that they will. Some will predictably become such believers in their omnipotence that they may actually buy the top, as occurred at the end of Bitcoin's first mania.

Popular Narrative: The little guys have outfoxed the smart money. Reality:   For a nanosecond, maybe. But how smart are they, really? Probably not one of them in 500 understands that certain option strategies they love to use, such as covered-writing exploding stocks, can backfire lethally. In fact, out-of-the-money options they've sold can be exercised, and this can happen well before the options expire. The unavoidable result is a stock-settlement mismatch that can turn seemingly winning bets into unanticipated disasters overnight. We may be hearing more about this soon.

Popular Narrative: Regulators will soon put a stop to this nonsense. Reality: No, they won’t. For one, the kids haven’t actually broken any laws; targeting shorts is nothing new, and it is only the ease of doing it in the blogosphere that is causing regulators to gnash their teeth and tug at their hair. For  two, the ability of institutions and other players to short stocks with little hindrance is essential to keeping the markets running smoothly.

The Power of Desperate Buying

Now to my salient point, and it is this: A mere week’s worth of short-targeting shenanigans has permanently altered the game in ways that will have deep and lasting consequences. To be clear, let me say again that SAC, Citadel and the Comex do not fear the mob on social media; rather, they understand that the would-be giant-slayers eventually will self-destruct because of their ignorance, inflated self-importance and reckless boldness. However, the Smart Guys do recognize that the war is asymmetrical, since the little guys don’t need to put any skin in the game to trigger off a massively costly short squeeze.  All the little guys need do is mention in a chat room that a particular stock has short interest greater than, say, 25% of the float, and the squeeze is on. This kind of war is so very asymmetrical that Big Money cannot possibly fight it.

What this implies is that over time, short interest will eventually diminish to the point of insignificance. The bottom line for the stock market is that bull markets will become less bullish, and bear markets more bearish. Why? Consider that short covering is the most powerful propellant of bull markets. That's because it is the only source of demand sufficiently urgent to push stocks through otherwise impenetrable layers of supply and daunting prior peaks.  I say ‘urgent’, but ‘desperate’ is probably more accurate, since short covering is driven by margin calls from brokers frantically worried about a customer's solvency.  When we talk about buying the dips, the main buyers on market weakness, even moreso than bargain hunters, are short-covering bears.

Short-covering is also the force behind the breathtaking rallies that occur in bear markets. From a psychological standpoint, the "purpose" of these rallies is to convince investors that stocks have turned the corner and are in a sustainable rebound. Short-squeeze spikes are a routine feature of bear markets, and they recur until an exhaustion spike going in the other direction destroys the last vestige of hopefulness.

But because short-interest numbers are about to decrease in the aggregate, it is predictable that, henceforth, short-covering will have less and less power in bull markets and bear markets. In the coming bear market (which my technical runes suggest may already have begun), we are likely to see downtrends that are more relentless than in the past, and bear rallies that are not quite powerful or persuasive enough to rally suckers' hopes.

For now, though, as the big players attempt to shrink their short positions, their efforts will remain fully exposed and vulnerable to raids by the Reddit mob. The result will be wack-a-mole rallies in overly-shorted stocks for the foreseeable future. This will continue even as the stock market moves deeply into bear-market territory. However, the rallies will be isolated and add little boost to the broad averages. They may even act as a psychological depressant, a nagging reminder of the fact that global securities markets were never more than a giant casino game to begin with.