Recession? What We Call It Is Irrelevant… 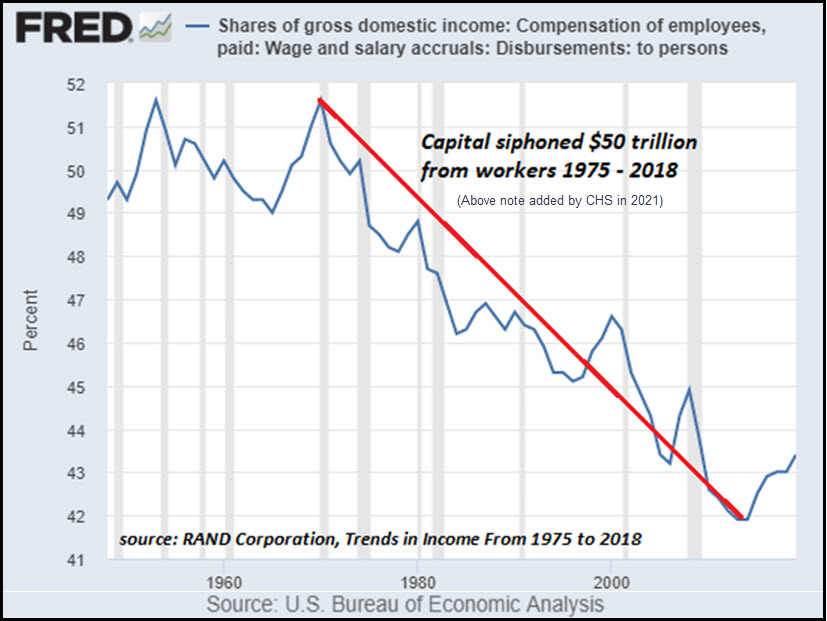 Call it a recession or anything else you prefer, but the bottom line is that the prosperity of decades past is not coming back. Thinking expansively about the economy is no longer part of the American mindset, since, as should be perfectly clear to everyone by now, the Fed's epic, easy-credit hoax can do little but inflate asset values to the point of collapse. We are nearly there now, even accepting that the U.S stock market, afflicted by mass psychosis, will remain capable for a while of staging one last, fatally deceptive hurrah to make certain everyone is aboard for the crash that ends two generations of economic madness.

We can no longer delude ourselves into thinking the statistics pushed at us by Biden, but also by his predecessors, portend better times. Least meaningful of all, but still greeted with spin, hubris and a raucous burlesque of feigned nervousness on Wall Steet, are employment figures that would suggest the economy is producing plenty of jobs. But what kind of jobs, and for whom? Leave it to my friend and colleague Charles Hugh Smith, one of the most insightful thinkers in the blogosphere, to tell it like it is: The picture is quite despairing, he avers. Not necessarily for you and me as individuals, though, since each of us in theory has the wherewithal to plan for dealing with the worst of times. For him personally, that means not merely hunkering down with a perhaps overly optimistic Plan B, but with a rigorously plotted  Plan C to make him as self-sufficient as possible when an energy-dependent food network has made it extremely difficult for people living in heavily urbanized areas to feed themselves and keep warm. Accordingly, he has also scaled back energy use in and around his home in Hawaii, cutting out unnecessary things so that reacting to the coming crisis will not require sudden, drastic changes in his lifestyle.

Concerning all those pathetic jobs the economy has been creating, they won’t have even a microscopic impact on debts we’ve piled up ensuring ruinous deflation rather than the piddling CPI kind that is playing havoc these days with household budgets. For years, I've catalogued the ways in which these massive and still-exploding debts have hollowed out our standard of living and desiccated The American Dream. It began in the inflationary 1970s, when single-earner homes could no longer afford the level of housing, medical care and college tuition that had obtained in the 1950s. The feminist revolution burst forth to fill the income gap, not because women were particularly eager to join the workforce, but because they had to.

And now, for reasons Charles’ most recent weekly installment of Musings makes painfully clear, there is a counterforce big enough to overwhelm the pittance that working women and harder-working men have clawed back from a relentless, secular economic decline. Specifically, the work ethic is dying among young people who offer our only hope for dealing with a debt trap that has eroded the so-called good life to the vanishing point. Nearly costless capital has allowed multinational, corporate giants to seek labor wherever it is cheapest. As a result, they have been able to siphon more than $50 trillion from workers since 1975 (shown in the graph above). Employees are making a slight comeback these days, but they know they can't win and would rather go slack on the job rather than struggle for their entire lives just to make ends meet.

We should therefore not delude ourselves into thinking Millennials and Gen X-ers will be able to pay the Social Security and Medicare benefits of Baby Boomers expected to live increasingly into their 80s and 90s. Our demographic destiny is as grim as it is clear, since it portends, among other things, the wholesale collapse of real estate values along with taxes collected on Boomer retirements homes valued at $500,000 and up in more hamlets, boondocks and rural subdivisions than anyone could count. Charles spells out the problems this will create when the debt-encumbered sources of America’s false prosperity are laid bare by intractable, deepening recession:

1. There won't be a younger generation with the means or interest in buying all the global Baby Boomers' overvalued assets.
2. Those inheriting their Boomer parents' assets which they assume they can sell at today's bloated prices will be shocked at the decline of the valuation once the massive supply overhang hits the market.
3. Younger generations with little interest in trying to make a lot of money to sock away for a distant retirement will not be funneling earnings into stocks, bonds, real estate investment trusts, etc.

The Decline of Financial Assets

4. As labor demands an equalization of income and power, corporations will be hard-pressed to extract more profits from labor. Profits will be pressured for many reasons, including labor costs.
5. Consumption may hold up better than expected as younger workers spend their earnings on experiences and enjoying life rather than socking away money or devoting it to paying mortgages and property taxes.
6. The sacrifices required to live in high-rent cities--the equivalent of a mortgage--will push younger workers out of high-priced cities, eventually reducing demand and rents.

He further notes that "if cities decay per my forecast, this migration could gather momentum much faster than the mainstream expects.

There are other second-order effects of the destabilizing inequality generated by Globalization and Financialization, and the unraveling of these two forces will generate additional consequences few anticipate."