November 23, 2022 Cashless Society Talk Goes Mainstream in a Hurry and Should Be Trusted Like the NSA
November 16, 2022 The Money of the Apocalypse is Rising in US Banks from the Ashes of the Cryptocrisis THIS WEEK!
November 03, 2022 Powell Feinted Full Dovetard, and Stocks Still Plummeted. Why?
October 30, 2022 GDP Stands for a “Gross Domestic Pig” During Election Season
October 26, 2022 A Peek at the Peak of Peak Stupidity in Stock-Market Euphoria

Stinking’ “Stonks” Got Smoked but the Pivotheads Still Have Some Catching Down to Do!

In a “thank-you Jesus” moment for those us us who are sick to death of the arrogance, greed, rigging, gambling, denial and freakin’ insanity of the US stock casino, the market pivotheads got a post-Halloween pounding of their hollow pumpkins into the dust of the earth at the end of today’s trading.

How the battle raged

As Zero Hedge summarized the day,

The day started with a hangover from Powell’s rug-pull; then the Bank of England hiked rates as expected, warned of a longer recession.… Subsequent rate-cut expectations hawkishly declined (rates ‘higher for longer’ just as Powell wanted)…. The Dow and Small Caps desperately tried to stay unch, the S&P lost further ground, and Nasdaq was monkeyhammered (down 2%). Things traded sideways for much of the afternoon until the last 15-20 mins when everything went pear-shaped and puked…. The Nasdaq is down over 6% from the highs yesterday right before Powell started speaking (that’s over $800 billion in market cap)….

I think that sums up another day of volatile swings quite nicely. 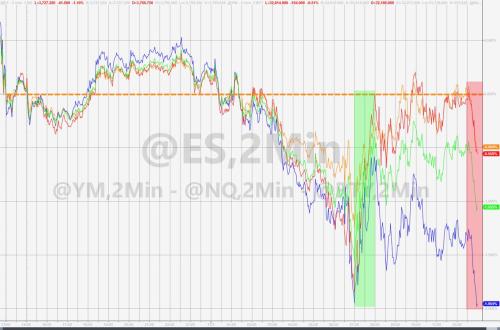 Dow down 0.46%, S&P -1.06%, NASDAQ -1.73%. It was, however, the abrupt head-stomping at the end that became the dramatic moment of the day … just when it looked like those who have been eternally, infernally expecting a Fed pivot had pulled off a recovery for the Dow that was going to hold. These greedy traders can all go home now and get smashed.

In addition to the tanking of all three major indices, 2YR Treasury yields continued their recent stretch toward their long-ago 2007 summit: 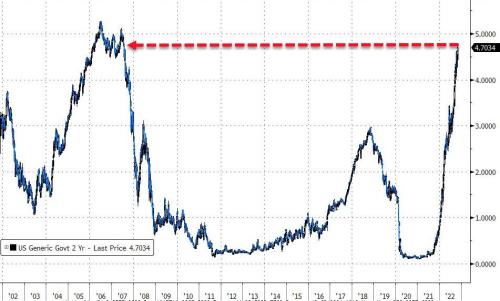 That caused the yield curve to run all the way past its dot-com bust days to become its most inverted since the high stagflationary recession of 1982: 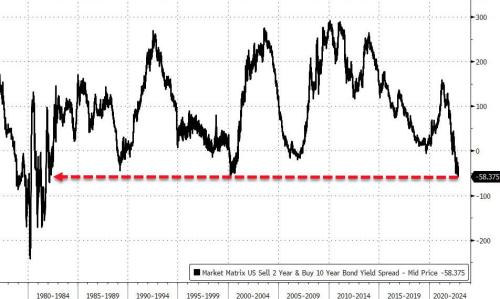 Which, if you were around to remember, was the point in history when the Fed fought its most intense battle ever against high inflation, raising its target interest rate far in excess of where it took it yesterday:

Bonds know best. So, “stonks” stink and have some catching down to do with bonds thanks to the bulls’ short attempted rally that never made it even to the declining trend line of former bear-market rally peaks! 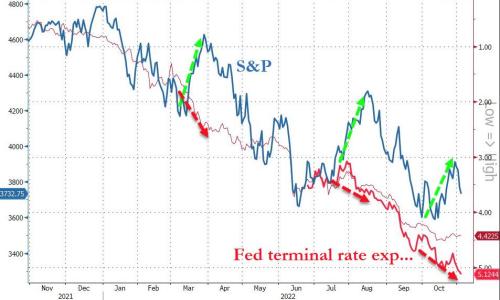 As you can see, the stock market has had to catch down to the bond market (clearly the smarter of the two) all year, while the bond market (inverted in the graph of yields) is trying now to catch down to the new final expectations for the Fed Funds Rate. As I noted in yesterday’s article, Father Powell, who should know best about where the Fed intends to take that rate, admitted the Fed had already had to revise its anticipated terminal date and peak rate to further extremes than it expected more than once because inflation is not cooperating at all, so that he couldn’t even be sure the new expectation is right. Transitory inflation is like that I guess. So, he concluded starkly by saying,

There is no sense that inflation is coming down…. We’re exactly where we were a year ago…. It’s premature to discuss pausing…. It’s not something that we’re thinking about. That’s really not a conversation to be had now. We have a ways to go.

How today’s battle ended and the journey ahead

Today turned out to be, as I suggested yesterday, “a little harder for the bulls to get their enthusiasm back this time.” The market riggers appeared to be trying their best to resurrect the market back to unch throughout the afternoon, but the last half hour of trading stomped the stupidity down hard, and this time I didn’t hear the usual chorus of market singers out there saying, “We can do this.” So, maybe the Fed finally got its message home. 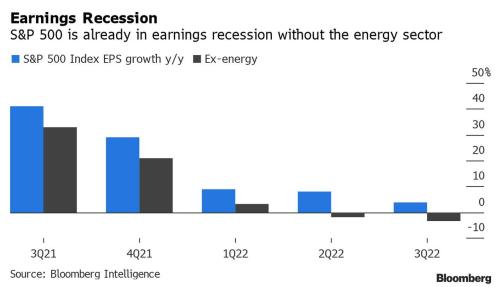 … we are now in an earnings recession, and with many more earnings to be reported next week to a market that seems to have sobered up a little, there is not likely to be much salve for the bull’s wounded head.

The broader corporate world is feeling the pinch of raging inflation, the resultant higher interest rates from the Federal Reserve, the surging dollar and slowing demand.

That describes quite a headache for the downed bulls. Wait until they finally end their denial and figure out we’ve been in a recession all year — a recession that the Bank of England said today will become the longest one the UK has ever had. Such dour talk is not the usual dulcet tones one expects to hear from central banks. The UK is worse off than the US, but we are certainly in no climate to be bidding up stocks based on two quarters of declining earnings, and realistic forward earnings expectations.

Citigroup stated clearly today that we are entering an earnings recession that will be the eighth in fifty years, and they concluded,

We remain concerned that interest-rate-obsessed equity markets have yet to price in the true earnings impact of a full-blown economic slowdown.

Citi forecasts another 5-10% contraction in corporate profits that has not been priced in because most hollow-headed analysts are still actually pricing in modest growth. I’m afraid the candle inside of Jack’s head is not burning too bright.

“We are still not yet at the sort of 20-30% earnings decline which usually comes with a recession,” said James Athey, investment director at Abrdn. “Recent recessions have been fleeting because of the speed with which the Fed has responded through easier policy. That’s less likely this time given the inflation backdrop.”

Let’s hope the market doesn’t even think of getting back on the stupid train. 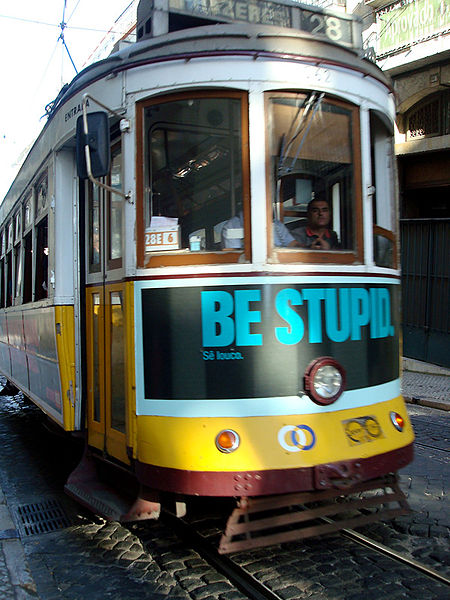 We’ve had enough of that ride.

But, if it does, the carved-out traders in this market will certainly get their pumpkin heads stomped down as many times as they try.

To keep up with all the action, subscribe for free to The Daily Doom.