December 01, 2021 Federal Reserve Finally Admits it was Wrong about Inflation — NOT Transitory!
November 29, 2021 “Let them eat tofu”: Federal Reserve Combats Inflation at Thanksgiving with Unpardonable Diet Advice
November 21, 2021 The Stock Market Does Have a Tipping Point Where Bond Interest and Inflation Both Matter A LOT
November 12, 2021 The Inflation Death Spiral has Begun: Inflation Hits Stocks, Bonds and Government Like a Bomb Cyclone
November 08, 2021 Warning Signs of Recession in GDP and Especially its Components

Stock Market as Forward Looking as a Caboose

“Remember that the market is a forward-looking indicator. Ideally, it is pricing in the gains of the next six to 18 months.”

Famous last words again and again. That sunny advice about today’s overpriced market was repeated again about a week ago. It is the same excuse that was routinely deployed at the beginning of this rally back in April and May and especially in June and July as the market recovered most of its losses in spite of all the gloom. “These prices are justified,” they said, “because the all-wise market looks forward six months or more, and by the start of 2020, the economy will have almost completely recovered.”

Everyone was claiming summer’s steep climb in stock values were justified because of the V-shaped recovery that was going to take place. Here we are a year later, and I’ll say what I said then:

“Poppycock,” said I said in essence. “The market is not forward looking at all; it is forward fantasizing.” I claimed the market was pricing in ridiculous dreams that were floated on hope and denial. It has been going up ever since. The frustrating part is that the market’s cheerleaders keep using the same justification, and no one calls them on it.

We are now at that point in time that was used last summer to justify the stock market pricing in a full recovery by early 2021, yet we still have unemployment and permanent Main Street business closures that are worse than the Great Recession. Those closures assure most of the remaining jobs are never coming back. Returning to full employment is a totally different challenge when you are talking permanently shuttered businesses versus recovering from temporary layoffs in businesses that kept running but at a reduced level, which can rehire when the economy comes back. 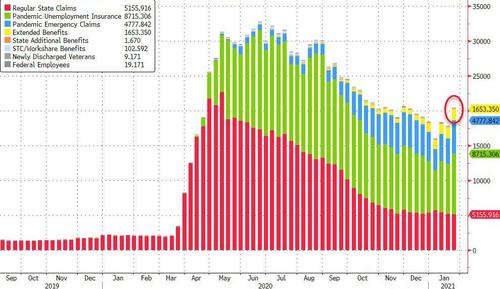 Early last summer, I said about half of the jobs would snap back quickly during “reopening,” but the ones that didn’t would show us the level of permanent damage from our global economic lockdown because those would be due to the businesses that offered those jobs being gone for good. That would be the reason for (the reality behind) the plateau you would see.

You can now see the recovery flattened months ago. In fact, unemployment is getting worse again. So, that scenario I presented is exactly what played out. About half the jobs were lost for good. Replacing them requires creating entirely new businesses, not just getting existing ones back up to speed. They are not just layoffs; they are businesses that got entirely flushed by am economic tsunami.

No truth penetrates this denial

How long can financial writers keep using the same excuse to justify new stock gains on top of the gains they already used that rationale for now that the future the stock market was supposedly wisely foreseeing has been proven wrong? Yet, there it was again about week ago. “The market is not overpriced and has room to run because it is forward looking.”

Now, you might say, “We’re getting there. By twelve months we’ll be there. And they did say six to twelve months forward looking.” Actually, I mostly remember hearing “March of 2021” or “Q1 of 2021.” Regardless, we’ve already stopped getting there. The unemployment numbers we continue to have are so bad that we would normally call them the worst recession since the Great Depression. And we’re not longer getting anywhere but worse.

So, how do you justify still more stock-market gains, as Mr. Eternal Sunshine above did, with the same flamboyent claim of a V-shaped recovery that we were told would be fully in place by this month? Here we are with the Dow having climbed another 6,000 points since the end of July. Has the market been pricing in a second full recovery since July?

It’s blatant self-deception that continues because we can’t handle the truth. The truth is that more than 90% of New York restaurants were still unable to pay rent as of the start of 2021. In fact, the number that could not pay rent grew every month during the last half of 2020. It didn’t get better. It got worse!

The truth is that thousands of restaurants in New York have already said they will never reopen. Many of those that are left are entirely dependent on government aid in one form or another.

“Ah, but that’s New York,” you say. “The city is now post-apocalyptic anyway. What do you expect from a city in a state with a womanizing governor with no economic sense who lies about the deaths of old people to cover his COVID failures?”

Fair enough, but that truth, while seen at its worst in New York City is true on a smaller scale across the country

8 Million More Living In Poverty, 9 Million Small Businesses In Danger Of Closing, 10 Million Behind On Rent

“But that’s Michael Snyder,” you say. “He probably ran through school as a kid pulling fire alarms just for fun. He always sounds panicked.”

Ah, but there are plenty of solid facts behind his headline. While the rich are getting richer all over again, the Federal Reserve says America has 10-million fewer employed people than there were a year ago. Most of us are not feeling that pain because we have been under general anesthesia in the form of government and Fed welfare, which has actually pumped up the personal bank accounts of many of the unemployed; but what you have to see is that they are now dependent on that welfare for the long term.

You have to wonder how long the government can maintain these extraordinary gifts of money now that bond investors are getting nervous, which is causing the cost of federal debt to rise. You have to wonder how long landlords and banks can survive the forbearance laws that are helping keep the bank accounts of the forcefully unemployed flush. Even with all of that, more than 8,000,000 Americans fell into poverty in just the last six months.

The truth is that one-third of all small businesses in the US say they won’t survive the year without more government support. That is a lot of shuttered businesses lining the streets of your town by year’s end. Apparently, the market is pricing in hot air, not reality.

The truth by the broadest measure — the old standard of GDP — is that the economy that was predicted to have fully recovered by this March is not only far below where the trend line was headed before COVID, but we haven’t even caught up to the same level we were at right before the COVID lockdowns began.

That line looks pretty badly broken to me … a year after all of this began. So, on the one hand, we still hear about the world the stock market believes in –the world most financial writers actually think is real — and, on the other hand, there is the world as it is — the badly busted line above, which looks far more severe and deeply damaging than the comparatively gentle dip of the Great Recession at the left end of the graph.

It’s hard for me to even imagine how anyone could believe in the world that the market’s champions believe in. It defies all sensibility to my mind. I think the world has gone insane. I’ve been saying recently the market was more precariously perched than at any time in history — totally out of touch with the broken line shown above. Now, at last, the the supposedly wise market seems to be getting schooled a little by some competition from the bond vigilantes.

Those in the NYSE pit will have a lot of cleaning up to do when the market finally catches on to and catches down to reality because reality isn’t about to catch up to it! I’ve held that line consistently, and I see no reason to revise my thinking.