June 24, 2022 America the Beautiful is Broken
June 22, 2022 It Was Hell Week, and the Fed Can’t Handle the Heat
June 16, 2022 S&P Confirms Inflation Killed the Stock Market and Has ALREADY Sent us into Recession
June 13, 2022 INFLATION: It’s Much Worse than we Thought … but Wait until this Little Monster Grows Up!
June 10, 2022 Two Primary Pointers to Recession are Rapidly Diving Deeper

Thirteen Major Fails: a Quick Rundown of our Rundown Economy

During the Roaring Twenties would anyone have believed you if you told them about the depression and the dust-bowl years that were soon to come? Would they have believed their celebratory excesses during such a “strong economy” could possibly leave them collapsing into the dustbin of history that followed?

I don’t think so. If I gauged what I say in times like these by the public’s willingness to believe me, I wouldn’t have much that is worthwhile to say.

Thirteen fail factors too big and too obvious to deny

Without going into any of the analysis used in my recent series of Patron Posts to explain and substantiate how deeply distressed our economy is, I want to give everyone a quick point-by-point summary of just how ugly this pig really is. (There is not enough lipstick in the world to make it pretty.) So, here goes:

Anyone who thinks this economy is strong and that markets stand even a ghost of chance in weathering all of that is delusional at best. If you’re going to fly Fed Scarelines, you had better pack yourself in a massive bouncy suit if you want that soft landing because it is going to be the thrill ride of your life. A major wakeup call is in the works as markets realize the Fed is not going to come and save them this time. Previous big Fed fails would have been far worse if the Fed had not reversed its promised course and gone back to full-on QE. The Fed cannot so readily do that this time around, and its promised tightening is much more severe than the times when it tried to back away from stimulus, as it did in 2011 only to go back into it in 2012 because its recovery was failing, or when it tried to actually tighten and failed spectacularly as it did in 2018.

The current consumer (and CEO sentiment) downturn can be most accurately compared back to when US Census Bureau sentiment fell to this same level just before the dot-bust and its recession and to when U-Mich sentiment fell to the present sentiment level just before the Great Recession. A much less significant drop in each measure of sentiment occurred in 2011 as we came out of the Great Recession when people suddenly feared we were going into a second dip of the recession because the Fed had pulled life support, which recession was only averted by even greater QE from the Fed. That kind of recession-averting Fed reversion back to easing will not be so readily forthcoming this time, and that drop in sentiment back in 2011 was a mere stumble compared to the present plunge: 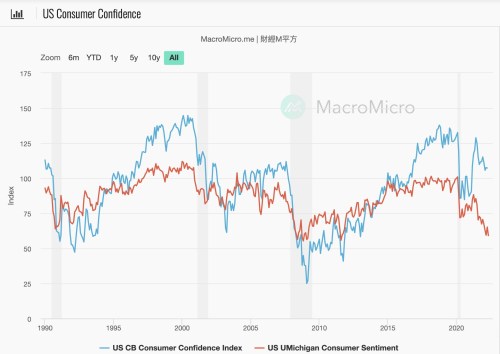 As you can see, plunges in sentiment like we are seeing right now only go this far during a recession. People don’t need the government to tell them we are in a recession to start feeling like we are in a recession. They may need the government to say it before they will admit their feelings were right. 2020, of course, was the cliff dive of all dives because of the unprecedented global lockdowns and fear of a plague upon us. Even so, the U-Mich survey has plumbed a far deeper level than it did in 2020 and is now back at the bottom it hit in the pit of the Great Recession. Census Bureau reported sentiment, however, always runs higher at first and then alway plunges lower. So, it has some catching down to do just as it did in 2000.

When sentiment merely stumbled a little back in 2011, the Fed intervened with a huge preemptive move back to QE — something that cannot happen as a lifeline this time. Back then, the Fed had only minor 3% inflation to deal with. So, it didn’t even attempt to raise interest rates, much less to reduce its balance sheet. It just leaped back to QE when the economy faltered, and the economy did not falter as much as it already has. The lowest quarter in that period was over 1% GDP growth, not minus 1.4%.

This time, unliked all others, the Fed is facing the inflationary battle of its lifetime due to its own grossly misguided policies, and the current drop in sentiment for scale looks much more like the plunge that preceded the Great Recession than like the dip in 2011. So, hang on because sentiment — how you and I and everyone else on average feel — is going to get a whole lot worse going down the hills before us as the Fed attempts the greatest tightening in the history of the world.

What the graphs say to me is that everyone is feeling it, even while few are openly acknowledging it. Trust your gut on this one. The graphs show nearly everyone’s gut from — CEOs to floor sweepers — is feeling a downturn they don’t want to admit out loud. 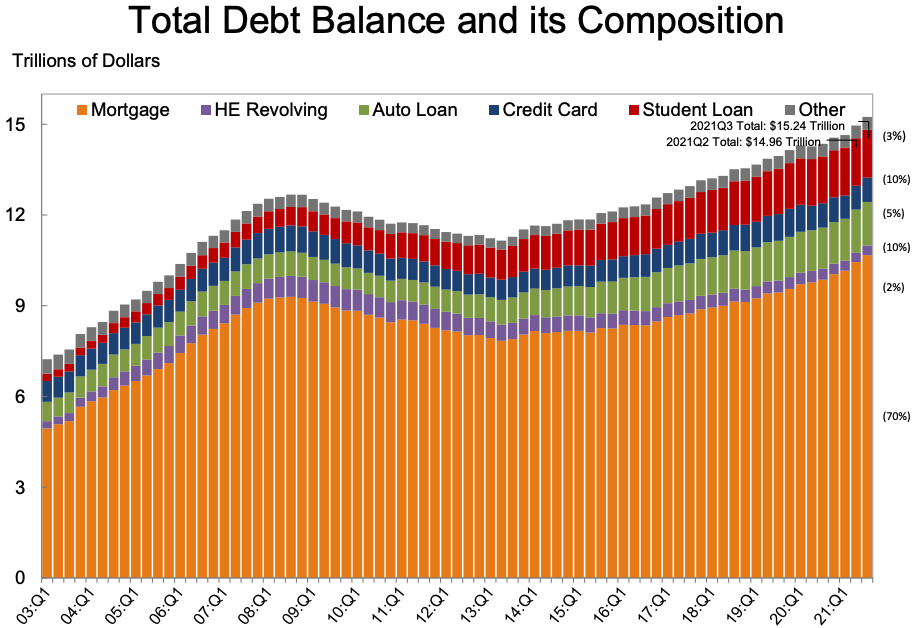 That’s the exploded view. On the longer scale, that looks like this:

Clearly, this unprecedented mountain of consumer debt, which I mentioned in my list, leaves us far less resilient to withstand the Fed’s plan to rapidly raise interest rates in an already badly flailing economy and simultaneously start sucking money out of the economy in June. It’s a suicide pact.

Imagine you are going to ski down that mountain of debt from its ultimate summit and then fly off the lower summit like it’s a ski jump … and for scale you’re that little blip to the right of the jump. It’s going to be a heck of a leap! Better pack on the bubble wrap, Buttercup, because you’re about to jump off the Everything Bubble!