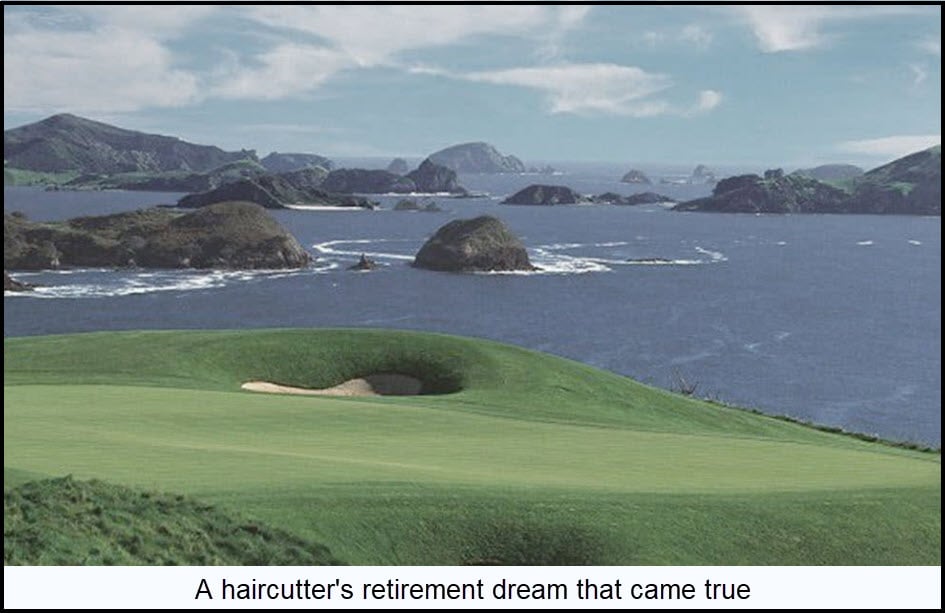 [Louis Piro, my barber when I lived in Mountain View CA shortly before Google arrived, became a multimillionaire with a simple investment strategy. I thought of him the other day when a Rick's Picks subscriber wondered aloud in the chat room which investments are most likely to prosper in the recessionary hard times that Americans will soon face. The subscriber evidently favors the shares of gold companies that pay dividends. My own choice comes straight from Louie's playbook: invest in utility companies that serve growing populations and that have good dividend histories. Thus did Louie's initial, $100 stake in a Nevada purveyor of water and power seed the wealth the haircutter was to amass over the next 50 years. Following is his story, as told in a column I wrote for The San Francisco Sunday Examiner 25 years ago. I have published it here before, but it seems more relevant than ever now, as investors try to figure out which stocks will be favored by the flight to safety that could come at any time. Louie's remarkable saga holds promising investment implications as we watch Californians, New Yorkers and other blue-state refugees flee economically doomed regions of the country for better lives in Florida, Texas, Utah, Tennessee and a few other states that are not so heavy-handed in the way they regulate businesses, schools, commerce and free speech . RA ]

If there is a single word to sum up the success of investor Louis Piro, that word is "dull." Piro has never made a killing on a stock. He doesn't play hunches and he runs from hot tips. He says he passed up Pfizer not long ago because its shares were too pricey even before impotent men started flocking to their Viagra pill for a cure. Nor will Piro sell anything from his portfolio. He just keeps buying -- and then only with money he knows he won't need any time soon. He adds stock whenever the price drops substantially. Piro shuns companies that sell products or services he can't understand, and he has never even owned a share of a Silicon Valley upstart. His favorite word -- "dividend" -- could be the mantra of a successful hypnotist. Zzzzzzzz. Finally there is this pearl, the cliché that underlies nearly every investment decision that Louis Piro has made in the last 45 years: "Buy shares in companies that will grow with America."

That Piro, 63, could have amassed considerable riches by following such homely rules is probably not unusual. What is striking, however, is the remarkable degree of his success, and the singular details of his journey. He is a wealthy man by any measure, with a sizable portfolio of stocks, bonds and, until recently, real estate. But he was not thinking about getting rich when he began to funnel his spare cash into the stock market 45 years ago. At the time, he was 18 and just starting a lifelong career at Al's Barber Shop on Main Street here. His goal was simply to build a little nest egg. "I knew then that when I retired, all I would be taking with me was my clippers," says Piro. "There were no IRAs or tax-sheltered savings back then, so it was a question of creating some security for myself."

Early on, the barber was literally investing all of his spare change, about $5 a week. "Every time it grew to a hundred dollars, I bought some more stock," he says. The first was Pacific Enterprises, a natural gas company. Piro didn't find that one himself -- he learned about it from a customer whose seemingly cushy retirement was well supported by Pacific's generous dividends. Three shares of Pacific was all Piro could afford, but he took the customer's advice and held onto them, always reinvesting the dividends. It has since grown to 2,000 shares.

He has repeated this pattern in dozens of stocks and funds. His portfolio bulges with shares of Lucent, Coca Cola, Pacific Enterprises, Wisconsin Energy, AirTouch Communications, Pacific Gas & Electric, Bank of America and California Water Services, to name a few. There are also sizable blocks of Southern California Edison, USX/Marathon, GT&E, AT&T and Sierra Pacific, as well as a slew of bond- and growth-oriented mutual funds offered by Vanguard, Prudential, Franklin and Benham. Tax-free bonds and annuities round out the list.

Piro, who everyone on Main Street calls Louie, doesn't gloat about his net worth, nor is he eager to tell the world exactly how much stock he owns. About all he'll say is that he's not worried about retirement, which is coming up soon. The building that houses Al's Barber Shop is scheduled to be razed in a year, and that's when Piro plans to trade in his scissors, shears and comb for a set of golf clubs and tickets to exotic ports and destinations around the world. He says that, God willing, he and his wife Ann will be able to do as they please for the next 30 years -- without having to sell a single share or bond from his portfolio.

To anyone who dreams of retiring well on interest and dividends, he would offer the following advice:
* Don't fear bear markets. They come and they go, but if you buy stock in good companies, their shares will always recover.

* Don't ever sell any stock. If your reasons for buying are sound to begin with, the shares can only go higher over time
* Buy more stock whenever the price drops substantially.
* Look for companies whose growth reflects the growth of America as a whole. Water, gas and electric companies will always be winners in states with healthy economies.
* Favor stocks with generous dividends, and plow every penny of it back into those stocks.
* Don't be too conservative. Life is a gamble, and you'll never win if you settle for the meager returns of CDs or passbook accounts.
* Never go for the quick profit, and be patient enough to hold onto good stocks when they hit the inevitable rough patch.
* Invest with money you don't need so that you are not pressured by financial adversity or bear markets to pull out of stocks.
* Buy confidently when fearmongers flout common sense.

In the depths of the 1990-91 recession, when Bank of America was trading at $7 a share, Piro says he bought heavily because he was so sure the bank wouldn't go under. This may seem obvious now, with the stock's value up almost fifteen-fold, Piro notes, but it surely wasn't then. Piro says he could never have done so well if his wife had not been willing to help shoulder the sacrifice of setting money aside regularly. Luck was in his corner, too. "You've got to have a little help from somebody," he says, "and the Lord has been very good to me.  [Click here for a link to my most recent interview with Howe Street's Jim Goddard. We talk about, among other things, how the coming deflation will change people's lives. RA]