14 hours 47 minutes ago
COT Silver Report - August 12, 2022
1 day 23 hours ago
Was $18 Silver the Bottom? Next Pivot? - Lawrence Lepard
3 days 2 hours ago
Silver Coin Premiums – Another Collapse?
4 days 1 hour ago
The End Game for Silver Shenanigans...
5 days 1 hour ago
The Fed Is All Talk, and JPMorgan Trial EXPLAINED - Chris Marcus

Why Copper's Stall Is Ominous 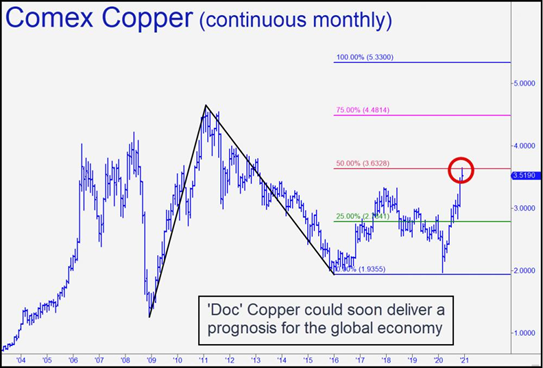 Copper prices are up 75% since cratering in March at $1.97 a pound. Since 'doctor' copper, with a supposed PhD. in economics, has a reputation for accurately predicting growth trends, does this mean a global boom is at hand?  This seems most unlikely, given the vast expansion of public debt used to temporarily counteract the economic effects of the pandemic.  The debt, many trillions of dollars' worth, is the direct cost of supposed stimulus, which, as any idiot can see, has catalyzed asset inflation rather than real economic growth. Unfortunately, when the party ends there is no way we will evade repayment, even if it means depreciating the dollar to zero via hyperinflation.  There is only one alternative, a deflation that would effectively cancel all debts with a wave of bankruptcies at every level of the economy: public, corporate and private. Neither path is palatable, but it is virtually certain that one or the other, or perhaps both sequentially, will occur, since our collective debts have grown far too large to repay with hard money.

Concerning the chart, it shows that copper prices have stalled in a very crucial place, precisely at a $3.63/pound 'midpoint Hidden Pivot'. If the rally had instead impaled the resistance or gapped through it on first contact, it would have implied beyond doubt that prices were headed to the pattern's $5.33 target. That would be an all-time high and in theory indicative of strong global demand for copper. Could that possibly be right?  No, it could not; far more likely is that it would reflect a blowoff in purely speculative demand for tangible assets. No boom in manufacturing is coming because making things is no longer the ticket to wealth. The big money lies in 'doing deals' with grotesquely inflated paper assets, and in advertising widgets, as Google and Facebook do, rather than producing them.  If you want to know where the financial system is headed, and how quickly it could get there, keep your eye on the $3.63 pivot price in Comex copper.