Is Your Bank Safe? - A Look At JPMorgan

Over the last few months, we have written several articles outlining our views of banks in general. We explained the relationship that you, as a depositor, have with your bank is in line with a debtor/creditor relationship. This places you in a precarious position should the bank encounter financial or liquidity issues. Moreover, we also outlined why reliance on the FDIC may not be wholly advisable. And, finally, we explained that the next time there is a financial meltdown, your deposits may be turned into equity to assist the bank in reorganizing.

So, at the end of the day, it behooves you, as a depositor, to seek out the strongest banks you can find, and to avoid banks which have questionable stability.

While we outlined in our last articles the potential pitfalls we foresee with regard to various banks in the foreseeable future, we have not provided you with a deeper understanding as to why we see the larger banks as having questionable stability. Over the coming months, we intend to publish articles outlining our views on this matter.

First, we want to explain the process with which we review the stability of a bank.

We focus on 4 main categories which are crucial to any bank’s operating performance. These are: 1) Balance Sheet Strength; 2) Margins & Cost Efficiency; 3) Asset Quality; 4) Capital & Profitability. Each of these 4 categories is divided into 5 subcategories, and then a score ranging from 1-5 is assigned for each of these 20 sub-categories:

Afterwards, we add up all the scores to get our total rating score. To make our analysis objective and straightforward, all the scores are equally weighted. As a result, an ideal bank gets 100 points, an average one 60 points, and a bad one 20 points.

If you would like to read more detail on our process for evaluating a bank, feel free to read it here:

But, there are also certain “gate-keeping” issues which a bank must overcome before we even score that particular bank. And, many banks present “red flags,” which cause us to shy away from even considering them in our ranking system.

As mentioned before, it is difficult to overestimate the importance of a deeper analysis when it comes to choosing a really strong and safe bank. There are quite a lot of red flags to which many retail depositors may not pay attention, especially in a stable market environment. However, those red flags are likely to lead to major issues in a volatile environment. Below we highlight some of the key issues that we are currently seeing when we take a closer look at JPMorgan (JPM).

In our view, JPMorgan is one of the best U.S. mega banks. It is a well-run institution and its business and overall fundamentals have significantly improved over the past 10 years. However, even this high-quality franchise has quite a lot of red flags, which, in our view, could lead to major issues for depositors in a bear market. As such, we believe JPMorgan’s clients should be aware of those red flags, which are often unnoticed in a rising or even a stagnating economy.

If we look at JPM’s headline earnings release, we will see that its loan book looks quite conservative, with credit cards representing just around 14% of the bank’s total credit portfolio as of the end of 2021. This looks especially good, when compared to the respective share of Citi (C), which was 56% as of the end of the same time period.

However, a closer look at JPM’s 10-K form reveals a different picture. As the table below shows, the bank also has lending-related commitments, which bring total credit card exposure to $885B, much higher than $143B, which was seen in the headline press-release. For comparison, residential real estate loans were $225B.

Importantly, these credit cards-related commitments represented 70% of the bank’s total lending-related commitments as of the end of 2021. As shown below, JPM’s total credit portfolio is $2,457B, which suggests that credit cards’ share is 36%, much higher than 14%, which shown in the bank’s headline press-release. If we add other consumer loans, then JPM has $1,208B of non-mortgage retail loans, which correspond to 49% of the bank’s total credit portfolio. This implies that JPM’s loan book has a less safe risk-profile, when compared to what shown in the headline press-release. 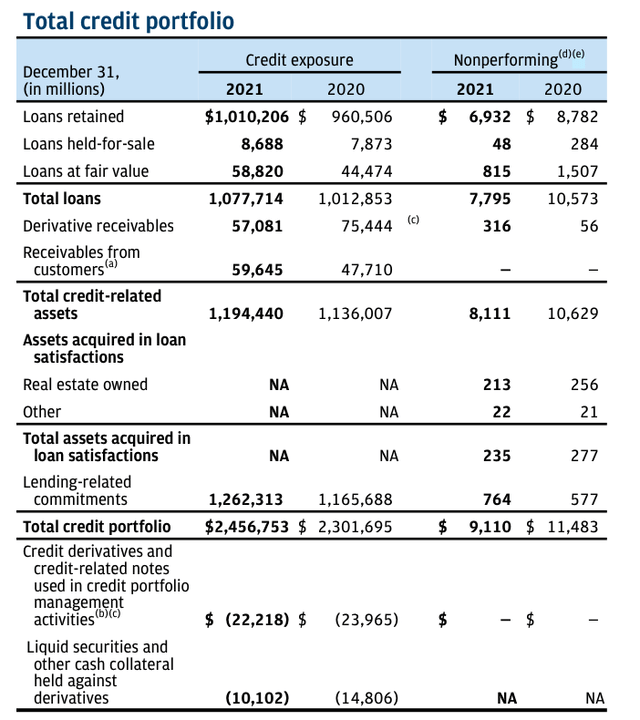 AFS and HTM securities books look conservative; however, trading assets and OTC derivatives are a concern

The bank’s AFS and HTM books look quite conservative, especially when compared with, for example, Citi’s ones, which we discussed in detail in our article on Citi. There are some non-U.S. sovereign bonds, but their share is low. 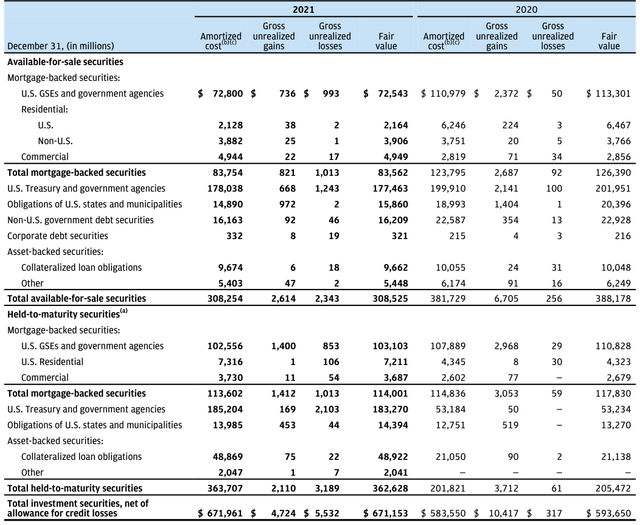 Trading assets look less conservative as there is exposure to equities, which were around $100B as of the end of 2021. 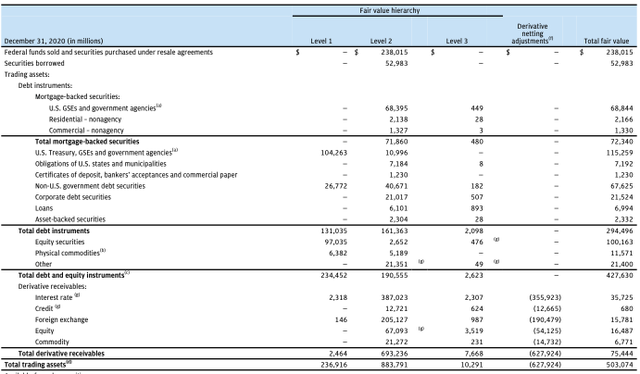 The bigger concern is a quite large share of over-the-counter (OTC) derivatives. 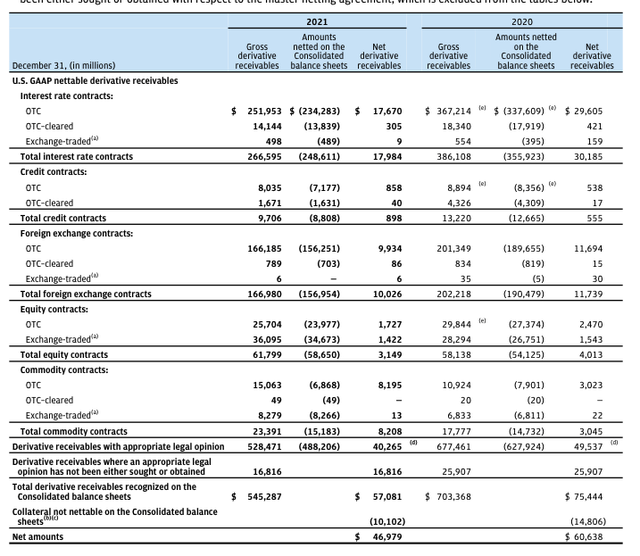 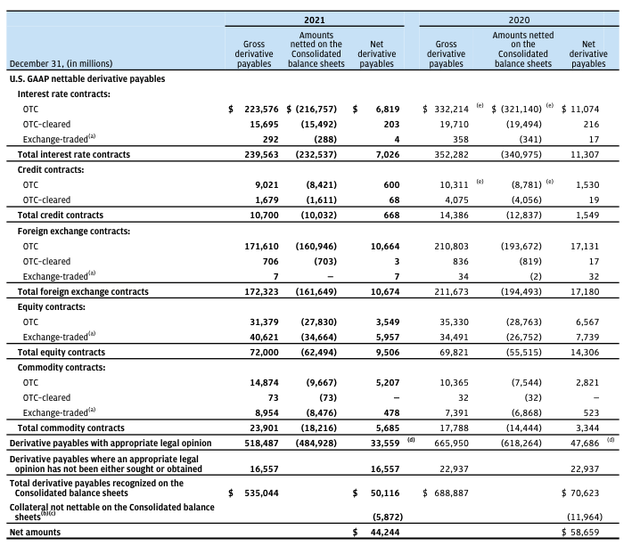 As a reminder, we would like to again highlight a note on the difference between OTC, cleared and exchanged derivatives, which Citigroup has made in its 10-K, as it is relevant for JPM as well:

“Over-the-counter (OTC) derivatives are derivatives executed and settled bilaterally with counterparties without the use of an organized exchange or central clearing house.

It should come as no surprise that OTC contracts are the riskiest type of derivatives, especially in a recessionary environment when there is a high chance of a counterparty default risk.

In June, the Fed published stress-test results for 33 U.S banks. As shown below, under the severely adverse scenario JPM posted a net loss of $40.9B or almost 20% of its CET1 capital as of the YE2021. As we noted before in our article on Citi, the Fed’s assumptions for its severely adverse scenario are quite mild, in our view. In particular, Fed assumed a relatively short-lived market correction and a V-type recovery of both the markets and the global economy. As such, it might come as surprise for many depositors that even such a solid bank as JPM would lose almost 20% of its capital even in a mild recession. 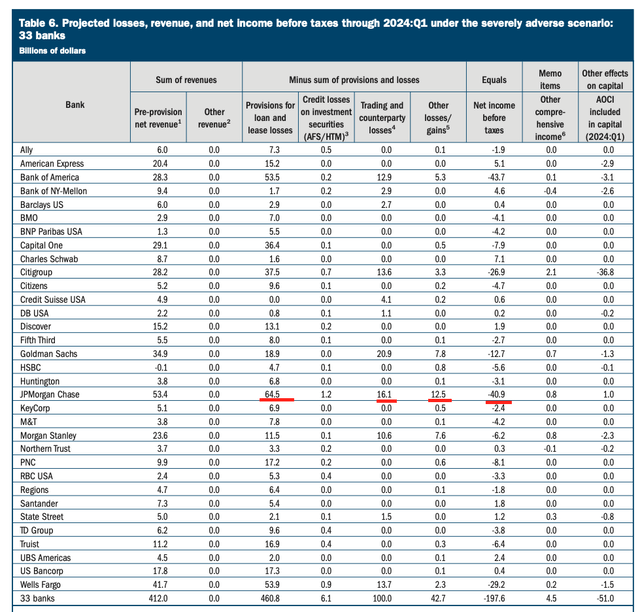 In contrast to JPM, the Top U.S 15-banks we have identified at SaferBankingResearch.com have a low-risk loan mix with minimal exposure to unsecured lending and have very conservative securities books, which consist predominantly of U.S Treasuries and U.S municipal bonds, and do not have any derivatives on both their balance and their off-balance sheets. Moreover, JPM has more red flags, which we did not discuss in detail due to the limitations of the article, such an increase in RWA (risk-weighted assets) in a volatile environment, a compression in the bank’s fee income, and the bank’s off-balance sheet items. However, all our Top-15 banks have been tested for these red flags to ensure their long-term stability.