17 hours 43 minutes ago
The Short Position in SLV
23 hours 49 minutes ago
Here Is Why Silver Demand Will Climb to a New Record High! - Keith Neumeyer
4 days 1 hour ago
This Is Why NOW Is the Perfect Time to Buy Silver - Garrett Goggin
4 days 1 hour ago
Rico Charges Dropped On Silver Manipulation Trial
4 days 22 hours ago
Has Inflation Been Defeated? 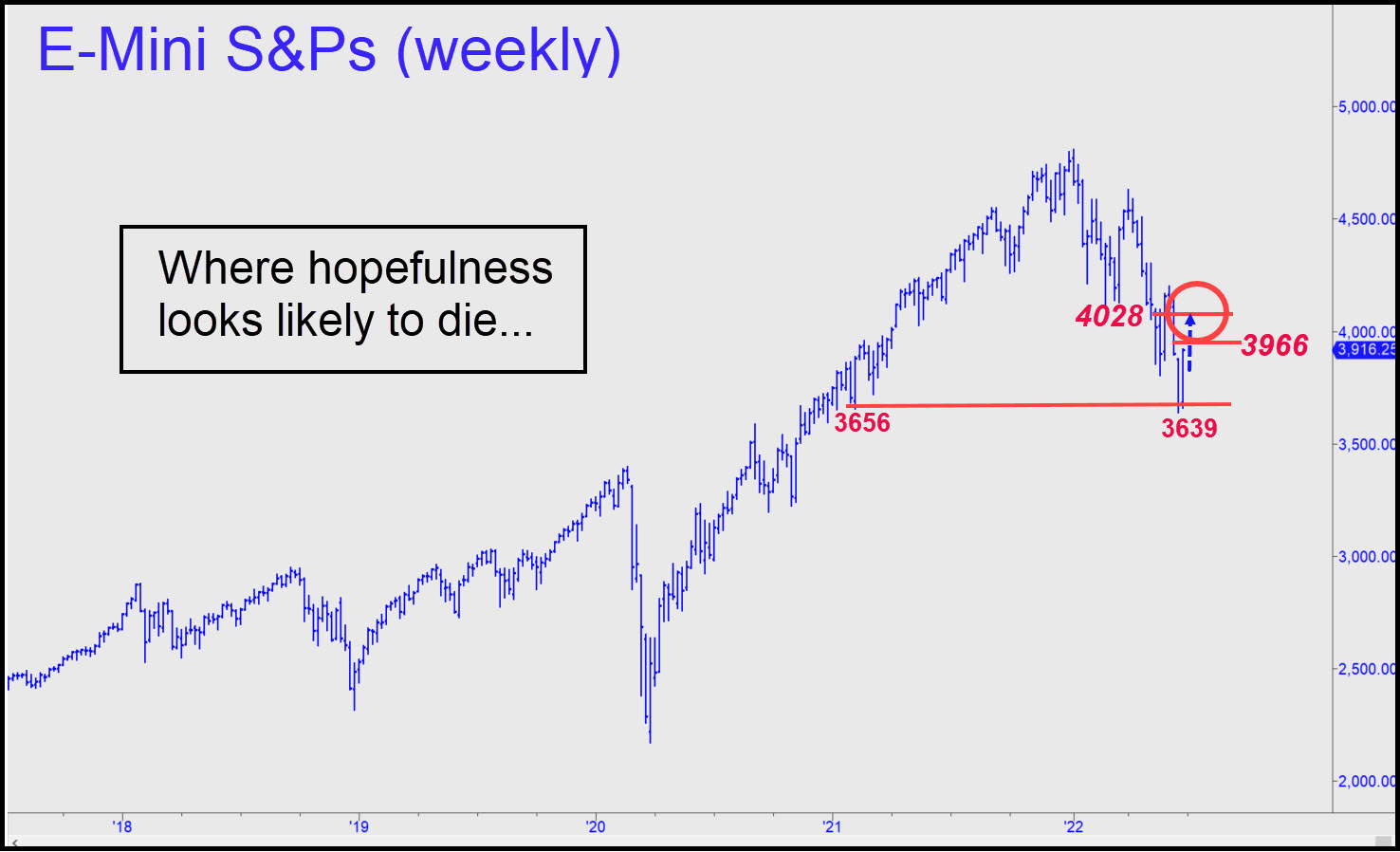 The chart above is intended to take some of the guesswork out of determining how high this presumably doomed stock-market rally is likely to go. Not very, would be my guess. I say the rally is doomed for a few reasons, none of which has anything to do with a U.S. recession that began months ago, or a real estate collapse that is still in the anecdotal stage but quite real and menacing nonetheless. My assessment is based purely on certain subtle technical signs evident in the chart. First is the S&Ps' breach of a 3656  'external' low recorded back in February. The overshoot was just 17 points, or 0.46%, but that was sufficient to generate a strong impulse leg of weekly-chart degree. What it implies is that any rally off the June 17 low will turn out to have been corrective -- or to use a more descriptive word, distributive.

Since we 'know' the rally is just a bear squeeze, predicting where it is likely to apex is possible. I have used a 'reverse-pattern' feature of the Hidden Pivot Method to calculate prospective rally targets at, respectively, 3966 and 4028. If the S&P mini-futures were to exceed the first by more than 5 or so points intraday, that would imply more upside to the second. Both are bound to show stopping power sufficient to be short-able, and that is what I would suggest to Rick's Picks subscribers.

This scenario is by no means chiseled in stone, and I would be inclined to give the rally wide berth if it impales the higher number the first time it is touched. That would suggest that a bear rally worthy of the name is under way. If so, it could be expected to continue to whatever height is necessary to cause even your editor to think new all-time highs are possible. So far, though, bears have hung tough, refusing to be spooked into short-covering that would allow portfolio managers to distribute shares to the rubes at fat prices.

In the meantime, and as we know, horrendous headlines concerning the economy are rarely sufficient to crash a stock market. But U.S. shares will not long remain a relative oasis for investors when the global economy starts to implode. This is certain because a strengthening dollar has made oil and everything else paid for in dollars increasingly unaffordable for most of the world. Americans benefit from this, but it is the growing cost of paying off debts in strengthening dollars that will be their undoing. Oil prices will plunge in the global downturn, but any relief this will bring at the pump will be overwhelmed by the broadly ruinous effects of debt deflation.