The 800-Pound Tapeworm in the Room 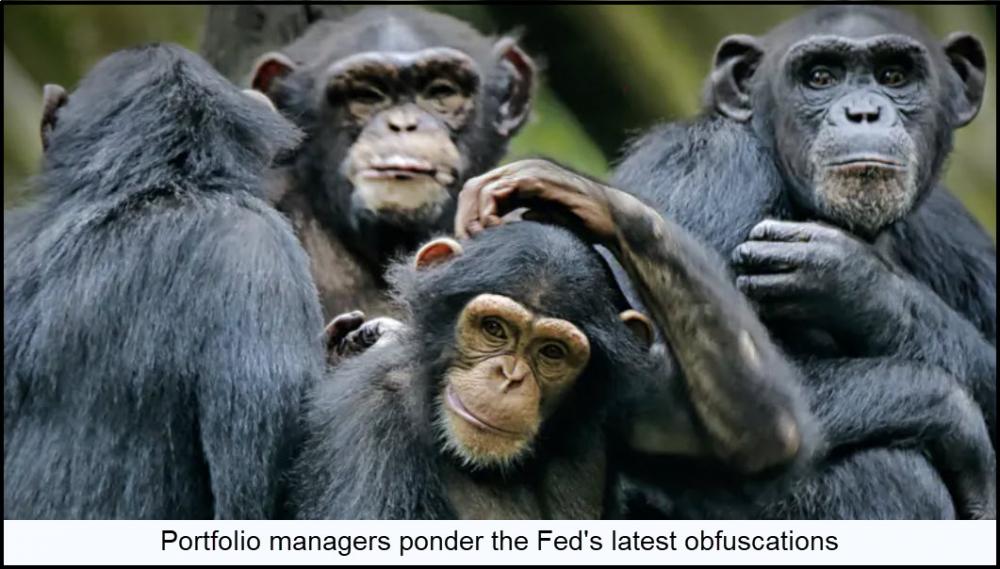 Jackson Hole hubris was operating at full strength last week as investors around the world anxiously awaited the announcement on Friday that would send the markets into hyperdrive. The broad averages had in fact churned impassively for several days ahead of whatever lame twaddle concerning The Tapeworm lay in store. The question of when the Fed will begin to tighten following a loosening binge that has persisted more or less continuously for a hundred years is the focus of portfolio managers' tiny, febrile brains these days. How quickly they forget! For taken together, the last dozen or so Tapeworm utterances, hints and titillations would seem to imply that if tightening is coming at all -- which everyone knows it is not -- it's unlikely to commence before, oh, maybe the end of 2022 or, for good measure, 2023. Vague enough for you? This dovish meme has been recycled so many times that it's a wonder it can still send shares soaring. And yet it does, alternating with fleeting dips of feigned fear and dread whenever the Fed even whispers that it will someday be necessary to bring its surreal balance sheet into a semblance of control. Colloquially this is known as "taking away the punch bowl," an annoyingly dumb cliche coined by a benighted news media to make the somewhat esoteric concept of tightening go down easier with readers who are rightly confused about the bottom line.


Getting High in August

Still, you have to give the charlatans who manage our expectations their due, since they've riveted investors' attention whenever someone affiliated with the central bank farts, burps or clears his throat. On Friday, Fed Chairman Powell did all three, metaphorically speaking, in promising there would be some tapeworming of monthly bond purchases by  the end of this year. We've heard this so many times before that if you bet on it, be sure to get odds, since Powell and his colleagues fully understand that any real tapeworming would send the global economy into eclipse for a decade. Their alternative is to keep talking, and it must be conceded that this strategy seems to be working, at least for now. Considering that Powell's mildly hawkish speech on Friday pushed stocks sharply higher, it would appear the Fed has got spin control dialed-in. If so, it would not be the first time that investor ebullience, along with the stock market, reached frightening heights in the month of August.

Meanwhile, although it's impossible to predict when the obligatory, dovish take-back is coming from the spinmeisters, it is as certain as the next sunrise and apt to follow a punitive selloff on Wall Street. Keeping the stock market pumped is all the Fed really cares about anyway, but it requires bigger and bigger lies to hide this unseemly fact.  It helps that the hacks who invent the news are fully onboard and brainwashed to believe Americans can borrow-and-spend their way to wealth and prosperity. Moreover, because the news media have been conditioned to hang on every nonsensical word from the central bank, even a low-level Fed functionary can impact global securities markets just by reeling off a few scripted bullet points at a Rotary Club luncheon. This dynamic resembles the relationship between the press and corporate muckety-mucks who quiver in their Guccis whenever they have to face some hack reporter dispatched to sound them out on the topic du jour. The scribes invariably report out the story with proper awe and fear, filing dispatches that in the Fed's case would have us believe they've got everything perfectly under control. Yeah, sure.

The fund managers know better, of course, even if we tend to think of them as chimpanzees whose buying 'decisions' mainly entail force-feeding Other People's Money into a handful of FAANG stocks while constantly rotating a bunch of others to make investors think their savings are hard at work. So if the chimps are slightly smarter than we tend to think they are, why do they drive shares wacky every time the Fed roils the air with flatulent piffle we've heard a hundred times before? The answer lies at the heart of the stock market's embarrassing histrionics, which are simply a reflex, like an earthworm writhing in strong sunlight. As implied above, investors big, small and in-between have their testicles/pudenda wired directly to the Fed's PR 'defibrillator'. Thus, even the smallest jolt of ludicrously mis-imagined news will tend to induce violent spasms. However, they occur not because investors or anyone else take the Fed's insultingly stupid obfuscations seriously, but because they fear that all the other idiots in the money management business will react to those obfuscations in the way they've been hired to react. Machines do the actual buying and selling when the 'news' hits the tape, but if the algorithms appear panic-stricken, it is only because they've been programmed to anticipate the bipolar behavior that accounts for most price movement in so-called 'securities' markets. It is left to stockbrokers, analysts and the news media to explain why these reactions are not only rational, but healthy and, ultimately, bullish.