17 hours 44 minutes ago
The Short Position in SLV
23 hours 50 minutes ago
Here Is Why Silver Demand Will Climb to a New Record High! - Keith Neumeyer
4 days 1 hour ago
This Is Why NOW Is the Perfect Time to Buy Silver - Garrett Goggin
4 days 1 hour ago
Rico Charges Dropped On Silver Manipulation Trial
4 days 22 hours ago
Has Inflation Been Defeated?

Another 3% and You Can Kiss the Rally Goodbye 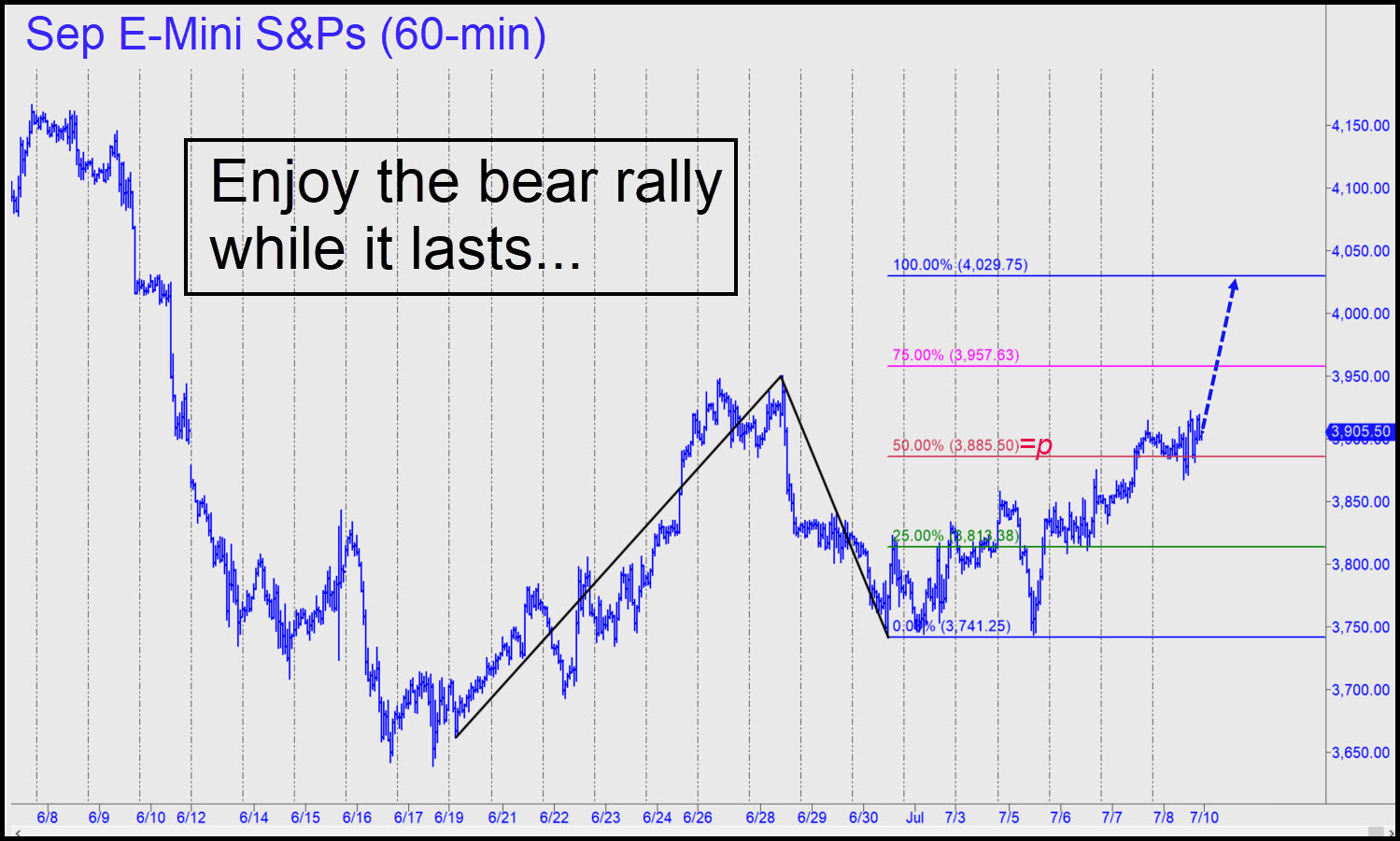 How high is the bear rally begun in mid-June likely to go before buyers run out of gas? The 4029.75 target shown in the chart is a logical answer, even if the hubris of billboarding it here could queer its voodoo magic. A run-up to 4029 would represent a 3.1% gain over Friday's close and a 10.7% move off the June 17 low. Since January, when the bear first showed its fangs after hibernating since 2009, rallies have been relatively subdued, implying shorts have yet to be spooked into covering. Perhaps it's because the outlook for the U.S. and global economies is so dark that there are few good reasons to be discovered for buying shares. Not that buyers have ever needed reasons, let alone good ones. But even bad ones lack persuasiveness these days, what with the the 'experts' debating how much recession we're likely to get.

Triggering off short-covering stampedes will always be a primary concern of the stock market's canny institutional sponsors. That's because short-covering is the only kind of buying powerful enough to push the broad average past previous peaks. It also has the miraculous ability to make investors temporarily put aside the wall of worry no matter how mountainous. The effect can produce waves of mass insanity so irresistible that even now, with the U.S. economy about to tank, a stock market rally to new all-time highs cannot be dismissed entirely.

This seems extremely unlikely, however, given that residential real estate has completed a blowoff top; the auto sector is being suffocated by high prices and material shortages; and consumer credit growth has turned down as interest rates rise across the yield curve. Under the circumstances, even if a punitive bear squeeze is overdue, investors shouldn't get their hopes too high that it'll come before stocks take another epic leg down.  [How bad could it get as the U.S. recession deepens? Click here for Rick's insightful interview on Friday with Howe Street's Jim Goddard.]