13 hours 42 minutes ago
COT Silver Report - August 12, 2022
1 day 22 hours ago
Was $18 Silver the Bottom? Next Pivot? - Lawrence Lepard
3 days 1 hour ago
Silver Coin Premiums – Another Collapse?
4 days ago
The End Game for Silver Shenanigans...
5 days ago
The Fed Is All Talk, and JPMorgan Trial EXPLAINED - Chris Marcus 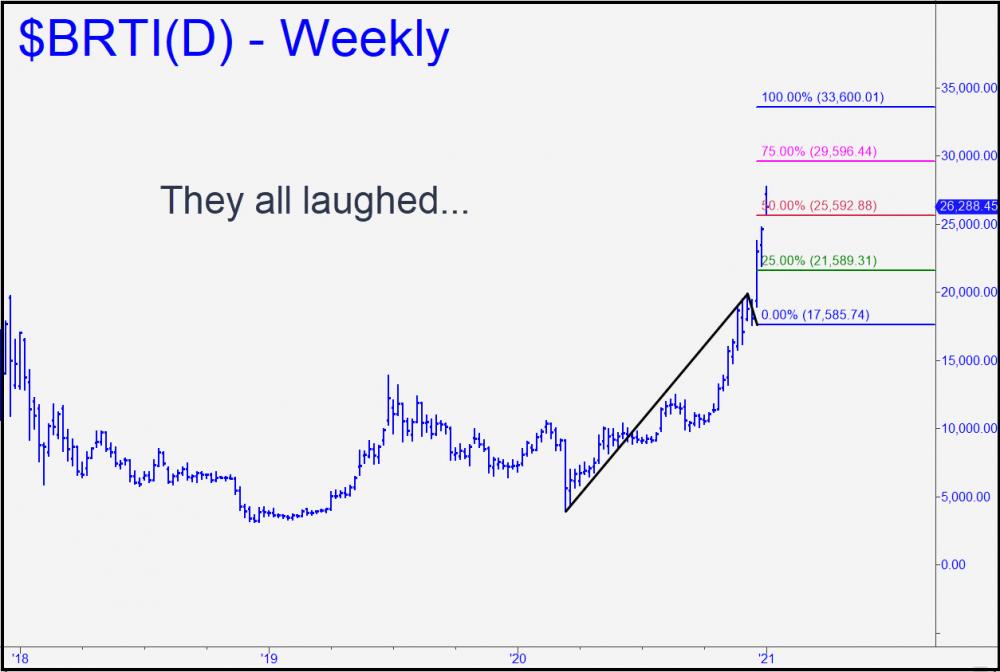 With the post-Christmas resumption of trading Sunday morning, bitcoin tacked on an insane $3,000 in the blink of an eye. Even more preposterous is that a correction that one might have expected to last for at least three to five days appears to have run its course in mere hours. This has raised the prospect of cryptomoney fever achieving yet another record high before dawn. How much farther could the rampage go?  A projection using the Hidden Pivot Method suggests that the next big thrust will hit 33,600, about 6000 points, or 22%, above these levels. But why should it stop there, we might ask, with mass hysteria's Olympus beckoning at 100,000? We'll be better able to assess whether bulls have the gumption to get there once we've seen how they handle the 'hidden' resistance at 33,600. If this proprietary pivot is dramatically impaled on first contact, be prepared for a burst to 50,000, a marquee-quality number that would be in play simply because I will have run out of Hidden Pivot targets.

Support from Billionaires
Disclaimer:  I think bitcoin is, if not an outright hoax, then a cleverly marketed investment scheme on a par with alchemy and cold fusion. I get emails all the time from bitcoiners convinced cryptocurrency should be prized over all other investable assets, particularly gold. The most fervent believers are robinhoodies and millennials with little experience of precious metals, other than as jewelry that old people wear. At gold's expense, they have helped push bitcoin into its second speculative mania, the first having ended woefully in 2018. The collapse that year took it from an all-time high of 19707 down to 3134. The current short-squeeze supernova has much more power behind it, however -- not only from speculative excesses fueled by buyers too young to know about or fear bear markets, but with the support of big-time pied-pipers like Paul Tudor Jones, Stanley Druckenmiller and Twitter's Jack Dorsey, who have been talking their book non-stop since the beginning of the year.

My prediction is that Bitcoin Mania 2.0 will end badly as well, albeit from much loftier heights. In the meantime, look for the smart money to help fan rumors of a Guvmint crpto takeover whenever the sleazeballs want to shake loose supply at relative fire-sale prices. The inevitable corrections promise to be doozies, ripe for trading with 'mechanical' set-ups like the ones we used several years ago to stay confidently on the right side of an insane uptrend. Stay tuned if you need convincing that a tidal wave can be surfed.