January 20, 2022 Stocks and Awe: The Federal Reserve Regime Change is Here!
January 13, 2022 Food Shortages Punching the Populace in the Gut; No Bubble Here, Folks!
January 10, 2022 How Bad Is the Stock Market Route Now, and How Bad Will its Collapse Get?
January 06, 2022 Media Slavishly Praise Strong Jobs Market as Being Saved by Vaccines
December 05, 2021 The “Damned Lies” that Unemployment Tells

Zero Hedge’s favorite quant from Nomura just laid out his measurements and metrics of the bond market that explain why treasury prices puked on Tuesday, and his assessment of what is happening precisely validates the “Big Reveal” that I made for readers here a few days ago when I opened one of my Patron Posts to all readers:

Months ago I forecast exactly what Charlie McElligott is now describing as the cause of this week’s big bond puke, which said it would start to happen between January and March right here:    “The Big Blindspot that Will Bite Bonds and Stocks in the Butt.”

Here is what Chief Quant McElligott is now saying he sees in his numbers in his usual quant code, which aligns with the key factors I talked about in that Patron Post as UST 10Y Yields are cleanly rising through 50, 100 and 200 DMA’s to, while 30Y Yields are nearing a test of the 200 DMA:

This has been my thesis (and basis for predicting stock and bond market destruction) for the past year, saying the following things would play out in the order given below:

The scenario that started playing out on Tuesday, as Nomura read the numbers, is an exact match to the scenario I said to look out for.

The move has led to Treasuries posting their worst start to the year since 2009, sending ripples through markets from Australia to the U.K.….

“Inflation continues to be the major theme of the market…,” said Makoto Noji, chief currency and foreign bond strategist at SMBC Nikko Securities Inc. in Tokyo.

This is the biggest 2-day surge in yields since the chaos in March 2020 amid the bailouts.

And how bad was that for stocks?

As McElligott continues, yesterday there was an outright “Momentum Shock” in the US Equities factor space, with the “Long-Term Momentum” factor absolutely “rekt” -3.5%, a 1d -3.1 std dev move over the past 1Y window and the largest drawdown in the factor since the peak of the meme stock / HF unwind on 1/27/21!

Which is McElligott’s standard quant talk for “In one day, momentum crashed by its worst in almost a year!” Buying switched from the high-flying tech stocks to quality value stocks, so the Dow rose as the NASDAQ plummeted (down 210 points or 1.3%). This can become dangerous when you consider that over 50% of the S&P’s spectacular rise in 2021 was made by the six highest-flying tech stocks. If what went up now comes down, there is a lot of room to fall quickly. Of course, what goes down may also bounce right back up since there remain three months of road ahead for bonds and stocks to battle this out as the Fed taper continues before the Fed is finally out of the QE game altogether.

Translated to plain English, what all of the above means is that instead of waiting until Friday to see where this week’s op-ex chips may fall, the market is trading more or less as it should, and high duration giga-techs are dumping as yields are spiking… just as one would expect. The only question is whether this “logical” behavior will continue – one look at the chart below shows that the Nasdaq has a ways to drop if indeed it is allowed…. 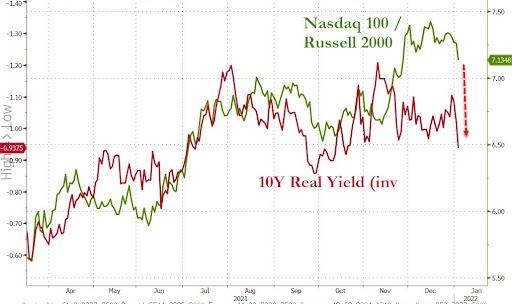 So far, the timing is right, and things are looking pretty solid for my prediction last year that inflation will become so hot and prolonged, contrary to all the Fed and the experts were saying, it will force the Fed to taper and then to taper faster, and tapering will become its own tightening by forcing interest rates up as the Fed releases its grip on bonds, which will kill the stock market if inflation doesn’t kill it directly first by ravaging the economy and eating up profit margins.