2 days 9 hours ago
This Is Why NOW Is the Perfect Time to Buy Silver - Garrett Goggin
2 days 9 hours ago
Rico Charges Dropped On Silver Manipulation Trial
3 days 6 hours ago
Has Inflation Been Defeated?
4 days 20 hours ago
COT Silver Report - August 12, 2022
6 days 5 hours ago
Was $18 Silver the Bottom? Next Pivot? - Lawrence Lepard

Building the Mother of All Tops 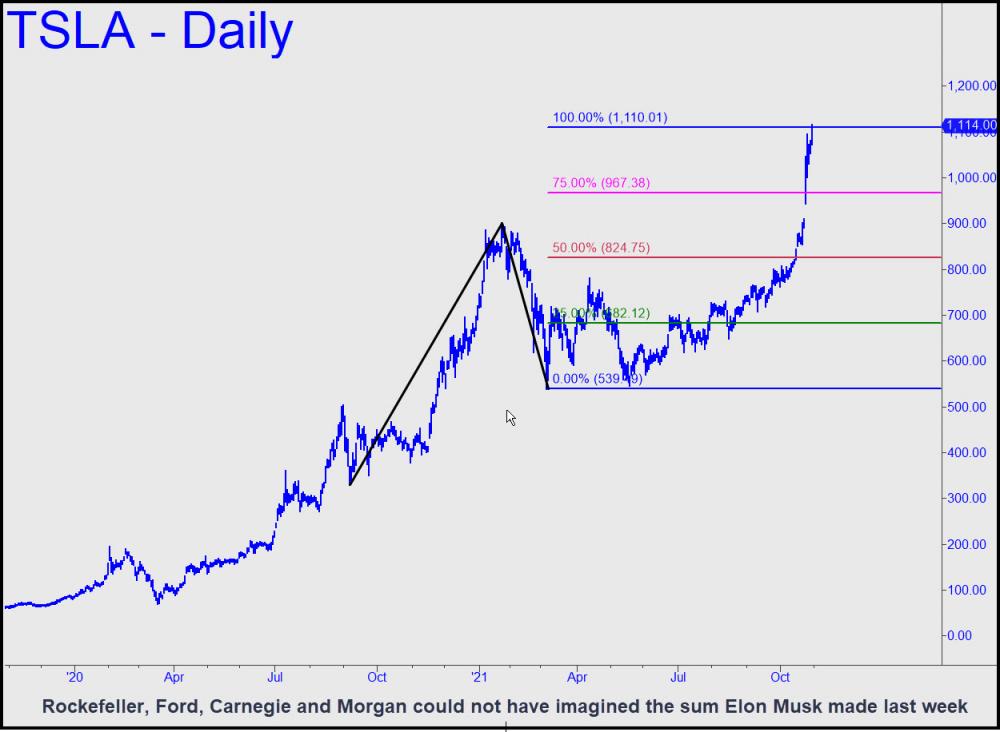 So much for seasonality. Permabears were counting on the cyclical fury of autumn to rebuke revelers, but instead it is they who got rebuked, and badly. The stock market's strong rally during the traditionally difficult month of October has left many wondering what it will take to pop the bubble. It is almost invariably a combination of factors that virtually no one has precisely foreseen. But this time, predicting the onset of the bear's inevitable arrival would seem to require a bigger leap of imagination than in the past. For how does a bull market end when it is supported by seemingly unlimited quantities of money ginned up by the central bank? Deliberately tightening credit cannot be the answer, since the Fed understands that this would not only reverse the bull market precipitously, it would also doom pension funds, the Baby Boomers' retirement plans, artificially high real estate prices and a consumer economy already ravaged by the pandemic. The eventual outcome would be a global economy plunged into deepest depression.  This is coming anyway, but don't expect the Fed to set itself up as the obvious cause.

And so the game goes on. The money from trees finds its way into the stock market in numerous ways, one of them being corporate buybacks. According to a recent article at Zerohedge, fully 40% of the market's rise can be attributed to this source. Some of the companies that borrow for buybacks are sitting on surplus cash of their own amounting to billions or even tens of billions of dollars. Why use real money, they have concluded, when they can borrow it at near-zero rates by issuing bonds to yield-starved investors?  And so they continue to plow borrowed money into their own shares, driving the shares into outer space without producing a dime's worth of actual economic growth. Everyone appears to win in this shell game and it continues at a crazy pace, even if all the players understand full well that a rally attributable solely to inflation is ultimately unsustainable.

The win-win aspect of this epic Ponzi has put up some very impressive numbers. Last week's blowoff in Tesla made Elon Musk the world's richest man, worth an estimated $300 billion. Tesla shares are so pumped that their value has exceeded the combined value of 14 other global automakers. Bill Gates cannot be far behind, since Microsoft's steep climb pushed the company once again to the top of the capitalization heap, just ahead of an Apple Inc. valued at $2.5 trillion. No one believes this craziness can continue indefinitely. But when it finally ends, as it must, the consequences are almost too dire to imagine. That is why the stock market is taking so long to build a top: The coming bear market will have tragic consequences for our way of life. We are about to discover how little of value the 'Information Age' produces, and how illusory its wealth. The Great Depression brought severe hardship to many Americans, but the coming one will be worse because the fall will come from a pinnacle of material affluence paid for with credit.